This Tiktok pasta is worth the hype | Inquirer Lifestyle ❮ ❯ 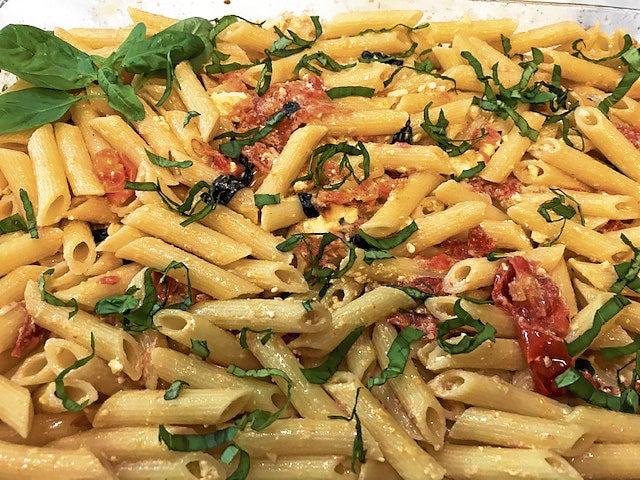 All the ingredients of this easy pasta dish are readily available in Manila.

This Tiktok pasta is worth the hype

It has been described by the Washington Post as being “worth the hype.” And indeed, this recipe for pasta with tomatoes and feta cheese has been doing the rounds of Tiktok and international blog posts for months now, and so far nearly everyone seems to be in wonderment that something that’s so easy can be so delicious.

I learned about this recipe from my nephew Joseph Yap in Sydney, Australia, who posted it on our family chat group. He said he himself has made the recipe and while it gave him heartburn because of all the tomatoes, he would recommend that I try it.

It seems the recipe was first posted by Tiiu Piret in her blog in February 2018, according to Aaron Hutcherson of the Washington Post. However, it was the subsequent post of another Finnish blogger, Jenni Hayrinen, that made the recipe go viral. After she posted it, according to Hayrinen, the stores ran out of feta cheese.

That was enough to prod me to try the recipe myself. With all the ingredients being readily available in Manila, what did I have to lose? On the other hand, if indeed it’s as yummy as thousands of others think so, then I’d have everything to gain.

Suffice it to say that I am now a convert to this baked tomato and feta cheese pasta. In fact, I’d say that if you have only one pasta recipe that you can make for the rest of your life, then let it be this one. After all, what’s easier than just putting half a kilo of ripe tomatoes on a baking dish, drizzling it with olive oil, putting a block of feta cheese in the center, then shoving it in the oven? You just let the oven do its magic for 35 minutes, during which time you can prepare your pasta. Then all it would take is the addition of some grated garlic and basil leaves, and voila! You have a sensational meal.

But what I soon discovered is that this pasta is best when eaten immediately—piping hot and all. That first spoonful of gooey cheese and crushed tomatoes on al dente pasta can certainly warm the cockles of any cynic’s heart. It can make you thank heaven and earth. It can make you glad to be alive. It can even make you forget any other pasta recipe you may have tried in the past. It is that good.

However, the dish does lose some of its appeal after a few precious minutes. When it turns even just lukewarm, it is no longer magical. The cheese becomes gritty, the tomatoes soggy. As easy as it is to make, this dish demands your immediate attention—or you could be in for some disappointment. And that is the trade-off. Easy to make it may be, but its deliciousness is quick to dissipate. Eat it now or forever hold your peace, is what it seems to say.

2 Tbsp salt for the pasta

500 g pasta, such as penne or fusilli

Preheat the oven to 400°F (200°C). Arrange the cherry tomatoes in a large baking dish. Drizzle with the olive oil and season with salt and pepper. Put the feta cheese in the center of the tomatoes.

Bake for 35 to 40 minutes, or until the tomatoes have softened and the cheese begins to melt.

Meanwhile, heat the 8 cups water in a deep cooking pan. Add the salt. Bring to a boil. When the water boils, add the pasta and let cook for 9-10 minutes, or until pasta is al dente. Drain the pasta and set aside. When the tomatoes and cheese have softened, remove the baking dish from the oven. Crush the tomatoes with a large fork then add the garlic and basil leaves. Mix with the cheese and if desired drizzle with additional olive oil.