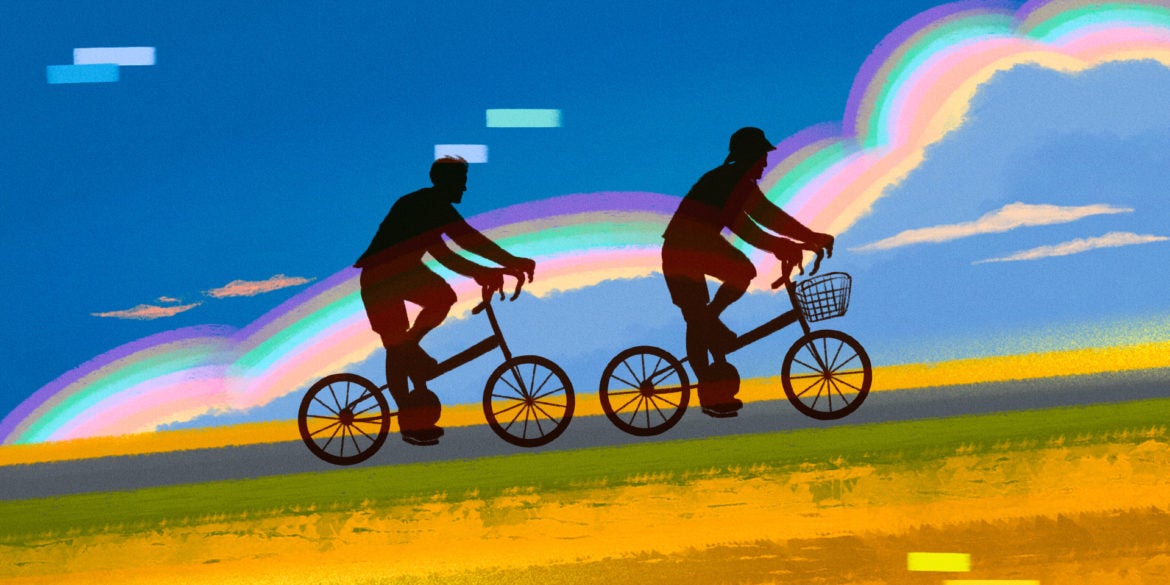 There are other LGBT+ leaders, without doubt—but a lot of them—no, a lot of us—feel distant and untouchable, either too immersed in the work that we do or unable to find ways to connect with the younger crowd beyond the online spheres we’re in.

Will our LGBT+ mentors please stand up?

I was 25, in between jobs, and volunteering for a non-profit when I first met Brian Tenorio.

I knew of Brian, but it was the first time I had met him in person. It was during a mixer he had organized, one in a series of networking events that preceded his talk, “The State of Philippine Design”, in Greenbelt 3.

The mixers were thematic, and the one I attended was for the LGBT+ community. Brian chose Bed, the now-defunct club in Manila’s former nightlife epicenter Malate, as the venue. I wasn’t a party person, but I joined my fellow volunteers to network with people, intending to invite the ones we met there to an event we were organizing for our non-profit.

Brian had then just come back from New York, fresh out of Pratt Institute, where he took his master’s degree in design management. He was already known for his work in the footwear industry: a shoe designer and passionate advocate of the dying trade in his hometown, Marikina.

I didn’t realize how life-changing that meeting would be, altering the course of my life in so many ways. There wasn’t anything particular which stood out from our conversation that night, but I was on a high: I just talked to Brian Tenorio! Right after that event though, I posted on his Facebook timeline: “Thanks Brian for last night! I enjoyed making new friends.”

We would continue to talk, him teasing me about a guy I found cute in the mixer. Days after, we would have a call that would last until early morning, the two of us talking about our perspectives about the community, our beliefs, and growing up as gay people.

I found our dynamics—him, my senior; me, the wide-eyed, young gay boy—refreshing. The way he acknowledged and empathized to my experiences validated me in a way I didn’t know I craved so badly. My family couldn’t understand what I was going through. My parents dismissed me both for being young and being gay. Brian made me feel that my ideas, fears, and beliefs were not any less because of my age or identity.

There was a time when I messaged him one night in 2015: “It’s sad to be born in the wrong generation.”

“Who are born in the wrong generation?” he asked.

I explained: “A generation when people are more closeted. It’s hard.”

“Sometimes I think about that. Pero iniisip ko, when I think that way na, I think the concerns are just different. I wonder if younger people in the future will have easier times or just more different ones.”

A year after that chat, he would set up the Philippine LGBT Chamber of Commerce. Around that time I had just resigned as the administrative head of HIV advocacy organization The Red Whistle. It was a tumultuous exit: I had butted heads with the other directors. Despite what had happened, he continued to trust me and the decisions I’d made as the group’s former leader.

Later on, he would invite me to be one of the Chamber’s founding board members.

It was just what I needed at that time, when I was beginning to doubt my capacity to lead. Brian’s confidence in my abilities fueled the waning fire in me—a solid, steadfast confidence that I secretly thought was misplaced, with the impostor syndrome like icy water, making me question what I’d done to deserve a seat at the table.

Brian’s death last year, at the height of COVID, gutted me. I knew about the colon cancer—he told me about it just before he stepped down as the Chamber chair in 2019, but nothing could have prepared me for the wave of grief that would come.

“You don’t know how much you’re capable of,” his words would keep replaying over and over in my head. “You need to trust yourself more.” He had advocated for me when I didn’t, and when I couldn’t do it, for myself.

I think it is reductive and unfair to judge a person’s worth by what they’ve done for you, but with Brian having given so much to me, both personally and professionally, I valued him more in my life.

He went out of his way to not just be a teacher, but a confidant. I realize now how rare this experience is for our community. A few nights ago, I was talking to a friend about how we didn’t have a lot of LGBT+ people to look up to. There are other LGBT+ leaders, without doubt—but a lot of them—no, a lot of us—feel distant and untouchable, either too immersed in the work that we do or unable to find ways to connect with the younger crowd beyond the online spheres we’re in.

Sometimes I wonder if it’s also self-preservation for many of us. I was reading about how overthinking is a result of feeling psychologically unsafe, and with so many of us having survived difficult childhoods and a lifetime of oppression, the minority stress begins to take its toll.

It doesn’t help that the pandemic has made it harder to access neutral physical spaces where we can meet each other. Instead, we’ve settled for social media platforms that often seem like battlegrounds to outwit and out-sass each other. This was a poor substitute for genuine conversations where we could challenge each other’s opinions without getting cancelled at the slightest thoughtcrime.

We sorely need queer mentors like Brian. It saddens me to imagine that young LGBT+ people are missing out by not meeting older people from the community who can guide them and listen to them. (And no, I don’t mean meeting them in highly-sexualized spaces like Grindr, Tinder, Bumble, or Blued, despite how these spaces can also broker platonic connections.) We need out LGBT+ people who have shattered the lavender ceiling to show younger people that it could be done, and how they could make it happen without denying their SOGIE.

In that sense, LGBT+ organizations and employee resource groups offer a way for people from different generations, backgrounds, to connect. But as what we at the Chamber discovered with our research, the Philippine Corporate SOGIE Diversity & Inclusiveness Index, many companies in the Philippines have yet to include LGBT+ people.

Now more than ever, we need more mentors to pass the torch, so the young ones could finally set fire all the institutions of bigotry, discrimination, and exclusion that must burn.