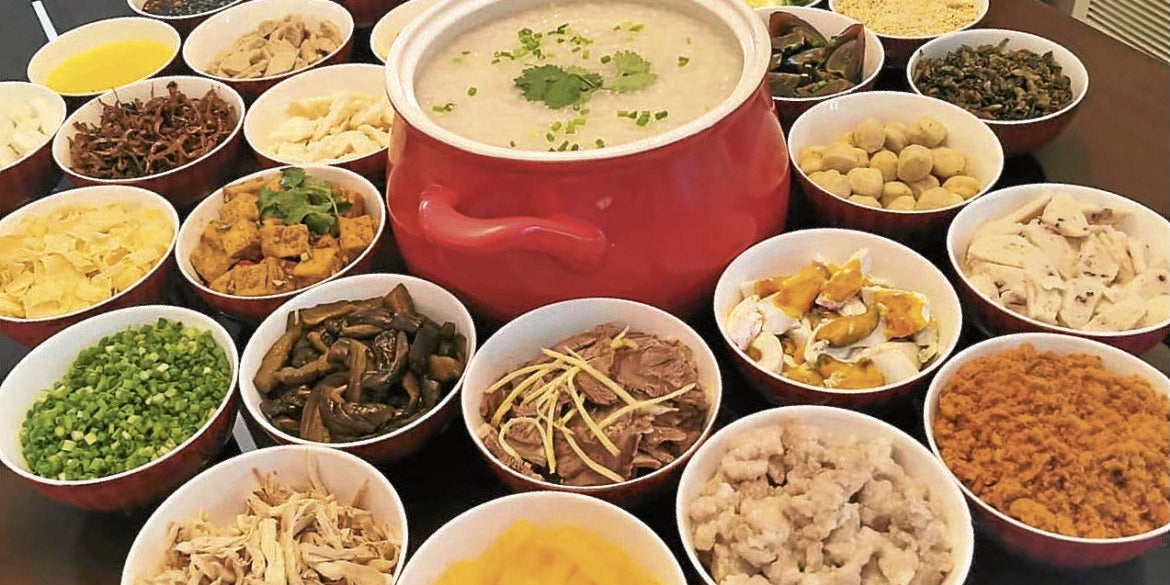 Here are my top rice porridge picks, in no particular order.

Superior Crab Porridge by Sergeant Alimango is made special with mud crabs from the owner’s farm in Bulacan. A recipe of their Chinese chef, the thick porridge takes its flavor from crabs, dried scallops and mushrooms. It is generously garnished with century eggs and onion leeks. (@sergeantalimango on social media)

TuanTuan’s Congee is made by cooking rice for hours, till it blooms and disintegrates into the liquid. It’s the slow cooking process that creates that distinct Hong Kong-style congee hue with a silky-smooth consistency. Other ingredients are added and left in the porridge to cook and to further infuse flavors. Of the many variants, I particularly love the pork with century egg. TuanTuan is where Hong Kong congee is showcased in all its gustatory versatility. (@tuantuanmanila on social media)

Goto King’s Goto Pares is rice porridge with beef stewed in soy, star anise, ginger, cinnamon bark, bay leaves, black pepper. It is then capped generously with chicharon, for texture. You may also opt for goto with slow-simmered tendon in sweet soy sauce and spices or Goto Halo with chicharon bulaklak and innards. (Tel. 0923-7478305; @gotoking on social media)

Lugawan Republic’s Pilugaw is a unique and very tasty rendition. Malagkit rice is simmered with chicken, black mushrooms and tripe. Sotanghon is then added to it. It’s topped with quail eggs, lots of toasted garlic and spring onions. The sauteed hibe, served on the side, adds a totally different dimension to it. (Tel. 0917-4907316; @lugawanrepublic on social media)

Goto Tendon takes pride in their porridge that is made with beef bone broth that’s been simmered for eight hours; the entire cooking process takes 12 hours. The rice gruel is decked with imported US beef tendon, tripe and quail eggs with a side of chicharon bits. (@gototendon on social media)

Gotong Marikina by Kusina ni Kambal is the most traditional take on the dish on my list. The slow cooking starts by sauteing minced garlic, onions, crushed ginger, kasubha, rice, seasoned with patis. Beef brisket broth is then added. An abundance of spring onions and toasted garlic, added last, enhances the goto. Gotong Marikina is best paired with their tokwa’t lechon kawali. (Tel.  0918-9022957; @kusinanikambal on social media)

Khao Tom Goong from Thai Chef Tum’s Kitchen is a Thai rice breakfast soup/rice porridge with shrimps. Thick rice porridge is served with soup on the side, that is poured into the rice just before serving. Condiments include cilantro, spring onions, fried garlic and vinegar with chilies. There’s an option for chicken or fish instead of shrimps. (Tel. 0906-2210370)Lily Lab’s Juk by Korean chef Lily Min for wellness. Heukimjajuk (black sesame seed and rice porridge) is a juk (porridge) made of ground black sesame seeds and rice. It is rich in amino acids, calcium, iron, vitamins and minerals. It is served with a dash of salt or sweet, with sugar.

On nokdujuk or mung bean porridge: In Korea since ancient times, according to Lily, mung bean has been called “a natural antidote that heals 100 poisons.”

Mung bean is said to lower body temperature, help digestion and promote detoxification by releasing toxic substances from the body. Lily recommends mung bean porridge for summer. The taste of these juk may need some getting used to.