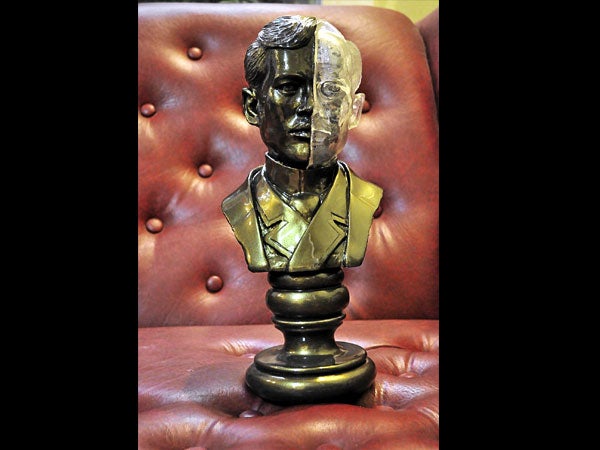 “He was good-looking, he was young, but more than that, he died for his ideals, so he automatically becomes an icon.”

The above was said of “Guerrillero Heroico,” the famous image of Che Guevara – perhaps the most-reproduced image in the world – but it could just as well have been said of Philippine national hero Jose Rizal.

Almost from the moment of his death, Rizal’s image became a potent symbol of the hopes, dreams and aspirations of an entire nation.

But icons exist in the realm of the imagination, independent of their historic roots. And just as Che’s face has evolved from a symbol of revolution to a brand marketing everything from sneakers to the ubiquitous T-shirt, so too has Rizal’s image become a pop icon, appropriated by each generation of Filipinos for their own specific needs.

Not only are today’s media-saturated young seeing Rizal “without the overcoat” (to quote the title of historian Ambeth Ocampo’s book of essays on the hero), they’re imagining him in jeans and Ray-Bans, and more.

Case in point: “Rizalborg,” a limited-edition designer toy based on the once-ubiquitous bust of Jose Rizal, which reimagines the hero as a cybernetic organism, a la Terminator.

While Rizalborg might leave more conservative Rizalistas aghast, more forward-thinking Filipinos seem to be hip to the irony. It is among the artworks represented in “RIZALizing the Future,” an exhibit of the more “pop” side of Rizaliana ongoing at the Yuchengco Museum to mark Rizal’s 150th birth anniversary today.

“Rizalborg/Cyborg Rizal is my interpretation of ‘Upgrade,’” says JP Cuison, the pop artist who created it. “I want to promote self-reinvention of Filipinos to become the best and avoid mediocrity,” he adds. “And I really hope the young who will encounter my figure will jumpstart their interest to know Rizal and our history.”

Perhaps best known for his hand-screened rock posters which incorporate images from popular culture such as cartoon characters, Cuison has also appropriated images from Philippine history, most notably the visage of the national hero.

“I consider Rizal as a pop icon,” he says. “He is a great influence. He also had his rebellious ways, which is similar to Pop Art. As a pop artist, I should pay tribute to an incredible man.”

A Fine Arts graduate of the University of the Philippines, Cuison works as a senior art director in an advertising agency and has twice been Philippine representative to the Cannes Young Lions International Advertising Festival.

His personal work, however, is informed by the Pop Art movement, and he acknowledges the heavy influence of Andy Warhol as well as illustrators Ed Roth, Jack Kirby and Frank Kozik. Last year, Cuison mounted his first solo exhibition at the Pablo Gallery in Cubao X called “Gigzilla,” a collection of his rock posters.

A second one-man exhibit, “Popzilla,” was held last month at the Secret Fresh Gallery in San Juan. Among the works exhibited were several featuring Cuison’s pop art take on historical themes, including Rizal.

“What was shocking then with pop art when it first came out was the brashness of its process and the randomness with which it selects its subject matter, not caring for the divine attributes of what a work of art is thought to possess then,” reads the exhibit’s program notes.

“What just pops out in the mind and to directly translate it into canvas is as automatic and as intuitive too of the very process of creating. The brashness transgresses into cannibalizing existing imagery to turn into something new, mediated anew, or repackaged anew to offer a different perspective of things which JP Cuison’ s POPZILLA is trying to convey, and wishes to jolt us out of our preconceived notions of things pop and otherwise…”

“The conflation of Rizal and Marilyn, mutated into one iconic persona, and reproduced as silk screen prints as a direct homage to Warhol, best illustrates this and more as being both martyred by history and propaganda, that turned into ubiquitous symbols that have digressed into mundane cultural objects, or at the extreme, kitsch, yet inflationary to their mythic currency.”

Transgressive as Cuison’s mash-ups might be, they can also serve as starting points for the viewer’s own reflections on Rizal and what he might mean to contemporary Filipinos embarking on their own journeys of self-discovery.

Besides, no matter how reinvented, reimagined or repurposed Rizal’s image might get, certain elements remain impervious to irony.

As Jonathan Green, director of the University of California Museum of Photography, said about Che’s image:

“This is a guerrilla show. Embedded in the pop iconography is the essential meaning of the image, which is about rebellion and anti-establishment struggle. So it comes in as a Trojan horse and radiates out in different ways… [Che’s] image has worked its way into languages around the world. It has become an alpha-numeric symbol, a hieroglyph, an instant symbol. It mysteriously reappears whenever there’s a conflict. There isn’t anything else in history that serves in this way.”

Similarly, embedded in Rizal’s image is a coded message to all Filipinos: be the best you can be, think globally but act locally, to thine own self be true, ang hindi magmahal sa sariling wika…

Rizal might even approve of the current hipster interest in his life and death. After all, didn’t he write, in “To The Filipino Youth”:

“And unbind, Youth, the heavy chain that fetters your poetic genius.” •