'The Conjuring: The Devil Made Me Do It' Review: Patrick Wilson and Vera Farmiga Return as the Ward and June Cleaver of the Dark Side | Lifestyle.INQ ❮ ❯ 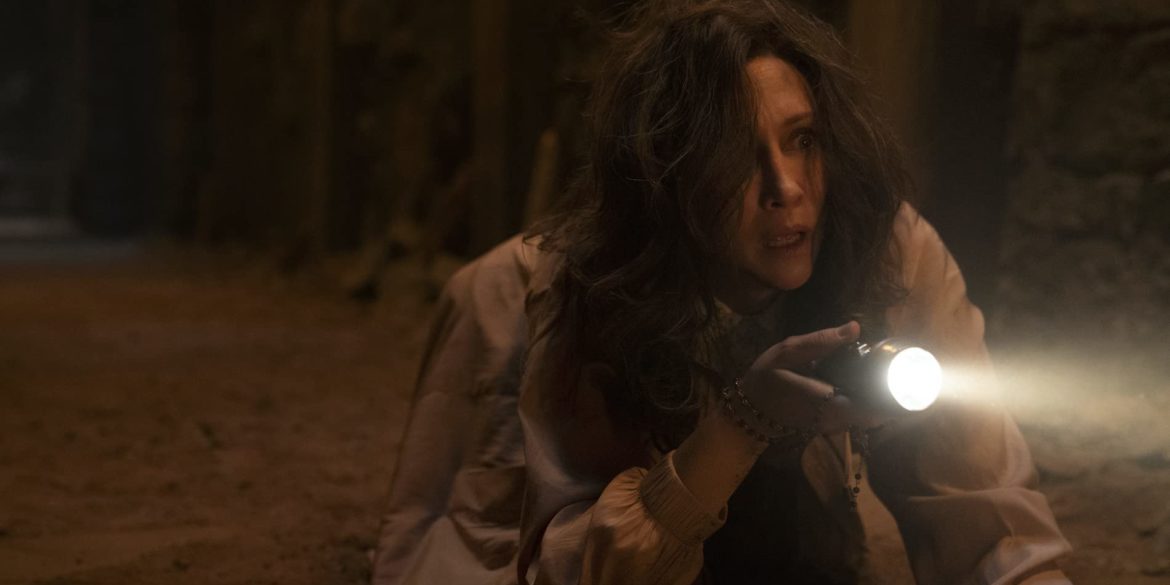 ‘The Conjuring: The Devil Made Me Do It’ Review: Patrick Wilson and Vera Farmiga Return as the Ward and June Cleaver of the Dark Side

LOS ANGELES (Variety.com) – Years ago, I learned that certain people will grow mortally offended if you call a character in a movie a zombie who is not, in fact (according to the supreme checklist of zombie traits), a zombie.

It makes you wonder if there are other supernatural micromanagers out there who keep tabs on whether a given character is or is not a ghost, a demon, a devil, or an evil clown. These legendary figments of fear do have definitions, of course. Yet they can mash together in your head — at least, if you see enough horror films since the movies themselves tend to blur them. That creepy face that appeared in the bathroom mirror, accompanied by a gong! on the soundtrack: ghost or demon? Decades of shlock psychedelic mainstream horror have eroded these distinctions, though in “The Conjuring: The Devil Made Me Do It,” the definitions do seem to matter, at least to Ed and Lorraine Warren (Patrick Wilson and Vera Farmiga), the Ward and June Cleaver of the dark side.

It’s 1981, and the Warrens are taking part in an exorcism intended to purge the body and soul of David (Julian Hilliard), a mild bespectacled 8-year-old boy. They’ve been through this before. The first “Conjuring” film was set in 1971, the second in 1977, and though this is technically the seventh film in the “Conjuring” universe (which now includes three “Annabelle” movies and “The Nun”), it’s the third to center directly on the Warrens, the real-life Christian paranormal investigators who were instrumental, in the ’60s and ’70s, in lending the spooky legends of the Amityville era their aura of tabloid credibility.

In “The Devil Made Me Do It,” the Warrens are now veterans of the haunting scene and getting on a bit. At the climax of the exorcism, when Lorraine asks a traumatized Ed if he’s feeling all right, and he says, “I just can’t remember one quite like this,” we know something’s up. The scene presents a case of possession, but it seems as if this devil is not exactly…a devil.

He talks in a devil voice, he causes the boy to contort his limbs the way Linda Blair’s did in the famous spider-walk outtake from “The Exorcist,” and it’s clear that he’s got mayhem on his mind. But when Arne (Ruairi O’Connor), the boyfriend of David’s sister, stares into David’s face and dares the demonic spirit to leap out of the boy’s body and into his own, the spirit complies. And according to the Warrens, who are the world experts in the subject, the devil doesn’t just do that. It’s not his style. Some other sinister handiwork is afoot.

This detail is supposed to matter because the hook of the “Conjuring” films is that they’re based on the “true case files” of the Warrens, whose career encompassed over 4,000 cases. Arne, who looks like a stricken Ashton Kutcher, now has that spirit inside him.

He and Debbie (Sarah Catherine Hook), who are about to get engaged, are hanging with their landlord, who turns up the volume on his late-’70s stereo, until Arne stabs him 22 times. He is arrested and put on trial, in what seems to be a clear-cut case of murderous madness. But the Warrens were there at the exorcism, and Ed saw what happened; he saw the body-hopping exchange. As Arne stands up in court, the Warrens are ready to help him prepare a case in which he’ll say, “The devil made me do it.”

This trial actually took place, in the small town of Brookfield, Conn., and the Warrens were involved; it’s part of their legend. (Spoiler alert: The Satan defense strategy didn’t work.) “The Devil Made Me Do It,” shot in gloomy dark brown tones, isn’t a screw-tightening assemblage of bump-in-the-night black magic, like “The Conjuring” or “The Conjuring 2.” Both those film were directed by James Wan, and they were paranormal pulp tricked up with a skilled bravura that could make you hold your breath in anxiety.

The new film, directed by Michael Chaves, lacks that kinetic haunted-house element. It’s the most somber and meditative and least aggressive of the “Conjuring” films. It’s out to deepen the series’ portrait of the Warrens, and damned if Patrick Wilson, with his gentle tenacity and Pat Boone grin, and Vera Farmiga, who plays Lorraine the psychic in high Victorian collars and embodies her gift with a feverish purity, don’t succeed in making Ed and Lorraine the coziest fighters of evil the movies have ever seen. Ed suffers a heart attack during that first exorcism and spends the rest of the film popping medication, but what’s really causing him heartache is that he and Lorraine can’t seem to agree on the nature of the force they’re fighting. It’s the closest they’ve come to a marital tiff. The two actors are so likable that you want to give them some milk and cookies and watch them curl up in bed with the Book of the Dead.

In a farm cellar overrun with rats, Lorraine discovers an occult totem that looks like something you’d buy in the Blair Witch Souvenir Boutique. It’s been placed there — not by a devil, but by a human. Someone is putting a hex on people! But who? “The Devil Made Me Do It” is less scary than its predecessors, but what I found unintentionally funny is that as the identity of the perpetrator comes to the fore, the culprit is showcased exactly as if she were…another demon! Annabelle, the Nun, the devil, the face in the mirror.