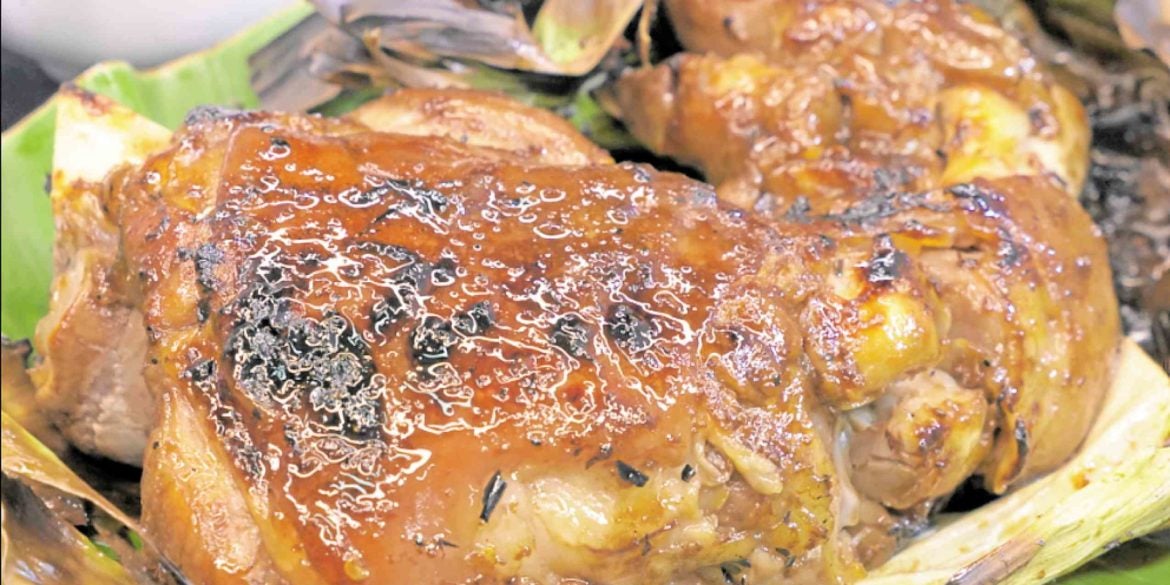 ‘Lechon patang tinupig’ from ‘the man crispy pata made’

Plus, my rendition of Sinigang sa Pakwan with Kimchi

A friendship I treasure is one I share with Rod Ongpauco of the famed clan behind Barrio Fiesta, Bakahan at Manukan, Singing Cooks & Waiters atbp. and Isdaan Family Restaurant. Rod is the man who concocted one of our country’s iconic dishes, the crispy pata, and calls himself “the man crispy pata made.”

Crispy pata was born during a stroll in La Loma, where Rod saw a pile of pig’s legs. With P12, “I bought the pata, seasoned them and sold them to my mom.” (That’s the famous Mama Chit Evangelista of Barrio Fiesta.)

Many years later, he has not stopped concocting. Interestingly, he doesn’t cook, but has the gift for whipping up flavors in his head, instinctively knowing what seasonings to put to enhance how a dish will taste in the end.

He told me how a recipe, like the Lechon Tinupig na Pata, a bestseller at his Isdaan Restaurants, is conceived. “I will call a cook and say, ‘We will make Lechon Patang Tinupig. Do this . . . ” and on he goes, in this case, instructing the cook to boil one whole pata for 4-5 hours in water, enough to submerge the hock. Add 350 g coconut milk, 1 whole peeled garlic, 2 pc siling labuyo, ½ tsp vetsin and 1 pork cube. Cook until pata is soft.

Wrap the pork in banana leaves. Roast it over coals until you hear the leaves pop, and it appears burnt and roasted. Serve with lechon sauce and achara.

Something to look forward to is his book, a memoir of sorts but so much more.

It is a compilation of all the lessons he learned through the years as a restaurateur. It will include chapters on how to wisely construct and manage a restaurant; tips for customers to get the best out of their restaurant experience; how to manage complaints; and how customers are not necessarily always right (where he humorously chronicles some of his most outrageous customer experiences).

The book will feature as well heirloom recipes along with his own masterpieces, like the Lechon Patang Tinupig.

Having been privy to portions of it, I can say, expect a book written with so much honesty, making it an ideal resource book for all restaurateurs, a practical manual for hotel and restaurant management students, and a piece of Philippine food history for all.

In praise of kimchi

There is no better way to promote and share cultures than through food.

“Chikahansik” is a one-stop digital talk and cooking series that takes you on a delightful K-food adventure, produced by the Korean Cultural Center (KCC).

For June, kimchi takes center stage. Did you know that there are over 200 kinds of kimchi, and countless dishes in which they are used as an ingredient?

Join me tomorrow at 5 p.m. on KCC’s YouTube channel

(@kccphil) as I teach Korean Embassy Consul General Lee Kyoo-ho how to cook my rendition of Sinigang sa Pakwan with Kimchi.

I am thrilled by how well received the dish was by those who have tried it!

Consul Lee, KCC director Im Young-a and public relations officer Jang Seon-ji were all in agreement when they said it tasted like a refreshingly fruity kimchi jjigae, and I agree. I personally love how the watermelon gives the dish another dimension with its mellow notes, rather than just the strong and tangy notes from both the kimchi and the tamarind. The gentle sweetness the fruit brings for the finish makes it even more delightful. Here’s the recipe.

adjust quantity according to taste

Spinach or pakoBring water to a boil and add meat. Boil for 15 minutes. Throw water.

Bring fresh batch to a boil and add onions, garlic, ginger chilies, watermelon (leave a few balls to add at the end), peppercorns, 1 tsp sea salt, 2 Tbsp fish sauce and kimchi. Bring to a boil and simmer until meat is tender. Season to taste.

Stay tuned to the KCC YouTube channel all Fridays of June to learn how Kimchi Fried Rice, Kimchi Pancake and Budae Jjigae (Army Stew with Kimchi) are made.

I was overjoyed to receive a box of Masflex mini cookware. When the “in” thing is buying frozen food in small portions to reheat and serve, the mini casserole pot makes the task so easy.

Frying small quantities of tapa, longganisa and egg can be done with ease, without the fuss of having to wash larger cookware. Dining for two has never been cuter or easier.

The nonstick 14-cm pan and casserole pot are light, heat up easily, yet are thick enough not to let food burn quickly. They can be used on gas, halogen, electric and ceramic cook tops. INQ