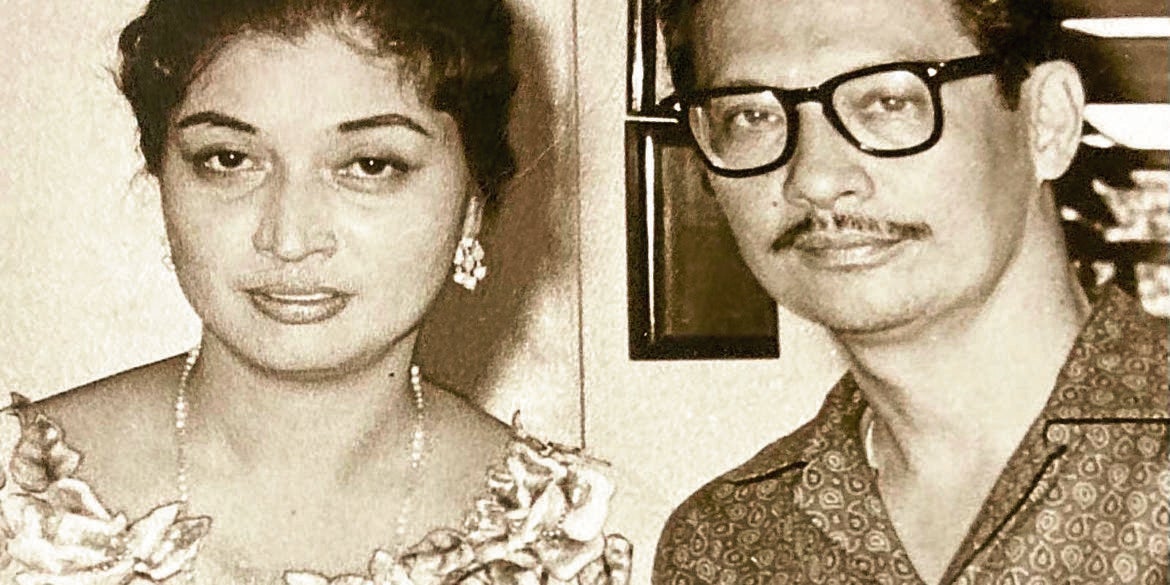 The author’s dad, Joaquin “Titong” Roces, as a young congressman, with wife Lita

He provoked me to think and aspire, nay, do my part, no matter how small, for a better world

“If I ever write a book about this country,” my dad, Titong, told me, not just once in his long life, “I’d rename it ‘Sayang’—for all our missed chances.”

The last time he said it, he still clung to some hope—until we elected an Erap president. “How could you let that happen?” he told me.

Little did he know Erap would be penny ante compared with the regime that would take his over after he was people-powered out of office. It was in fact his successor, Gloria Macapagal-Arroyo, who actually began the pivot to China, which was halted, though only temporarily, it would turn out, when money scandals surrounding it were exposed.

By then Dad had descended into early dementia and became confused, thinking he was back in his clearer-headed time, in the presidency of Arroyo’s father, Diosdado Macapagal. He couldn’t understand how Macapagal beat Carlos P. Garcia.

To Dad, Garcia was the best president of his time, chiefly for his Filipino First program, which gave the nation the first basic industries owned and run by Filipinos. Macapagal derailed it with his “decontrol,” which he disguised as a free market idea, as such fair across the board, but it only put back in favor the foreign profit makers.

Garcia did not enrich himself or form a dynasty, as was, and continues to be, the political fashion. In fact, the family is said to have gone through hard times after his death, in 1971.

Dad felt Garcia had not been properly appreciated. The reason, as shallow—mababaw—as any, he said, might have been his dark skin. He added that such shallowness in fact showed in every facet of our politics, most clearly in our choice of leaders, and was itself reflected in our values and priorities as a nation.

It bothers me because I tend to agree. Our tolerance for abuse of power and corruption is simply incredible. Dad himself was convinced, given the chance to benefit from it, the Filipino could justify it to himself.

Dad died in April 2010, a month before PNoy’s electoral victory. PNoy would have done him proud, but I’m glad Dad was spared the Duterte regime, and the ultimate deterioration of the Lower House, where he served as a five-termer representing the business district of Manila. “In my time, the provinces sent their best and smartest to Congress. They may not have been saintly, but they were their districts’ most promising.”

Dad was in his early 30s—among the House’s young Turks, as they say—when he entered politics, in 1953. It was the time when the possibilities for the Philippines were limitless. We were way ahead of our neighboring nations, in education, not to mention taste and sophistication. Our press was the freest. It was indeed a good time for me to be young and alive, and for Dad to be in politics.

Dad ran for Congress against his parent’s wishes. He was a lawyer, and he believed that only as member of the legislature could make a real difference in the lives of ordinary people. His career would have gone on for 20 years, had martial law not killed it.

He was most concerned about the rising poverty. He liked driving around his district, observing, and he noted the widening gap between rich and poor. “Here, it is a crime just to be poor,” he often told me.

He’d point out the sidewalk vendors, “They are breaking the law. But they can’t afford to get a permit and issue receipts, probably selling stolen or smuggled goods, too. Cheaper to bribe the cops, and that becomes a way of life, a culture among the poor. Sad, but in this country, in order to survive, many times the poor have to break the law.”

He also enjoyed testing me. “I’m sure your heart bleeds for the poor, kiddo. But do you really want to eradicate poverty? Ask yourself—there’ll be no more maids, drivers, and others who make your life so easy.”

What I love and miss most about Dad was he provoked me to think and aspire, nay, do my part, no matter how small, for a better world. He introduced me to books and inspired my love of poetry. He loved classical piano music most, and would play along on an imaginary keyboard while listening, rivaling Victor Borge for laughs, as his hand would flip over to hit the far note with an upside-down thumb.

He expanded my area of responsibility to include things I thought none of my business and made me realize my connection to them. We would not always agree, but we always had a healthy exchange. Dad was not easy to understand, not that I didn’t try.

One of his most puzzling statements to end a disagreement was, “Sure, you may be right. But how do you feel about it? Are you happy? It’s better to be happy than right, kiddo!”

But he had his inimitable and indisputable ways to show he cared, by always being there when I needed him. The trouble with him was, his heart was so huge it could accommodate more than the allowed usual, as my poor mother found out.

The late Gilda Cordero-Fernando, a mentor and confidante of mine, who knew Dad’s younger brothers, was quite fascinated by him. She thought him “a lovable scoundrel.”

I noticed how much she enjoyed my anecdotes about him, which reminded me of Dad’s comment as he emerged from his first confession after nearly a lifetime too quickly—based on my own calculation, and having a good idea of how long the list of sins he needed to unburden himself of. I half-ran to meet him, “Finished na? Are you sure?”

He had that naughty twinkle in his eye, “I had to stop. My confessor was enjoying himself too much.”

He never took anything seriously—life, aging, death. Was he wrong? Oh, but he was happy! That’s my dad. INQ