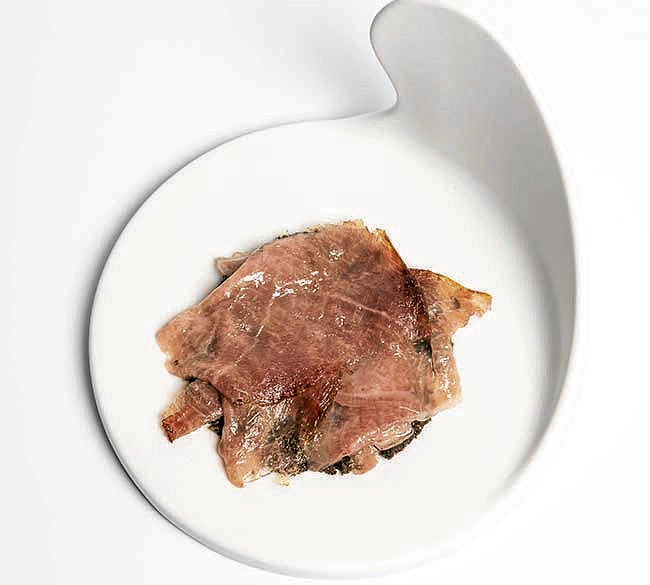 Tuna ham by Angel Leon and his team —PHOTOS FROM FOODSANDWINESFROMSPAIN.COM

The last time I went to Spain was 2017 for Madrid Fusion, the annual gastronomic meet that features the innovations of Spanish chefs and presentations of other international chefs of their own creations.

It was also the last time that Madrid Fusion Manila was held. For three years, beginning 2015, the Philippines was the focus of the food world as premier chefs from all over the world came to give talks on their own innovations.

During the pandemic, and even if Spain lost many lives due to COVID, Madrid Fusion 2020 seemed to still draw the crowds, with attendees naturally wearing face masks.

For us who experienced both Madrid Fusion in Spain and in Manila, that meant some hope that things would get back to normal—a continuation of perhaps the best congregation of chefs, food writers and researchers.

So much information during Madrid Fusion 2021 was summarized in a report by the Foods and Wines from Spain website (foodsandwinesfromspain.com). They again provided the “aha” factor that the food meet always elicits. And they need not be radical, like Ferran Adria’s innovations of some time ago.

For instance, Mario Sandoval of the restaurant Coque made an emulsion of tuna spine marrow using a dashi confit made from the eye of a bluefin tuna. It was a Hollandaise-like sauce from a nontraditional base that blends the cooking of two nations.

Three chefs (Eduard Xatruch, Oriol Castro and Mateu Casañas) decided to experiment on a new way with salt-covered baked fish by using sugar-covered mango instead. The outcome produced what looked like volcanic rocks, and which they called Mango Volcano.

Angel Leon of the restaurant Aponiente is known for experimenting with seafood. This time, he was able to make honey out of a plant that grows near the marshes of Trebujena in Cadiz. The process wasn’t detailed, but it involved drying the plant for two weeks, then breaking and crushing before passing it through a water rinse. Its taste is described as sweet as honey but a bit salty, no doubt from the seawater it came from.

Leon also shared his research on a marine grain called Zostera that is similar to rice.

But Madrid Fusion 2021 reported that what stole the show was the ham that Leon and his team made from tuna, using the same method to produce ham from pigs.

It was the three Roca brothers of El Celler de Can Roca (two were guests at Madrid Fusion Manila 2017) who showed what one can do with food that can be considered a waste product. Their presentation was on the use of pepper leaves. (We could have told them, if we were there, that Filipino cooking does use dahon ng sili).

Anyway, they ferment and toast pepper leaves to make a pepper tea. They had their own tea ceremony serving with the beverage padron pepper that was freeze-dried then stuffed with what looked like the pepper seeds, but were really Manzanilla olive pears, then a cod brandade (salted cod with potatoes) served with picked pepper flowers and a sauce of pepper juice.

Perhaps the most intriguing innovation was made by Joan Roca, who was asked to cook for the heads of state at the 2019 United Nations Climate Change Conference in Madrid.

Roca had to do a menu that was “environmentally sustainable, socially just and economically inclusive”—the buzzwords for chefs today to keep in mind while cooking.

But Roca has proven time and again that ideas can be put in the cooking.

Imagine a surf-and-turf dish with no meat or seafood, but just edible plankton. Roca said it was important to have the color necessary for the dish, the stalks to give it body and a dressing from olive oil, sunflower seeds and juice from different herbs.

In one of the dishes, Roca said he highlighted Spanish legumes—chickpeas, lentils and beans—that provided a base for a vegetable ceviche, then a romesco sauce made of nuts, topped with shavings of turnip and cucumber with flowers, sprouts and some stalks.

No animal protein is used, only root crops and vegetables so as to “give a feeling . . . of eating meat.” These included roasted beets that were aged, grilled watermelon, tomatoes, purple onions, peppers and purple carrots that were candied, all looking like meat because of the color.

We can hardly wait for Madrid Fusion 2022 and the innovations they will bring.