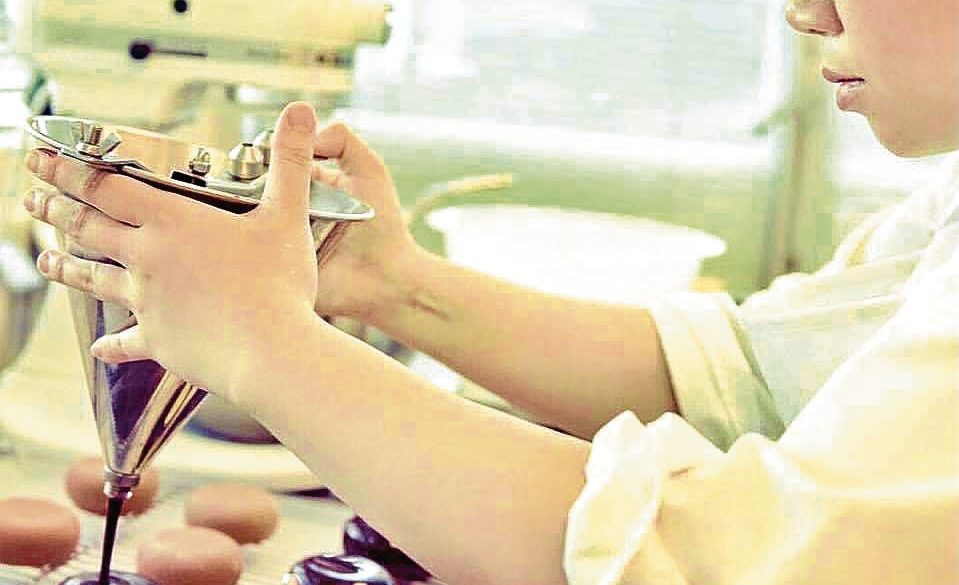 Kaye Bello at the C3 International Chocolate Chef Competition in France in 2015, where she represented the European zone

UK-trained Kaye Bello returns to Kabankalan for good to launch her own world-class dessert brand, Kalamay

She was only 10 when she moved to the United Kingdom, but Kaye Bello managed to keep alive her love for the Philippines in general, and for her hometown in Negros Occidental in particular. During Easter and school breaks, she would fly back to Kabankalan, a first-class city that straddles Negros Occidental and Negros Oriental.

“That’s why I can speak perfect Ilonggo and Tagalog although I’ve spent most of my life in the UK,” Bello told Lifestyle in a phone interview.

The professionally-trained pastry chef, 30, has worked in several Michelin-star restaurants as well as in establishments recognized as some of the best in the world.

She started her career as part of the opening team at the Waldorf Astoria Hotel, where she was trained by the former head pastry chef of the defunct La Tante Claire, a restaurant in Chelsea in London with three Michelin stars. She then interned with William Curley—“one of the world’s best chocolatiers”—where she learned about chocolate bonbons and boutique-style pastries.

Her resumé reads like a Who’s Who of the culinary world and includes stints at Gordon Ramsay’s Michelin-star restaurants, and The Fat Duck by Heston Blumenthal. At The Fat Duck, she was its resident chocolatier and was also in charge of the pastry prep room when she was stationed in that section.

Bello then traveled to Australia in 2015 to be the executive sous chef of a private resort in the middle of the Great Barrier Reef before returning to the UK to work at a two-Michelin-star restaurant in a five-star hotel located in the Oxford countryside.

Two months ago, she packed everything up—24 balikbayan boxes in total—and returned to Kabankalan for good. “Moving back was always part of my plan. I loved coming home when I was younger.”

She’s aware that people go to the UK to earn money but she wanted to come home to the Philippines because she didn’t want an “extravagant” life. At home in Kabankalan, there is a hectare of land behind her house that she plans to fill with fruit-bearing trees.

“I was always so amazed at the wide variety of fruits and produce available year-round. Easter holidays coincided with mango season when the fruits were at their peak and so sweet,” she said.

Her favorite fruit? The star apple or kaimito. “When I tried to describe the fruit to my colleagues, I likened it to mangosteen but they still couldn’t imagine what it looked or tasted like. Usually when they travel to Asia, they head to Thailand, which also has a wide variety of fruits, but I am partial to my country.”

A few weeks ago, Bello opened her own brand, Kalamay, where she sells cupcakes, macarons and a range of tiered “botanical” cakes that are beautifully iced and topped with realistic buttercream flowers. The cakes that are available in regular and diabetic variants come in flavors like Banoffee Coconut, Classic Victoria, Lemon and Calamansi, Sans Rival, Red Velvet, Chocolate Salted Caramel, Hazelnut Praline, and Carrot and Walnut.

She recently came up with a cake with Baguio strawberries and a filling made with local guavas. “I want to incorporate more Filipino fruits into my cakes, entremets, cupcakes and croissants.”

She relies on two mixers to help whip up her confections: a KitchenAid Artisan given by her father for Christmas eight years ago, and a Kenwood Titanium Chef XL 6.7 liter mixer.

“The one my dad gave was my first mixer that I still use and treasure to this day. I only use it for small things to keep it in pristine condition.”

Her “partner and workhorse” is the second mixer that she says makes work life extremely smooth and easy.

“It was my first investment from my home business back in the UK. It’s honestly the best thing I splurged my money on!”

Both mixers were carefully packed and sent over in one of the 24 balikbayan boxes. “For my competitions, I can’t go anywhere without my Bamix Pro-2 stick blender. I kept that in my suitcase because it’s a lot lighter for travels,” she said.

Bello said she decided to open in her hometown instead of in a big metropolitan city, although it was not for a lack of offers. She is optimistic that people will make the effort to come and visit her place even if it might require a water crossing.

“Before the pandemic, more and more Filipinos were traveling internationally. They’ve become more open to trying out new things.”

She’s having an oven customized which should be ready in the next few months. That’s when she will begin selling more pastries that can travel well and that customers can take with them to go or on the plane.

Bello is also passionate about fermentation and makes her own kombucha, miso and kimchi. She has begun selling kimchi. “I have a fermentation room at home. Now that more people are aware of maintaining gut health by ingesting fermented foods, I’m hopeful this passion of mine will also take off,” she said.

For the moment, she’s focusing on getting the word out that Kalamay, which sells pastries made with locally sourced ingredients using European-style techniques, is on soft opening.