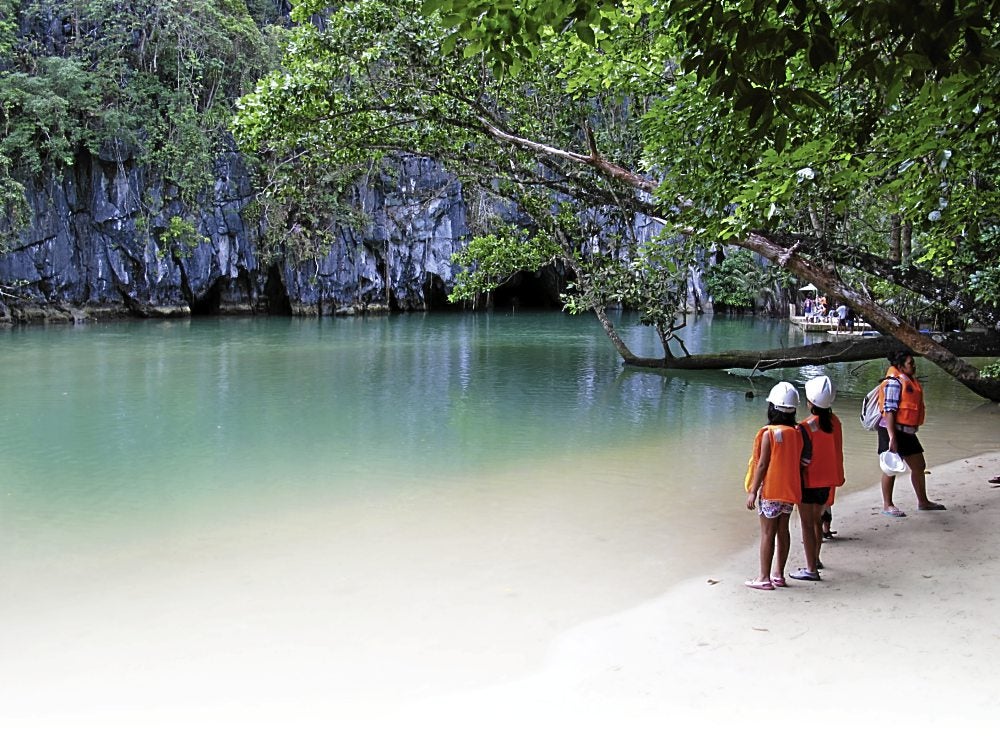 WEARING regulation life vests, visitors wait on the shore to board their banca to take them into the river grotto.

The tourism onslaught on Puerto Princesa is on.

Tourists are everywhere.  One out of every three vehicles on city streets is a van packed with tourists, crawling behind tricycles buzzing around like flies.

Although Puerto Princesa already buzzes with tourists these days, the city is still gearing up for an expected increase in arrivals.

Constructions of new tourist facilities are going on simultaneously all over the city that the dust has no time to settle.  Rapid change is everywhere; the city is aggressively in expansion mode.

Already evident are the traffic, urban congestion and visual chaos that follow the rush to build up a city known to be the greenest in the country.

Puerto Princesa nowadays has that boomtown feel.  The city is changing right before your eyes, and in a year or so it will be practically unrecognizable.

That is true:  Less than a decade since my last visit there, it was difficult for me to find the Puerto Princesa I remembered.

The Puerto Princesa I knew was a quiet city that had so much personality, a welcome and very unique identity distinguishing it from other Philippine cities.  Unlike in other congested cities across the country, in Puerto Princesa fully grown trees shaded its broad main avenues, a perfect green foil to the low-rise structures along the streets.

Those endangered avenues are harder to find now.  New development is homogenizing the look of the city, soon to look like all other newly developed areas in any other Philippine city where one-strip mall after another lines streets with no sidewalks and no trees.

Unless strict planning and zoning controls are instituted, the unique Puerto Princesa identity that sets it apart from any other place in the country and that makes the city a tourist attraction will be gone.

Aside from allowing maximum development to happen in a regulated manner to prevent overdevelopment, zoning and planning measures control traffic, pollution; and while allowing the city to grow, control measures maintain growth at sustainable levels.

Determining and maintaining sustainable levels to effectively manage tourism growth are essential to keep alive the goose that lays Puerto Princesa’s golden eggs.  The goal is to sustain rather than deplete tourism resources.

Puerto Princesa’s Subterranean River, the city’s  prime tourism resource, is already close to becoming a victim of its success.

The question is, How can the Subterranean River sustain the projected increase in visitor arrivals?

The number of visitors to the Subterranean River is strictly regulated through required bookings, and strict registration procedures document visitors before entry.

To avoid overloading, passenger numbers are strictly regulated in boats ferrying visitors from the pier to the mouth of the Subterranean River, and in the smaller boats to which visitors transfer to enter the river grotto.

Inside the Subterranean River, a constant train of boats goes in either direction.  At the present rate of visitation, it is evident that carrying capacity for the cave is close to maximum and that alternatives are needed if more arrivals are expected.

Another question needs answering here:  What is the human impact on the grotto?

Humans introduce lint that flies around, attaches to the cave walls, and impedes the natural formation of stalactites and stalagmites.  Think of how much lint an average of 45,000 humans who enter the cave per month can give off.  How do the rock formations combat lint?

These are just a few environmental-and-tourism management issues that should be answered through a comprehensive planning process that gives direction to the growth of Puerto Princesa while sustainably managing its tourism resources.

It being a site inscribed on the prestigious Unesco World Heritage List in 1999, a Management plan to protect and guide all impacts in the entire Puerto Princesa Subterranean River Park is what the city  is committed to.

Being inscribed on the World Heritage List requires managing and maintaining the natural equilibrium of the park, assuring its sustainability and its future, while allowing tourists and visitors to enjoy its natural beauty.

The tourist buzz is expected to bring more benefits to the Puerto Princesa community, and it should.

However, unless sustainability guides the tourist boom, in the end the benefits could turn out to be not only short-lived, but also harmful to the city’s tourism assets, providing only temporary relief for the community.

Tourism is normally double-edged:  beneficial when well-managed, and disastrous when tourism assets are exploited.

If not hatched sustainably, those golden eggs may turn out not be golden in the long run.