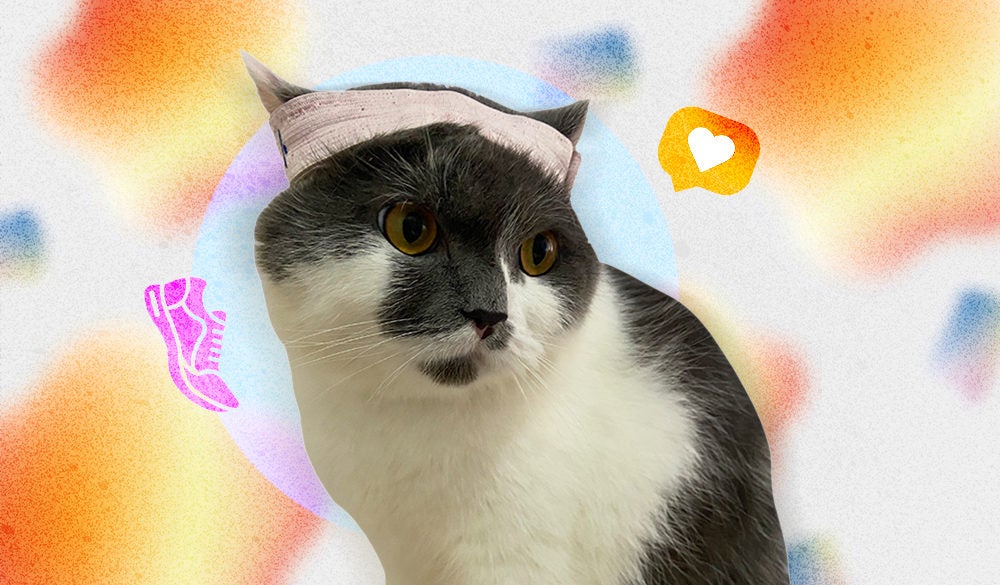 On last week’s episode of “Please Make My Cats Famous,” I turned my cat Onion into an alt TikTok baddie à la Rih. This week, Astro is once again taking over the mantle—and getting some exercise in.

Astro is very famously a big boi, my large son, a huge chonk, and an absolute unit. My friends jokingly ask me why I got a large cat when I’m so short. In truth, I had no idea Astro was going to get this big. Believe it or not, he’s half Munchkin. Him being as large as my torso is a surprise to me, too.

The boy is also around 12 pounds heavy. He’s twice the size of Onion. While our vet said that he’s not yet at an unhealthy weight level, he’s close to it, which is why it’s important to keep him moving.

Unfortunately, it’s a bit harder to get Astro active. He’s not interested in most toys. That’s why, before the pandemic started, we used to go on short walks together. (Harness-train your cats, folks.) However, we had to stop because I wasn’t going to risk my cat getting COVID-19 too.

Since fitness and exercise culture is a big part of the internet, especially on Instagram, I wanted to explore that with the big boy—and hopefully try to get him active (safely) again.

For this, I interviewed transformation coach and fitness influencer Ramona Julia Sucgang-Bonoan. A few years ago, she helped me fix my diet and nutrition (though I haven’t kept it up at all especially since the pandemic hit—sorry Julia!). She also has a ton of cats herself, which is why I thought she was perfect for this.

During our interview, I asked her about the shady side of the IG fitness world, where some people end up promoting harmful practices or mislead their followers. She told me that she doesn’t like calling out specific people and she works on becoming a better example instead. “I focus on myself. You have to be a good example [to counteract them]. You have to use your platform to inspire people.” It empowers her own followers.

She also told me that she doesn’t like calling anything good or bad, and doesn’t like demonizing meals. “Instead of saying that something is a bad diet, I say it’s a nutrition-deficit meal.”

Julia is a mental health advocate, too. She speaks up about it a lot and she’s very vocal about her own experience with depression. It’s pretty noteworthy considering that there’s still unfortunately a lot of people in the fitness world who are not as kind or aware when it comes to topics on mental health.

For Astro, Julia told me it would be really cute if I turned him into a Zumba instructor. “Cats look really cute when they look like they’re dancing,” she said. She suggested I put a headband on him and pretend that he’s leading an exercise class.

Before I started with that challenge though, I attempted to get my cat walking again. My building’s rooftop is quite scenic—it resembles a park a little bit—so a number of residents have started going there to go jogging and the like. I also knew that there was a gym near the area, too. I figured that if I went there, I could either get Astro on a treadmill or have him run alongside the plants on the rooftop. Both ideas turned out to be a bust—the gym was closed (and I think probably wouldn’t let my cat inside) and Astro ran *away* from everything. It was honestly kind of comical hearing people exclaim, “Uy, pusa,” while my cat ran away from them.

I also tried to walk him around the corridor. However, whenever he heard a door open, he would sprint as fast as he could toward it, dragging me along with him. It took all my strength to get him from entering a stranger’s unit and it left me feeling winded.

With those failed attempts out of the way, I started with Julia’s Zumba challenge. I don’t own an exercise headband, let alone one for cats, but I did have an old skirt with an elastic waist. So I cut it open and fashioned a headband out of it.

It turned out really cute on Astro, if I do say so myself, even if it kept slipping off.

The Zumba challenge itself, however, turned out to be the hardest challenge I had to do so far. First of all, Astro was extremely heavy, which meant I could carry him up with only one hand without my arm buckling over. This made it harder for me to remain off-screen. In our best take, I’m still in full view of the camera. And I had to maneuver all that while also trying to keep the headband on his head. Astro also kept kicking away my camera rig, which meant I had to redo it over and over again.

Despite the talent being difficult, we did end up with some cute photos and a nice li’l video. Still, a Zumba instructor, he is not.