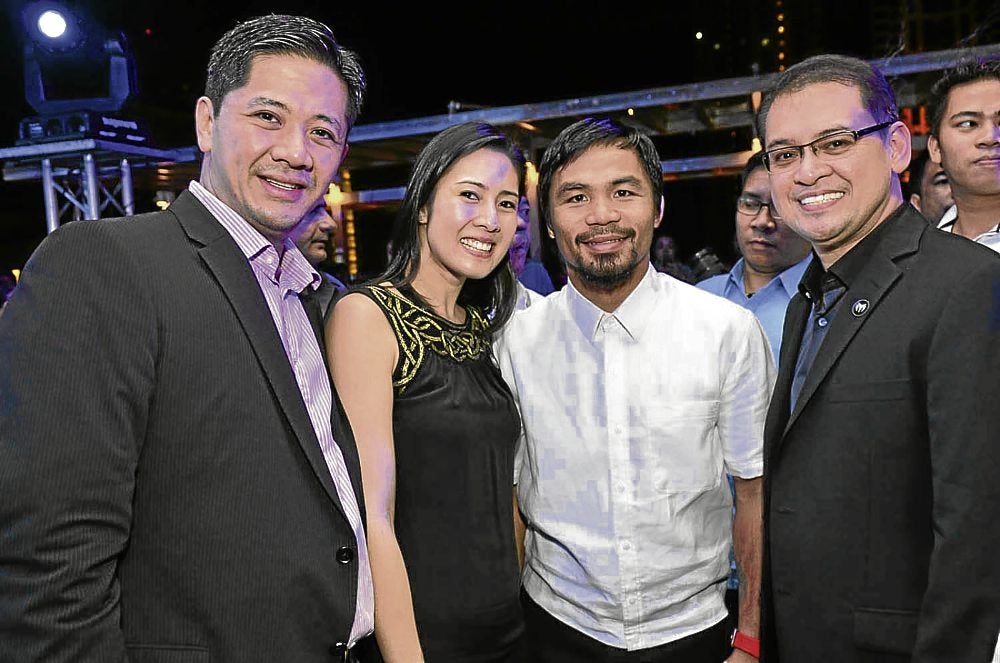 Nobody stops traffic like Manny Pacquiao does, dahlings. It was no exception when the world-renowned TechnoMarine launched its MP8 watch of limited-edition Manny Pacquiao watches, palanggas.

It was a star-studded affair. The popular Skye Lounge got on a roll when Gov. Chavit Singson breezed in, followed by the gorgeous Georgina Wilson and dashing Borgy Manotoc hosting the happening superbly.

All of the hotshots were blown off by the entrance of our global icon Pacquiao, naturellement. The boxing champ walked on the ramp showing off TechnoMarine’s latest MP8. The Swiss brand known for “its bold yet distinctive timepieces,” said the emcees.

Expressing pleasure in releasing the MP8 to the Philippines was Raffy Florencio, president of Techno Time Retailers Corp., the exclusive distributor of TechnoMarine in the Philippines.

“This timepiece is very limited with only 1,000 pieces that will be produced worldwide,” Raffy said, adding that “the sleek design is inspired by the boxing champ and his global achievements.”

Adding a stylish touch are two straps—red and white—that come with the watch. Limited-edition yellow and blue straps are sold separately to match every mood.

Once the frenzy was over, everyone partied. Five lucky guests who put their calling cards in the fishbowl won the MP8 watches. But for those who didn’t win, TechnoMarine offered a 30-percent discount, but for that night only. Moi noticed loads of moneyed guests grabbing the watch, dahlings.

The watch is now available in all TechnoMarine outlets nationwide.

The event got on a roll with the introduction of the company’s new general manager, the charming Dharmesh Goshalia, no less, dahlings.

“This year is another exciting year for Nokia,” Dharmesh said. “We’re looking forward to delivering aspirational products that offer choices for the consumers, with differentiation on quality and value for money.

“Nokia has a long relationship with Filipino consumers and enjoys a huge gap over competitors because of Nokia’s strong image as a trustworthy brand, always meeting customer needs and being easy to use.”

The best part, as always, was the sumptuous lunch. Later, there were fun games and a raffle, dahlings.

“This year is another milestone for Nokia as it makes premium apps available for purchase at the Nokia Store through Globe Telecom’s convenient automatic billing,” said Dharmesh. “Nokia users can now easily download paid personalized content, like apps, games, ringtones, productivity tools, movie trailers and more from the Nokia Store without the need of credit card or direct cash payments. We deliver compelling content to Globe Telecom customers with that simplified access and use.”

Check out the real cool deals, products and services. With a new captain onboard, Nokia will provide more to users this year, dahlings.

The place was eye-catchingly decorated with the landmarks of New York, including a backdrop of St. Patrick Cathedral on New York’s 5th Avenue, where they met and said their “I dos” 40 years ago, palanggas.

Some 300 invitees braved the rains and traffic to motor from Manille, but when they arrived in Tagaytay, the sun was shining and everything was bright. They watched Bob and Betsy walked down the aisle to the music of Bernie Pasamba, followed by their children and grandchildren. Many sentimental guests were teary-eyed.

Fr. Jerry Orbos, Msgr. Dan Sta. Maria and Fr. Herb Schneider led the thanksgiving mass “for the love that Bob and Betsy lived as one for 40 years.”

Later, there was a sit-down dinner with roast beef from Tender Bob’s, naturellement, as the piece-de-resistance, followed by a fun and touching video presented by the whole famille.

Après the slicing of the cake and toasting of the wine from their son’s Torontes and Guarda, there was partying as the MOBB band played and guests rocked on the dance floor, dahlings.