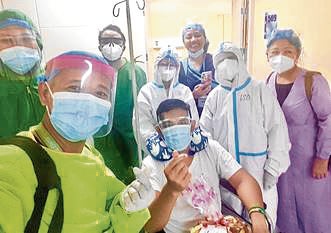 After a stormy hospital course, Greco Belgica (center, in wheelchair) is discharged and sent home. Shown here are his medical and nursing staff, including his mother, Dr. Meth (far right).

Physically fit at 43, the Presidential Anti-Corruption Commission chair thought licking COVID would be a walk in the park. He was wrong

When Presidential Anti-Corruption Commission (PACC) chair Greco Belgica had fever and body malaise four weeks ago, he hoped it was just an ordinary flu or, if it were COVID, that his healthy body could easily lick the virus.

After all, at 43, he was in tip-top shape and physically fit. He was a health and fitness buff, an athletic swimmer and a taekwondo martial artist.

He exercises four to five times a week. He basks under the sun every morning for more than 30 minutes, jogs on the treadmill for another 30 minutes, and lifts weights. He eats brown rice and vegetables most of the time and avoids sweets, junk food and drinks. He doesn’t smoke nor drink alcohol. He loves eating fruits in the morning and takes his supplements every day.

Licking COVID should be a walk in the park, or so he thought.

His mother, Dr. Carmelita “Meth” Belgica, gave him the standard supportive treatment regimen for COVID-19. He was isolated with wife, Nina, at home for the first week of his symptoms.

But apparently, the virus had mean plans. His fever spiked intermittently, with uncontrollable chills, temporarily relieved by antipyretics. His coughing went from bad to worse.

The symptoms worsened further and he started feeling short of breath. His oxygen saturation in the blood was starting to dip.

Nina and Dr. Meth convinced him to get admitted at a tertiary hospital near their place.

While being transported in the ambulance, a lot of thoughts swirled in his mind. But all of them were appeased by a deep sense of calm.

“I know the Lord was going to work out all things together for good for those who love Him and are called according to His purpose,” says Greco.

His attending physicians (APs), pulmonologist Dr. Sveth Maguslog and Dr. Elaine Balleser, immediately requested for laboratory tests, which showed he had bilateral pneumonia, and a markedly low level of his immune blood cells.

His indicators of inflammation or cell swelling in the body were all high, and his blood-clot indicator was elevated, suggesting that blood clots may be forming in his blood vessels.

From the start, he told Nina and Dr. Meth that he was not willing to be isolated in the intensive care unit or to be intubated and hooked to a respirator.

Remdesivir and the recommended or conventional protocol for severe COVID were promptly initiated.

He went through a physical, as well as mental, roller coaster in the next few days, with no significant improvement noted in his symptoms and overall condition. Nina recalls that period as a week of tears, prayers and worries.

She spent most of her free time praying. And as she was praying one time, she felt the Holy Spirit’s presence, which was like a soothing balm to her frayed nerves.

A friend told Nina to call a Filipina critical care nurse based in Texas, who has an excellent batting average with her COVID patients, mostly high-risk seniors in Florida.

Greco’s brother, Jeremiah, also called his doctor friends, to join the group, including myself, in a Zoom meeting to discuss Greco’s case.

Greco was then in the dreaded hyperinflammatory stage of COVID. He already had the telltale signs and symptoms of adult respiratory distress syndrome (ARDS), which is like the Rubicon of many COVID patients, wherein turning back may no longer be possible, except for some blessed ones.

She told them that she is convinced the treatment regimen, though unorthodox, could help him improve and recover. She pleaded with them to give the regimen a try; and they obliged.

After 24 hours, there was not much improvement, and his oxygen level was precariously hanging in the critical zone, which indicated the need for intubation and assistance with a mechanical ventilator. But Greco remained mentally sharp and maintained his decision that he should not be intubated and isolated.

The group agreed that Greco’s condition, based on his serial arterial blood gases, was heading ominously toward severe to critical, and since intubation with mechanical ventilation was not an option, we had to make some bold moves with a now-or-never urgency.

It was clear that severe inflammation, no longer the virus itself, was the main problem at that point; and so, we decided to be aggressive with drugs that could help neutralize the inflammation.

We decided to give leronlimab, a new repurposed drug that has to be imported abroad. Ivermectin was increased to its maximum recommended dose in severe COVID; melatonin was likewise increased to the maximum dose of 600 milligrams in four divided doses (usual dose as a sleep aid is 1-3 mg); vitamin C was given at 100-gram infusions per day, and his intravenous steroid dose was also doubled.

Special-duty nurses were called in to assist at bedside so he could be closely monitored and his medicines given on time. COVID with moderate to severe ARDS requires precision medicine, as a small misstep can spell the difference between surviving and dying.

The next 48 hours seemed like eternity. Nina was scared every time her phone rang. We gave Greco megadoses of all possible drugs that could help; but we believe that the real megablessing came from God.

The COVID clouds hovering around him started to clear.

Four days later, his oxygen level remarkably improved but still in hypoxemic range. He dressed up, propped himself up in front of his laptop and tablet, and led his staff at the PACC and other partner agencies in the virtual launch of the National Anti-Corruption Coordinating Council.

His special nurse was subtly monitoring his oxygen saturation levels, and he was mildly hypoxemic the entire time he was leading the ceremonies and meeting with his staff and representatives of partner agencies. He refused to put on his oxygen nasal cannula, and played his mind-over-body game well.

No one would have suspected they were meeting with a patient barely out of the dark woods of severe COVID-19.

We told him later that we were sure everyone would have understood if he skipped the proceedings because of his condition.

He answered: “I did not want to use my sickness as an excuse to not do what I promised the Filipinos I will do … That is my commitment and I will do that as long as I can.”

Greco’s turning back from his COVID Rubicon is an inspiring story of what strong faith in God can do, especially when you feel you’re literally clutching at straws.

“I know that it was God at work and things will work out,” says Greco now as he looks back. “I was confident because I was seeing God moving in everyone’s heart and putting different people together—whom we did not know but are helping us.”

Despite his very low oxygen levels at some point, he remained conscious. “I generally knew what was going on—the situation and conflicts—because I was listening though half-asleep, but my mind was extraordinarily sharp. And I was determined to go through it and walk out of it.”

Greco felt that the Lord was with him the whole time and was giving him glimpses of what would happen next.

“That’s why there was no fear in my heart. But now learning what I went through, it would have been different if I knew the details of what I was going through then,” he says in jest.

Aside from Greco and Nina, another revelation in his near brush with COVID death was his mother—Dr. Meth. Normally, doctors would not want to be involved in the treatment of a critically ill family member because one’s judgment and decision-making could be blurred. She actually served as the medical officer, coordinating with all of the doctors. Such nerves of steel were truly amazing.

“It is all about God’s goodness and mercy,” she says. “I want to give Him all the glory.”

Indeed, such calmness and composure amid a high-pressure situation involving your own son can only come from a deep connection with God.

She shares: “So many times in the young lives of all my sons, death knocked, not once but many times. I had one son who died at age 1. From then on, I asked God, ‘Please, Lord, never again allow my sons to die before me’ … I draw my courage from Him in moments like these, knowing that there are human errors even in hospitals. I made sure my presence is felt like a hawk among hospital staff … My heart knew God will come through when my sons are in danger.”

Indeed, God came through in Greco’s case, as faithfully as He promised He would for his people who trust in Him. This is the kind of faith and humility that our nation needs to express now, so we could allow God to come through for us, as well as He did for Greco.