Some painful lessons from India

One can’t help but have ambivalent feelings when one looks at the COVID-19 situation in India, where the Delta variant was reported to have originated. We’re so happy to see the colossal, truly amazing 95 to 99.5 percent drop in the number of new cases in some Indian states like Uttar Pradesh and Delhi, but feel sad that we could have enjoyed the same thing here in our country, if only our health officials bothered to listen and heed some proposals that have been offered since March.

The lessons we can learn from the Indian experience may be painful because so many lives have already been lost here, which may have been saved with the modified strategy that has been proposed.

We all know that in March and April, the whole of India was devastated by the Delta variant with new cases reaching more than 400,000 per day at its peak. In late April, the All India Institute of Medical Science (AIIMS) and Indian Medical Research Council (IMRC) strongly recommended the use of ivermectin for early treatment of cases and prevention in those exposed to an infected person. Some Indian states immediately adopted it, but some states like Kerala obediently followed the World Health Organization (WHO) advisory not to give ivermectin.

The differences in outcomes in these Indian states are as clear as night and day.

Now, Uttar Pradesh, one of the densest states in India with a population of 230 million (more than twice the population of the Philippines), has reported an average of less than 30 new cases daily in the last two months, with less than 400 remaining active cases in the whole state. Nearly half of its 60 plus districts have been declared COVID-free with no remaining active cases, and no new cases reported.

A similar dramatic improvement in their COVID situation can be seen in the Delhi state, which is like our National Capital Region.

The health officials in these Indian states have stood their ground despite pressures from the WHO and other agencies to pull out ivermectin from their treatment protocol. These states continued to give out early treatment and prevention kits containing ivermectin for free to all those who tested positive, including other members of the household.

Just like here, they have multigeneration households in India, and when one member of the family is infected, the entire household is likely to be infected because of the crowded living conditions, particularly in the rural areas. The protocol in Uttar Pradesh is to treat the entire household immediately. And it is apparently working very well.

Uttar Pradesh and Delhi have attained what we have been labeling in our commentaries as “herd protection” with their prevention and early treatment kits. It goes without saying that their other standard health protocols are also helping in having attained and now sustaining their “herd protection.” 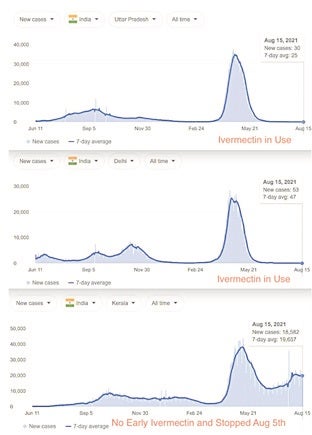 One might think that Uttar Pradesh must have ramped up its vaccination rollout, accounting for its success in stemming the tide of COVID. As of two weeks ago, it had one of the five lowest vaccination rates in India, with less than 6 percent of the population vaccinated.

Let’s look at the stats of Kerala (population: 35 million), which is one of the top five in the whole of India for its vaccination rate. It has vaccinated more than 70 percent of its citizens 45 years and older, and nearly 60 percent of its population has received at least one dose of the vaccine. We would expect that with its smaller population, and much higher vaccination rate, the control of cases would be more dramatic in Kerala. We were quite surprised to see the figures.

Kerala has been averaging more than 20,000 new COVID infections daily in the last two weeks. It has not recovered since the peak of the surge five months ago. Since Kerala has just a third of our population, it’s like having 60,000 new cases daily here. You can just imagine the strain on their healthcare. And it’s all because their health officials chose to obey the guidelines of the WHO. Their local experts opted to align themselves with the WHO guidance. Blind or diplomatic obedience may not be good all the time.

Kerala leads India’s 29 states in the number of new cases daily, and continues to account for more than one fourth of India’s daily deaths, although it only comprises 3 percent of India’s total population.

Contrast that with the ivermectin-using Delhi, which has a similar population size as Kerala, but recorded only less than 50 new cases daily and no deaths in the last three days. More dramatically, Uttar Pradesh, which has a population size more than seven times that of Kerala, had only an average of less than 25 new cases daily in the last seven days and an average of three to four deaths a week.

Several months ago, Kerala officials were confident they could lead India in showing a remarkable recovery from the Delta surge. And they hedged their bets on vaccination, which they rolled our very effectively. It may serve as a validation of what we’ve been reiterating in this column, that a vaccine-centric strategy and overreliance on it may be a source of disappointment later on, as the state of Kerala may be realizing now.

While there is no disagreement that protecting the elderly and the immunocompromised with vaccination is a strong pillar for protecting the population, it may not be so for those who are younger and with no significant comorbidities. The population may benefit more from a multipronged, multi-drug strategy as experiences in Uttar Pradesh and other Indian states using ivermectin plus other drugs are showing.

As they say, the proof of the pudding is in the eating. INQ