5 books that explain #NeverAgain to your kids | Lifestyle.INQ ❮ ❯ 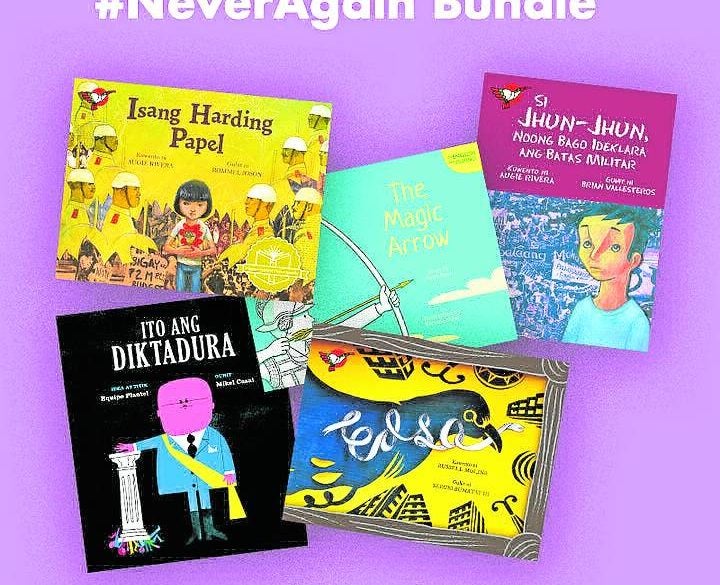 The #NeverAgain bundle from Adarna House

5 books that explain #NeverAgain to your kids

Until March 4, buyers can avail themselves of the set for P381 (regular price is P545), a 30-percent discount. The books (and more) are also available on buribooks.com, Adarna’s online library of Filipino children’s books.

Since my children’s school has subscribed to it, we were able to access these books and made our Edsa Day a bit more meaningful.

Since the topic is heavy, we didn’t read everything in one go; we made a weekend of it.

“Edsa” (for ages 8 and up; P99), story by Russell Molina, illustrations by Sergio Bumatay III

We read this one first. It was a counting book showing various moments during the Edsa Revolution. I had to translate the Filipino and explain the drawings for context lest its meanings go over my kids’ heads. I grew up seeing those visuals of tanks, nuns and flowers, and was actually there with my dad on the last day.

We can easily take this for granted and expect today’s kids to be familiar with these images, too. This book is a unique way to remember this major historical event with them.

This was in English and Filipino so it saved me the translation but I still had to clarify situations and ask my kids questions to check not only for comprehension but also to know what they felt.

Jhun-Jhun plays tumbang preso with his friends, and wonders why his kuya no longer plays with him and is always away from home. He gets a shocking, firsthand experience at a Mendiola rally.

The book gave a glimpse of how life was “back in the day” as well as children’s rights during these times.

“Ito ang Diktadura” (for ages 10 and up; P149), idea and text by Equipo Plantel, illustrations by Mikel Casal

What is it like to live in a dictatorship? This book is part of a series in Barcelona called Books for the Future. It was translated into Filipino, and is still relevant to this day, noting that when the book first came out in 1977, there were about 40 countries in a dictatorship; 40 years later, there are still 36. Perhaps the future still has not come, the book observed, but maintained hope that freedom will come soon.

It also mentioned dictatorships in the guise of democracies, countries with dirty elections with rampant cheating and corruption, no respect for human rights and leaders who lie.

Among the 24 portraits of dictators worldwide, Ferdinand Marcos joins the ranks of Mao Zedong, Saddam Hussein and Adolf Hitler. There is a short quiz at the end of the book, with a call for young readers to send in their opinions and answers to questions to Adarna House.

This book was tough for me to read. Not because I had to translate the Filipino, but because it’s hard not to get choked up and emotional about it. It’s a sober reminder to be grateful; not all parents get to be with their kids.

Seven-year-old Jenny visits her mother regularly at a camp during martial law in the ’70s when discipline is forced and curfews are the norm. For years, they cut paper flowers, which they decorate their room/cell with, but her mother still doesn’t get to come home.

The illustrations are beautiful and evocative of life during that time with references to Nutribun, santan nectar and gumamela bubbles.

“The Magic Arrow’ (for ages 8 and up; P99)” in English and Filipino, story by Bonet Banal, illustrations by Korinne Banal

This was not on Buribooks (perhaps because it was published only in 2021?), so we haven’t read this one yet.

Here’s the synopsis: The mighty king always says “No—no” to books with colorful pictures, reading out loud, and singing and laughing in the streets. What happens when the island kingdom’s blacksmith decides it’s time for the king to change his mind?

As parents, we may not get a say in what is being taught in our schools, but we get to play an active part in our children’s education. They inherit our habits, lifestyles and ideologies.

Just as we stack on enrichment courses in math, reading, music or sports to their existing curriculum, the onus is on us when it comes to our children’s values. It’s up to us to show them what #NeverAgain means. —CONTRIBUTED