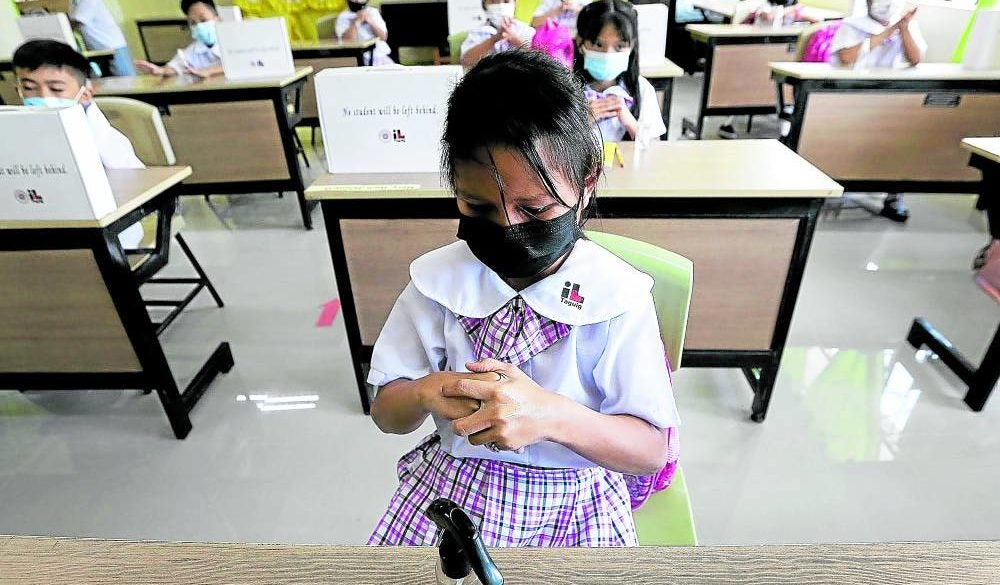 Provided standard health protocols are still maintained, face-to-face classes of schoolchildren may already be considered, even without requiring mandatory vaccination. —RICHARD A. REYES

We can relax mad rush for mass jabs–for now

Patients have been asking us if they need to continue taking prophylactic medicines for COVID-19. As we’ve written in previous commentaries, we recommended and still recommend ivermectin both for prevention and treatment of the viral infection.

However, Omicron has changed the rules of the ballgame. Since it’s relatively much milder than the Delta and the other variants, and with the current low positivity rate (low risk of getting infected), we have advised our patients to stop taking it regularly for prevention.

We advise them, though, to keep some stocks of the drug, and to take it as early treatment should they develop any suspicious symptom of COVID-19. They have to contact their physicians for specific instructions how much to take and for how long. It should not be taken indiscriminately without doctor’s advice.

For those at very high risk for infection, such as medical front-liners attending to COVID-19 patients, prophylactic treatment may still be recommended. The same may be advised for elderly and other immunocompromised individuals living with medical front-liners assigned to the COVID wards or emergency rooms.

But for all the rest who are considered healthy—particularly children, adolescents, teenagers and young adults—the best immune protection is boosting one’s natural immunity with a healthy diet and lifestyle, adequate sleep and sunshine exposure, and natural immune-system boosting supplements.

For us, mandating vaccination for these healthy sectors of the population, and possibly requiring it every three to six months, is ill-advised and tilts more to the potential harm side. We’ve been reiterating this in this space since March last year, and we believe this has become more tenable with the current Omicron variant.

By all means, we believe the Department of Education can safely resume face-to-face schooling or its hybrid version without requiring vaccination for the students, provided standard health protocols are observed. We should already discard our super-paranoid attitude toward COVID-19. In several columns since February last year, we discussed how excessive fear and paranoia (victim’s mindset) can retard our recovery. We should have a victor’s mindset instead, and learn how we could coexist with the virus.

Well, we received a few unkind comments for such “irresponsible” commentaries that could endanger the lives of so many, but when several countries like Singapore later announced a similar change in attitude towards the pandemic, we didn’t rub it in anymore, and just hoped our health officials would loosen a bit their extra-tight hold in their anti-pandemic response.

We welcome the announcement of Health secretary Francisco Duque III that they’re already considering to downgrade further the alert level in Metro Manila and other areas to the lowest possible, and we hope that includes finally junking the vaccine pass, and hopefully the vaccine mandate, too. Several countries have already discarded vaccine mandates, either out of a late realization of its irrational basis or due to massive public pushback.

For a while, some couldn’t help but get the impression that we were just mandating mass vaccination since we had a lot of near-expiring stocks of vaccines. We don’t think this was the real reason, but we’re also glad to hear Secretary Duque announcing the plans to donate our extra vaccines to low-income countries, which still need additional supply of vaccines to get a good portion of their population vaccinated. That’s better than trying to get these experimental vaccines unnecessarily into the arms of our people, especially our children and teenagers.

We believe we can relax the mad rush for mass vaccination and boosting, at least for now. Some readers sent messages that our forecast made at the start of the Omicron surge again came true.

We wrote that it would be like a roller-coaster ride for a quick three weeks but starting mid-February or early March, we could all heave a sigh of relief and say, “That was scary but a fun ride!” By the “fun” part, we meant that all of us who were exposed to Omicron already got free natural vaccination or boosting without us realizing it, and there’s no need to get a synthetic vaccine to boost our immune system.

An Omicron infection would have given us the most updated version of immunity no amount of vaccination could give us. All current vaccines are actually based on the ancestor of Omicron—the original wild type virus from Wuhan. It’s like preferring to use the old Nokia cellular phones instead of the latest iPhone. Immunity from an Omicron infection gives us this immune “iPhone.”

We believe we’ll get a lull from any COVID-19 surge in the next four to six months, and it would be a good opportunity to progressively but still cautiously open up the economy, and revive our domestic tourism by junking vaccine passes. Dr. Marivic Villa, a medical specialist based in Florida treating a lot of high-risk COVID-19 patients, posts pictures and videos showing that since six weeks ago, everything is back to normal in Florida and several other states. The mall parking lots are full; the queues to popular restaurants are like pre-pandemic; the pubs are alive with boisterous customers cheering and toasting.

The number of new confirmed cases in the US per million population is still much higher than ours, but despite the relaxation of many of their health protocols, their cases still continue to go down. It’s now around 95 percent lower compared to its peak of more than 800,000 new cases daily in mid-January.

Do you think it’s due to the mass vaccination? With all due respect, we don’t think that contributed significantly. It was more likely due to Omicron getting a good number of the population exposed and allowing them to develop a more robust, updated and longer-lasting immunity. We agree with many experts’ opinion that Omicron has achieved what no vaccination has achieved or could ever achieve.

So again, we hope the government would reconsider halting mass vaccination and boosting for now, allowing the lower-risk sectors of the population, including schoolchildren, to get naturally exposed to the Omicron variant while we still have it.

Why vaccinate against something which is almost just as mild as a seasonal flu, and can give one the immune protection against possibly deadlier variants later on? An Omicron infection can likely help prevent severe disease should another more infectious, hopefully not more virulent, variant come along during the latter part of the year. INQ