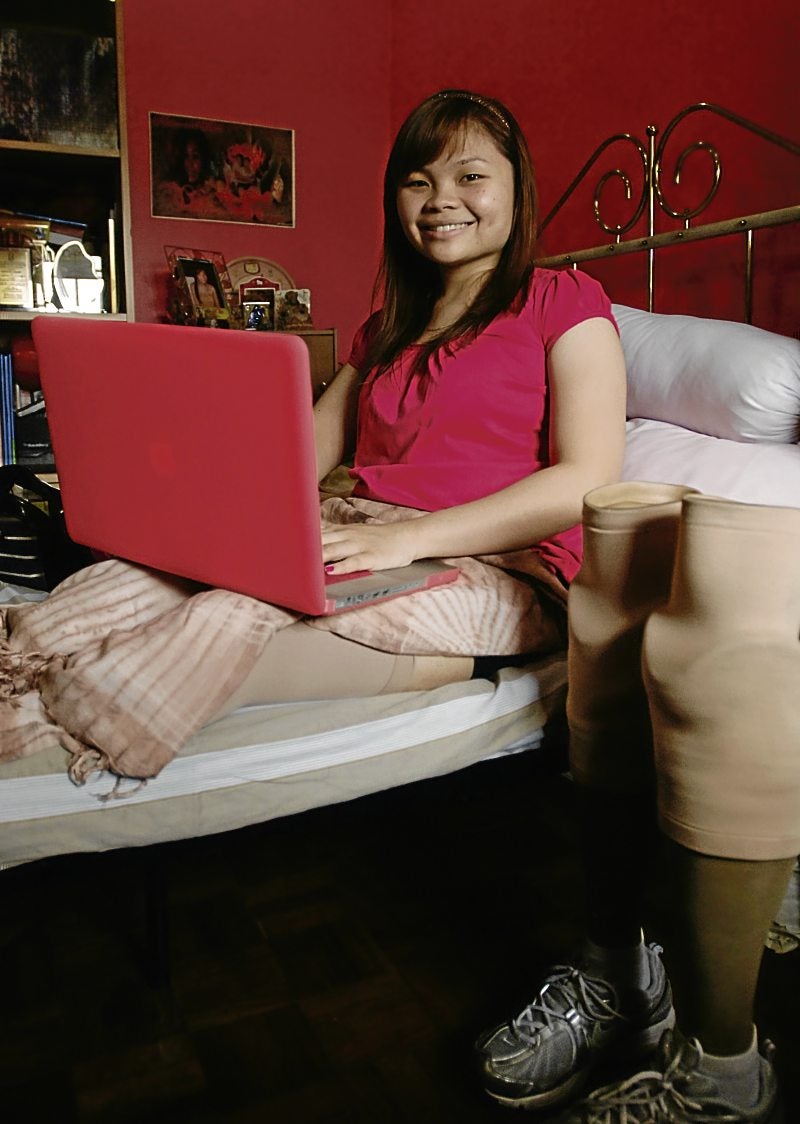 “Kuya, napagod ka ’ata paakyat [You look like you’re exhausted from that climb],” she teases our photographer, as we sit down for an interview in her room – after climbing three flights of stairs at their residence in San Juan.

She’d just come from a holiday break in Cebu with some friends, but that didn’t stop her from accommodating our request for an interview.

“It was fun. We went sightseeing, went on food trips,” she says of her first vacation since she lost both legs in the explosion that rocked the last Sunday of the bar exams at the De La Salle University on Taft Avenue last Sept. 26, 2010. Raissa was there to cheer on a sorority sister who was taking the exam.

She may have lost her limbs in the tragedy, but the law student is living her second life to the fullest, and inspiring others to do the same.

“I’m busier now,” she says. “I’m more focused on school, so now my dad handles the [meat shop] business which is under my name.”

Raissa has also been undergoing therapy and rehabilitation for her prosthetic legs thrice a week. When she’s not using them, she gets around on a wheelchair and with the assistance of a caretaker.

The blast has changed her life completely, but only after a month’s hospital confinement, shares Raissa, who was back in stride by November as a second year law student at San Sebastian College.

It wasn’t easy getting back into the groove, she recalls. “I had a tough time,” she says in Filipino.” My brain only started functioning again in March. I’d find it difficult to memorize. I’d be reading a passage, and it would simply bounce off because of the anesthesia. I’d feel like an airhead at times. Eventually, I felt better. Now I want to catch up before our finals.”

She did, and now hopes to attend summer classes shortly.

“I didn’t want to lose momentum,” Raissa explains on why she didn’t just take a much-needed break. “The doctor said it was okay, and I knew I could handle it. It became my statement of faith in God, that I could surpass all situations.”

Apparently, she’s wasted no time getting back on her feet, figuratively and literally. She will be receiving a lighter, tighter pair of prosthetic legs this month for walking and jogging, sponsored by the Nippon Foundation.

After the blast, Raissa has become an icon of strength and hope, an everyday hero who’s now fielding media interviews and photo ops with strangers, and being invited to speak across the country.

“The support I received surprised me,” she says. “When I was in hospital, a stranger came just to tell me that I inspired him. When I go to Cebu or Bohol, people say ‘hi.’ What happened has been frustrating since I’m not a bad person, I did nothing wrong. But there’s a purpose to all these. I’m still thankful that God works through me to give strength to people who are losing hope.”

She has resumed attending church services, and has regained her voice in the chorale. Singing now can be tiring (“nakakangalay),” as she has to prop herself up while encouraging everyone else to join in the worship. “But at least I can still contribute through my voice. It’s my way of giving back to Him,” she says.

Her father Roberto himself expresses surprise at how fast Raissa has reclaimed her life. When she was growing up, he always saw her as a simple, well-balanced daughter. After the accident, he realized how extraordinary she is: “She’s different. Ibang klase talaga ’tong anak ko. Bilib ako, ang lakas ng loob niya.” He recalled how doctors had advised him and his wife to be ready to get Raissa’s spirits up as she might have to battle depression, but: “We never had the chance to do that.”

He adds with a chuckle: “Now I am introduced as the father of Raissa Laurel, the hero.”

Indeed, Raissa has given a voice to other victims of the blast and to the disabled. In February, she joined her sorority, the League of Lady Barristers, in organizing the “Two for Taft” concert and fun run. “It was for the bar exam victims, for their medical expenses. Because our rehab (treatment) is ongoing, it may be for lie. We have to train, exercise. It’s a long process,” she explains.

So inspiring was Raissa’s story that the Nippon Foundation decided to open a prosthetics school at the UERMMC, where Raissa is undergoing therapy, her father reveals.

But Raissa is quick to deny that she had a hand in the Foundation’s plans to open such a school this June. “Experts from other countries will train Filipinos to make prosthetic legs available in the Philippines,” she explains. The school will also teach Filipinos to manufacture artificial legs locally to bring down their cost and make them more accessible to the disabled.

Not surprisingly, Raissa’s current advocacy is to push the rights of Persons With Disabilities (PWD). “Filipinos aren’t very aware of this issue yet. In other countries, PWDs are given priority; they can even drive because of customized cars,” she says.

She hopes to make concrete moves on the issue soon. “I dream that one day, everything becomes accessible – that they’d be respect for the elderly and PWDs. That those who need special assistance will get priority, and that you don’t have to remind people about it because respect becomes a given.”

In the meantime, the blast is still under preliminary investigation by the Department of Justice, but Raissa remains optimistic that she is on the winning side.

“The suspect cried, right? Why would he cry? He has no right to cry,” she says in Filipino. “He didn’t get hurt. If there’s anyone who has to cry, it should be us. So who looks weaker now?” she asks. “I have faith that God will give us justice. God is on our side. Kahit ano’ng deny, sa huli, kami pa rin mananalo (We will win in the end).”

Despite the slow pace of investigation and court proceedings, the law profession hasn’t lost its shine, she says. “Next time, I know where to put myself. Now I’ve seen both the good and bad side of the law.”

And for those wondering, the sorority sister Raissa was cheering on passed the bar exams. I’m thankful all our efforts paid off,” she says, with a satisfied nod.

The tragedy has also strengthened her father’s faith. “At first I kept asking myself why this had to happen to Raissa, to our family. Now I see there really was a bigger purpose. God had bigger plans,” Roberto muses.

Enjoying her first downtime in months, Raissa is now amazed at how she has managed thus far. “I was surprised at my recovery, too. God truly prepared me for it, gave me emotional strength to accept things. If it were just me, I wouldn’t be able to handle it. I’m afraid of blood! But I surpassed that. I can’t explain it. It’s not from me. The strength really came from God.”

Perhaps the family’s biggest triumph is that life has gone on for them. Raissa has just celebrated her 24th birthday last April 23. Things are moving so fast she hardly has time to make plans.

“When you’re faced with trials and problems, when life gets too complicated, keep your faith and don’t give up. This too shall pass. It may be just a test of your patience. Just have faith in God,” says Raissa. •