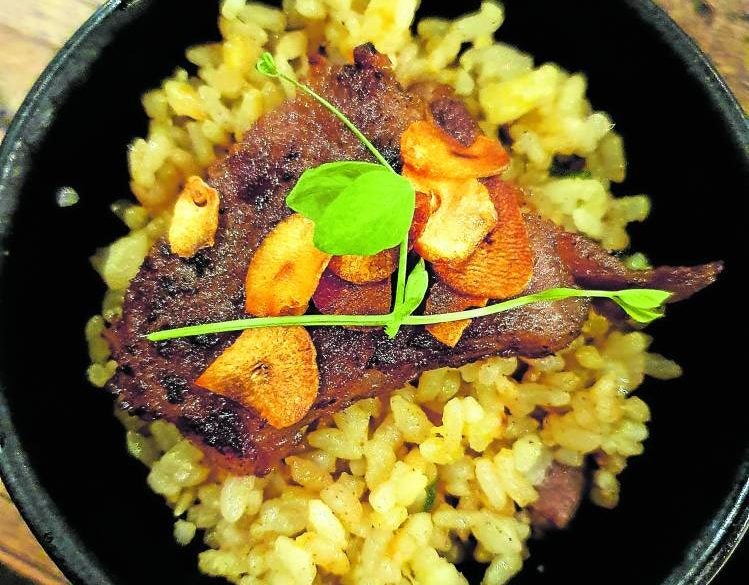 It was a night of sublime beef, pristine sake and wonderful company.

Last week at Ikomai, chefs Carlo Miguel and James Antolin had us savor Sendai beef several ways. Sendai is the capital of Miyagi Prefecture and the home of Sendai beef.

The cattle are raised by registered farmers, and only meat that has been graded A5 by the Japan Meat Grading Association can officially be christened Sendai beef.

It stands out for being lean and being marbled in equal measure. Other characteristics that set the Sendai Wagyu apart are its fine texture, tenderness, delicate flavor and pronounced juiciness.

The reason for these is that Miyagi is a rice-growing region blessed with pristine water. As such, there is an abundance of rice straw used as feed—the secret to fattening cattle. The prolonged feeding of rice straw is what makes the meat a 5, the highest grade of meat.

When I walked into Ikomai, there was a sprinkling of beef-tasting stations.

I bumped into familiar faces while sake was being served. That evening, my sake of choice was the Miyakanbai Junmai Daiginjo—fruity, clean, silky and just the right kind of dry. It paired perfectly with every dish served that evening.

While pleasantries were exchanged, the chefs made their entrance.

James explained how they planned to serve different cuts of A5 Sendai Wagyu beef.

“The idea is to showcase this beautiful Japanese beef with western flavor profiles,” said James.

Carlo mentioned that when they cook high-quality beef such as the Sendai, their first task is to cook it as little as possible to allow the natural sweetness and flavor of the beef to shine.

The dishes came one by one. The short ribs, prepared two ways, were served.

The tataki style was seared over high heat, to keep it very rare on the inside, cooked just enough to activate the fat and to bring out the flavor. It was finished with parsley, garlic, lemon and capers.

The second way was seasoned with miso, and cooked over live charcoal to maximize its flavor.

The next cut for tasting was the neck, cooked long and slow. This meat cut is delectable, prepared sous vide with red wine for 24 hours at low temperature to preserve the marbling and make the meat tender. It was paired with mashed potato, red wine jus and a little bit of ikura.

The Sendai Wagyu chuck, Carlo didn’t want to cook at all, he said. Instead, armed with a long-treasured recipe, he churned a tartare from the well-marbled cut and finished it with black truffle to further enhance the flavor.

It is the duty of chefs to prepare well-balanced meals for their clients. To accomplish this, we were served seafood from Canada and Iberico pork.

My personal favorite that evening was the gindara sashimi that was flown in. It was divine—delicate, buttery and with a tinge of sweetness. It melted in my mouth.

The gindara was also presented as sushi, done the Ikomai way.

Quickly seared were the scallops, finished off with a drizzle of simple soy and clarified butter, and, of course, a twist of lemon.

Then came the tako (octopus) carpaccio with ebiko—thinly sliced octopus with citrus ponzu with a touch of spicy rayu (chili) to complement the octopus.

The Iberico pork jowl was slathered in kakuni sauce after being cooked sous vide for three hours and grilled. It was visually appealing—lacquered and, by its looks alone, mouthwatering.

Sendai beef fried rice was served to complete the meal, garnished with a slice of miso- grilled Sendai short rib.

The evening ended on a sweet note, with a delightful shortbread—a delicate butter cookie with a miso caramel cream cheese and cheddar filling.

There was craquelin, too, a bright yellow choux puff, with lemon curd and a combination of cream and Gouda cheese. It was adorned with gold leaf.

It was a pleasure for James and Carlo to work with such premium ingredients. They shared some of their recipes from the charmed evening with us, in hopes that you would also give Sendai beef and Canadian seafood a try. (Available at High Tower, tel. 86640017)

Mix all together, season and divide into four plates. Serve with toasted sourdough bread, crostini or crackers.

Salt and pepper, to taste

Season beef on all sides with salt and pepper. Sear on high heat to crust the beef but keep it raw in the center. Rest for 5-10 minutes

In a bowl, grate garlic through a microplane, then add lemon zest, parsley, capers and olive oil. Season to taste. Slice beef across the grain thinly.

Serve on crostini topped with the garlic, lemon and caper mix.