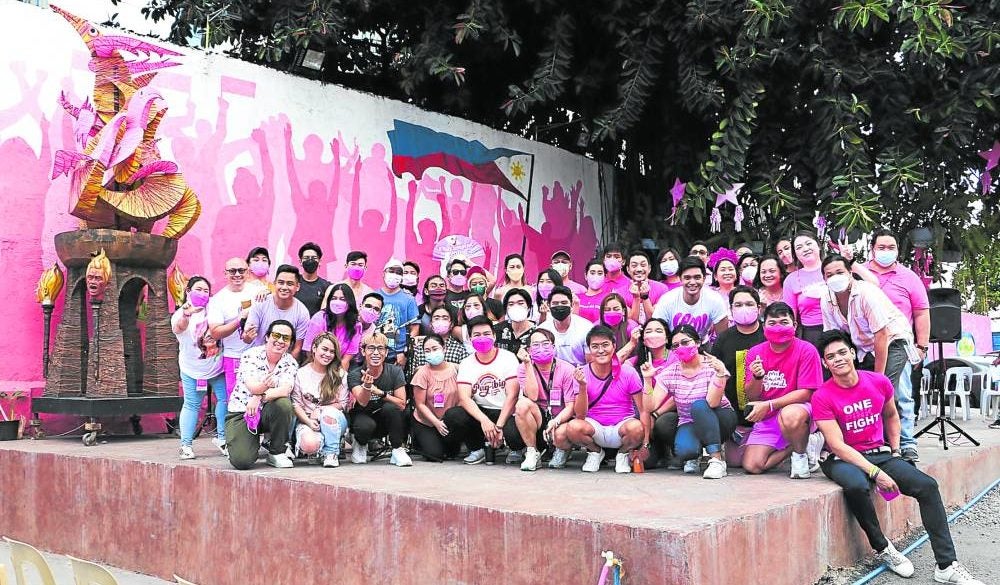 Happy energy bounced off between volunteer performers and the limited audience in the first and biggest gathering of Filipino theater artists in the “new normal” at a free concert in Quezon City.

The community show “Teatro Robredo-Pangilinan: Buhay Ang Entablado Para Kay Leni-Kiko!” on April 3 was organized by the Theatre for Leni-Kiko group led by founder Bea Racoma and attended by 300 people (online registration was required to avoid crowding). The gig, which united the top theater houses in the Philippines, was staged to express the community’s support to presidential candidate Vice President Leni Robredo and her runningmate Sen. Francis Pangilinan. Meanwhile, theater artists who have expressed support for presidential candidate Ferdinand “Bongbong” Marcos Jr. were the husband-and-wife team of Isay Alvarez and Robert Seña, and singer Wency Cornejo.

“We were so excited!” organizer and artist Jay Barrameda said. “We started planning for this just three weeks ago and everybody was professional, gracious and generous with their time.”

As one of the performers who have been limited to online gigs for the past two years because of COVID-19, Barrameda said the nerves in performing on a real stage before a live audience was back: “Sobrang nakakakaba (it was very frightening), but we are doing this because of a goal and we appreciate that people showed up.”

Del Rosario played the guitar for Justine Peña who sang “Mariposa” and Vic Robinson who performed “Bawat Daan” from the musical “Sa Wakas.”

An ensemble performance from the cast of the martial law musical “Dekada ’70” wowed the crowd, followed by songs from “Mula sa Buwan,” sang by MC Dela Cruz, Phi Palmos and Ronah Rostata. (Created and directed by Pat Valera, “Mula sa Buwan” will also be back on stage later this year!)

De Jesus’ songs for “Himala” were performed next. Floyd Teña sang “Uyayi ng Ina,” while Barrameda and Matel Patayon did a duet of “Walang Iba.”

Chesko Rodriguez did a number from the beloved “ZsaZsa Zaturnnah” musical.

To assure that the audience and staff were safe, water, masks and medical attention were provided in the venue.

Next were original pieces by theater couple Nelsito Gomez and Sarah Facuri. Gomez read the poem “I Wish” while Facuri sang “Hiling.”

The fun pop track “LeniKo” performed by Go and Atadero was debuted that evening. It was composed by Jay Adlao Block, Gino Cruz and Go.

Racoma said the show was staged through the “community efforts” of not just the performers by also the artistic and production team who all volunteered their time that Sunday.

Gab Pangilinan performed “Rosas” with Del Rosario and stayed until after the show to have selfies taken with the audience.

Everyone got back on stage for the finale number “Di Niyo Ba Naririnig?” a translation of the Broadway hit “Do You Hear the People Sing?” from “Les Miserables.” “Teatro Robredo-Pangilinan Buhay Ang Entablado Para Kay Leni-Kiko!” was the musical party that the theater-loving audience and performers both needed, signaling that with protocols in place, Filipino theater is back.