Denmark is halting mass jabs—here’s why PH should, too | Inquirer Lifestyle ❮ ❯ 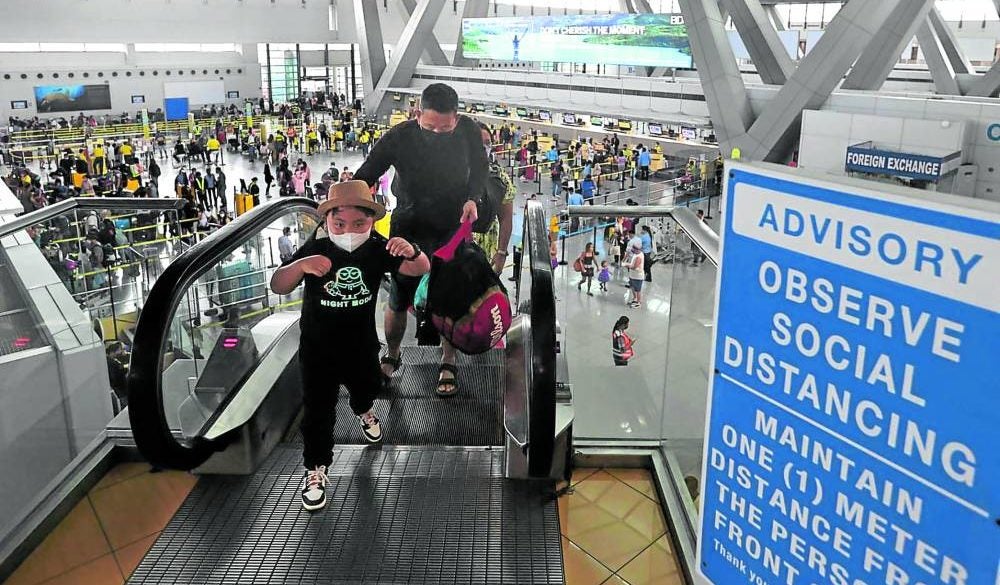 Denmark’s strategy is to expose the lower-risk sectors of the population to the virus, so they could develop natural immunity. Above, Filipino travelers with kids during the Holy Week break. —Marianne Bermudez

Denmark is halting mass jabs—here’s why PH should, too

Last week, Denmark announced that it’s stopping its mass vaccination program for now. Their health officials have reasoned that they believe that the virus is already under control, with hospitalizations and deaths remaining within manageable levels.

With a population of less than 6 million, they’re still averaging around 1,700 new cases daily which would be equivalent to around 30,000 new cases if we were to extrapolate it to our population. But, they’re not worried. In fact, last February, it made the bold move of lifting all of its mandated COVID restrictions despite the Omicron surge setting all-time record highs. Their strategy was apparently to expose the lower-risk sectors of the population—such as healthy children and young adults—to the virus, so they could develop natural immunity to ward off future infections.

We can’t help but mention this pivotal decision of Denmark since this was what we’ve been repeatedly proposing in this column since last year, and more so, early this year following the Omicron surge. We’ve been saying that natural immunity, not vaccine-generated immunity, is our real key to attain herd immunity.

We’ve repeatedly argued against mass vaccination since March last year, and proposed a focused and protective vaccination for the high-risk sectors like the elderly, those with comorbidities and others with weak immune systems. Yes, we should still aim for herd immunity but we should realize by now that mass vaccination is not the way to attain it.

It’s even plausible that mandatory mass vaccination is drawing us farther from attaining the elusive herd immunity. As the Spanish pandemic of 1918 has taught us, it’s only when a big majority of the population has been exposed to the virus and likely have developed natural immunity can we hope to attain the immune herd protection we need to convert the COVID-19 pandemic into an endemic, just like the seasonal flu.

Up to now, we see our health experts still going for vaccinating the entire population, supporting mandatory vaccination even for healthy school children age 5 to 11. We have been told already that some health officials are again planning to require updated vaccine passes to be required to enter establishments, and ride public transportation. Full vaccination has also been redefined as having the primary doses of the vaccine, plus updated boosters every four to six months.

We hope our government and health officials could take a cue from Denmark, which has been hailed to have one of the more successful and agile antipandemic responses in the world. We should not stick to old strategies and recommendations just because international health agencies say so, or other advanced countries do so, or simply because we have a billion-dollar worth of expiring stocks of the vaccine we should dispose of before their shelf-life expires.

Those who got infected with the virus and survived it are blessed in a big way, because they have already developed natural immunity that would ward off the virus the next time it’s encountered by the body’s immune system. Since an Omicron infection is very mild, particularly in healthy individuals, now is the chance to develop natural immunity in these low-risk sectors of the population instead of encouraging them to get booster shots.

As I shared in this column, I had my COVID-19 infection last year, and despite the severe initial symptoms, they started to dissipate after six hours of initiating an all-natural regimen (high-dose melatonin, zinc, vitamin C, vitamin D and virgin coconut oil). I was symptom free in 48 hours, and resumed working from home by Day 5. I praise and thank God for giving me a strong immune system, and I don’t think anyone could argue that a God-given immune system is superior to a vaccine-generated immunity.

There’s now overwhelming data showing that after a COVID-19 infection, more than 95 percent of those infected remain protected due to the T-cells and B-cells which have durable memories against the virus. After several months, the antibody titers may already be low but their temporarily resting T- and B-cells are readily activated once the virus is encountered. This prevents the reinfection, or at the very least, can prevent the development of severe disease. So the risk of hospitalizations and deaths is also markedly reduced in those with previous infections already.

Will vaccinating these individuals provide additional protection? Studies suggest that there’s no meaningful additional benefit from vaccination in these previously infected individuals. As we’ve reiterated in previous columns, God-given natural immunity does not have to be tampered with, except in immunocompromised individuals.

Going back to the Spanish flu pandemic of 1918-1920, the historical records showed that more people died in the second wave. If one reviews any intervening event that happened, one event seems to stand out, and that is, the attempt to roll out a hurriedly concocted vaccine. This may just be coincidental, but discontinuation of the rollout was followed by two milder waves and the subsequent control of influenza as just a seasonal endemic.

We’ve been recommending since last year limiting vaccination only for vulnerable sectors at risk—the elderly, those with hypertension, diabetes, chronic lung and kidney diseases, marked obesity and other conditions that may compromise the immune system. These are the people more likely to get severe COVID-19 and die from the infection, so they have to be protected with vaccination plus other immune-system-boosting agents.

This recommendation is even more tenable now than the first time we raised it, because we now have approved and available drugs for the early treatment of COVID-19. So there’s really no urgency and no point at all in exposing our children and healthy adults to the potential short- and yet unknown long-term hazards of vaccination, when the risk of severe COVID-19 is not that high anymore.

It’s unfortunate, almost tragic, that our international and local experts are redefining immunity seemingly just to suit their current recommendations. Immunity used to be defined as having sterilizing antibodies and other immune reactions that can protect one from infection—as in smallpox, measles or chicken pox. This is something which all currently available anti-COVID-19 vaccines could not achieve.

So now, immunity is simply defined as being able to activate or stimulate the immune system. We don’t quite agree with this redefinition. We’re lowering the standards for vaccination, instead of encouraging vaccine manufacturers to level up and meet the true required standards on effectiveness and safety.

Denmark will likely resume vaccinations when the cold months or flu season starts, but for now, they’re inclined to allow nature to take its course in providing the population with the more robust and long-lasting natural immunity. The country’s health officials also hinted that if ever they would resume vaccination in the future, it’s not going to be a mass vaccination, but they’ll start looking at “who should be vaccinated, when the shots should be given and which vaccines should be used.”

We really salute Denmark’s health officials for adopting an agile and adaptive recalibration of their anti-COVID response. Denmark is a small country of 6.8 million people. Bigger countries like us can learn lessons from our smaller brothers.