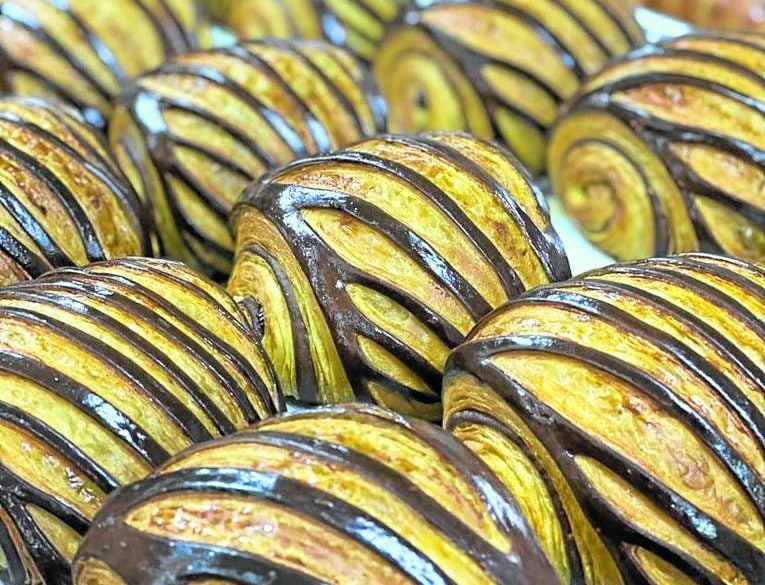 Thanks to the expressways, not only has traveling to Baguio City gotten way faster, but getting their beloved specialties down to the metro has also become a lot easier. From longganisa to a bevy of sweet pastries, the summer capital’s delicacies can now be enjoyed whatever season it may be.

Cassava cake and ‘longganisa’ from Everything Nice

In order to earn extra income, Techie Pantaleon decided to recreate her mom Lulu’s cassava cake and sell it to friends. It was an instant hit, and those who believed in its potential urged the mother of seven to open a restaurant and make the kakanin an anchor product.

After mustering enough courage to be an entrepreneur, she did just that, and in December 2008, welcomed both locals and tourists alike to Everything Nice, a commissary-slash-15-seater café located on the ground floor of their house on Marcos Highway. Her initial menu included breads, pastries, pastas and pizzas.

Through the years, it moved places and transitioned to a full casual restaurant, now situated in Ayala Technohub and helmed by her son Robbie Pantaleon, 26. Busy running Wagner Café herself, she passed the reins of the Baguio institution to her son in February, for him to develop it further.

While taking his masters in Ateneo, Robbie shuffles between cities to run the restaurant remotely as well as a satellite commissary in the metro—one of his first projects.

With a pastry chef, he bakes and sells their specialties from his kitchen in Parañaque, including chocolate crinkles, Baguio longganisa and their cassava cake, in original and tres queso flavors.

“I think it’s really about people experiencing our products fresh. It’s one thing to have some bought as pasalubong but it’s really something else when you have it just out of the oven,” he said. (Tel. 0917-5062615; @everythingnicecafe on Instagram)

If there’s anything Baguio is known for foodwise, aside from ube halaya and strawberries, it has to be Baguio Country Club’s banana and raisin breads. More often than not, tourists hoard these goods, either to give away or keep in stock at home.

Well, people don’t have to travel to Baguio for these anymore, since they now take orders for Manila weekly. Also on offer are their carrot and cheese breads. Simply place your requests via their channels, pay online or via bank transfer, then pick up the breads in a designated spot in Makati. (Tel. 0916-4865488; @bccdeliversmanila on Instagram)

From selling cheesecakes back in 2017, partners Donna Aldaba and Danica Santos switched to playing with laminated dough in July 2020 to rebrand their Epicure Craquelin into Rebel Bakehouse, a viennoiserie that showcases French techniques and Filipino flavors. Baguio, after all, makes for the ideal place for a boulangerie, given its cool weather, which is great for doughs loaded with butter.

Their Dayap Leche Flan Danishes, Triple Chocolate Pain Au Chocolat, Yema Cashew Croissant and Cinnamon Buns are favorites. They post their lineup quarterly, and make many of them available for Manila delivery twice a month. (Tel. 0916-4865488; @rebelbakehouse.ph on Instagram)