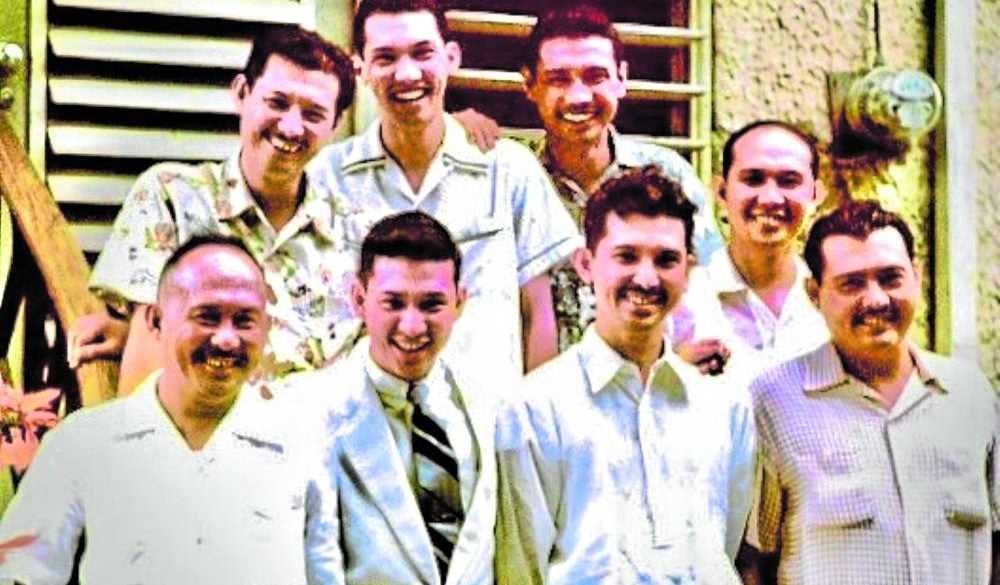 Eight Roces brothers who survived the war, taken one Sunday in 1951 at the entrance of their parents’ home on Park Avenue, Pasay City

Untold stories in our family tree

Growing up in the 1950s, I had had no doubt life would be good, as indeed it was, thanks to the circumstances of my birth—its timeliness, my nationality, my parents and grandparents, my family status; thanks, in other words to my unchangeable karma, my good fortune. Indeed, thanks to the efforts of those who came before me.

And yet when my youngest uncle, Alfredo (Ding to us and friends), asked me for my dad’s and my own personal information for the family tree, I had uncomfortable moments, as I imagine other heirs had, too.

The nine handsome Roces brothers—six of whom are now gone with their parents—were no saints, far from it. But, conscious of the example of their eldest, Liling, a guerrilla martyred by beheading in the last war, the brothers have always stood on the right side of history.

Still, whatever it might reveal, the family tree has had to be put together, and it was their own father, my grandfather, Rafael (the name Liling also took for himself), who began doing it.

A few of the brothers managed to complicate things and, understandably, some of their descendants might have preferred those secrets buried with their dead. My dad’s own branch might look like a tree within a tree itself. Like many men, he had his secrets, although probably more than most.

In contrast, my Lolo Rafael, only one generation removed, had no such secrets to conceal. His eyes and heart belonged to only Lola Enchay. Indeed, soft-spoken and principled to a fault, he was as ideal as they came. It’s been said that Don Rafael had only to give his word, his palabra de honor, and the business was sealed.

Horseman, hunter and sportsman, too, Lolo had stories of his own adventures to share with anyone who would listen, and how I wish I listened more. He spoke mostly in Spanish, and I, a child, yet inadequate in his language, barely understood him, thus missing out on rich writer material. He lived to 81, young by Roces-Reyes standards, but long enough for a chain smoker—smoking was his only vice.

My grandparents’ house, on Park Avenue, had life-sized portraits of the generation before Lolo hung on the wall by the staircase. They used to scare me, their eyes following you and meeting your own when you happened to look, from wherever you were. We cousins never lingered in the area. We always hurried up the stairs shrieking, especially at night, and that infuriated our uncle Marquitos, second to the youngest of the brothers and only 10 years my senior. Lola herself, from her and Lolo’s room downstairs, would feign shock and ask aloud if there might be wild horses running around.

Those wild horses were seventh-generation Roceses by Lolo’s family-tree reckoning. Things only began to get messy in my dad’s, the sixth, generation, and got even messier.

Skeletons in the closet

Imperfect lives make biography writing tricky and delicate—my husband, who has written a few, can attest to that—but that’s what makes for a good telling. My own dad, a lawyer and a five-termer in Congress, had a song for a stock excuse, to him a perfectly a human excuse, for his follies: “Sapagkat Kami ay Tao Lamang.”

Ding is waiting for Dad’s data so he can finish his job.

What to do about skeletons in the closet? Conceal, be kind? My husband warns: “Do that, and people will wonder ceaselessly, and more and more curiously, what you’re hiding, and what else you might be hiding if you did your revealing piecemeal.” I tend to agree: Truth is truth; it’s neither ugly or pretty; it is what it is.

Our great-grandmother on Lolo’s side, Filomena, was not pretty at all. She looked ill-matched, indeed, with the first Alejandro of our line. He was slim, tall, baldish but with a lush moustache. He was of a well-heeled family from Asturias, in northwest Spain.

Filomena was herself a mix, and looked more Mexican indio than Filipino, from her Manileña mother’s side. She was of humbler, but respectable origin. Her father was a Spaniard from Leon, in the Iberian northwest.

I’d have wished Filomena the dainty lass of love stories, although her own love story, with her Alejandro, is captivating enough as written by cousin Beneting Legarda, the late historian and economist.

It may not be what it was, but the Roces name, once upon a time, was held in high esteem, and those of us born into it have basked in its reflected glory, enjoying certain advantages, even privileges, for association.

Pedro Roces, of the first generation, and his son Juan and their spouses were all natives of Pola de Siero, a principality of Asturias. Very little more is known, which is probably the reason no descendants have been named after them. If I named my youngest Juan Ramon, it had nothing to do with our original Juan at all.

It was from third generation that “Alejandro” has become a favorite name. A cousin from the Iloilo Roces branch claimed that the first Alejandro had been a beloved archbishop, again from Asturias. When no evidence of any unholy alliance turned up, I quickly, and with some relief, banished the idea. In any case, every branch from the seven generations back has had at least one Alejandro.

Our own Alejandro, Dad’s brother Anding, had a beautiful first-person story to tell. Traveling in Spain, he heard his name called on the train’s public address system, and when he responded, another Alejandro Roces did as well. Since that serendipitous meeting, their Roces sides have kept in touch, discovering familiar traits and oddities.

Other names have been traditionally repeated—Rafael, Filomena, Joaquin (as in the case of my dad and his close first cousin Chino, the newspaper publisher and patriot), Jesus, Marcos, etc.—compounding the identity confusion.

A family tree should definitely clarify who’s who, but it’s in the untold life stories behind the names that the definitive distinction, even the immortalization, is established.