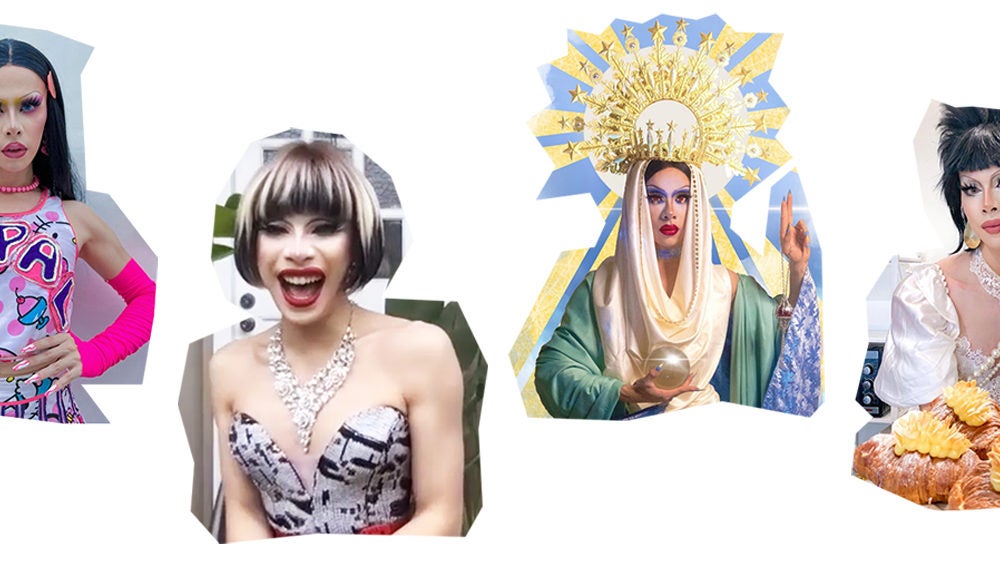 This story is part of season two of “Serving You Style and Substance,” a video series where we get to know bold Filipino creatives with idiosyncratic styles through their influences and the narratives that they choose to explore.

At the last Elephant Party Pride gig, Naia was introduced as a “star on the rise.” With her punky glam aesthetic and flawless lip-synching skills (she regularly hosts drag brunches at Butterboy), it’s easy to see why.

Naia, who describes her drag persona as “someone who just ended her Disney contract and came back from the States to unleash her true self,” sat down with us for the premiere of our second season of “Serving You Style and Substance.”

Hungry for more? Here are snippets from our conversation with Naia, also known as Brian Black , that didn’t make it in the show.

How did you get into drag?

It’s a pretty funny story. In college, I was studying [broadcast communication]in UP Diliman. What had happened was I was watching “RuPaul’s Drag Race” and was getting really into it. I’d make sure to talk about it in all my papers. One time I interviewed one of my grade school friends who did drag—her name is Alexa Whatever—and I went to their bar in Malate. That was my first time going to a local bar. I went backstage and did a documentary shoot for my class and that’s when I figured, “Hold on. I could do that as well.” I mean, I wanted to. It’s just this giddy feeling, seeing these clothes you want to try on for yourself—and now I have all of these things.

Alexa was really pivotal in my journey in starting drag. Sadly, she passed away last 2020. I make sure to honor her with my drag.

So that’s what got me into drag: seeing the local scene booming and wanting to try that out for myself as well.

What do you think about the local drag scene getting more mainstream recognition?

Look. The local drag scene becoming more mainstream, getting more gigs, getting booked more is great. That’s great for all of us. I’m so thankful for all these TV shows that made drag mainstream because it entered my consciousness and now those who don’t know or don’t practice drag are being more aware of it as well. And it’s just generally good for the economy of the drag kings and queens in this society.

So while we still have a lot to go and still so much to do in regards to LGBT rights, the fact that we can go out there and be our authentic selves—I call this authentic, I’m wearing makeup now—[it’s great] that we can do that now. The reaction’s different now. There’ll be some people who won’t like it, but a lot more people are like, “Yas, queen, do the damn thing,” and I live for that.

I’m so happy for my sisters for getting all those gigs, getting those TV shows, commercials, whatnot. It’s really an art form that’s starting to be more respected. I feel like drag queens now can achieve a sort of celebrity status. Just look at Paolo Ballesteros. It’s amazing, you know? It used to be a fake celebrity, you know, very faux. You are a faux glamorous queen. Now you’re actually famous. I mean, I’m not that famous, but let’s manifest that. *laughs*

We love a rising star.

Yes, of course. My star is on the rise, mama.

Can you explain your drag name?

My name used to be Tanya Sativa. I changed my name—I don’t know, how much tea do you want? *laughs* Someone gave me the name Tanya and I went with it. As I was starting to grow up, I kinda saw that I was growing apart and wanted to reclaim my journey as my own. I rebranded and changed my name to Naia. Why? Because I can. I’m an indecisive Libra, I’m allowed to do such things, change my name whenever I want. I changed my name in high school so this isn’t any different. If I change my name from Naia to something like Bethany tomorrow, you’re not allowed to complain. That’s what you’re getting. You’re getting Bethany.

But it’s not Bethany, it’s Naia. It’s inspired by how, when I first started drag, my very very first gig, people thought I was an international queen. Yeah, ininglishan ako. I kinda went with that. Why not, feeling the foreigner fantasy? So I wanted to pay homage to that. Also, I’m from the south, very close to Naia. It’s funny. It’s kind of a fierce drag name when you think about it, Naia. I hope they don’t change it to Femia or whatever, DJ Loonyo International Airport. These memes are getting out of hand. Please stop renaming me, thank you. *laughs*

Yeah, only you can rename you.

Only I can rename myself. Okay, Bongbong?

Have you encountered antagonism against your art?

Oh yes, definitely. I mean, I say a lot of controversial things on my TikTok, and deservedly so. I hate fake news. Who likes fake news except the trolls?

Not everyone’s going to like what you do. I mean, in terms of drag right, there are a lot of homophobes in the Philippines. You have to shrug it off and know that what you’re doing is right and correct and good for you, right?

[Drag is] good for your soul. If someone were to fight me for doing drag, I’ll let them go ahead. At the end of the day, I’m the one who chooses what to do with my life. And yes, I want to superglue nails onto my fingers and nail beds for this wonderful illusion that can’t be taken away from me. It’s why I don’t really give a [censor sound]. But there is a lot of hatred for drag queens and youth who speak up on social issues, so parang, sama-sama na lang tayo, you know? Let’s get hate together.

Oh god, there’s so many. Internationally, I love the “Drag Race” stars: Manila Luzon, Aquaria. And those who aren’t on “Drag Race” or choose not to participate: Vander Von Odd from Dragula, this queen named Twink Trash, I love her. She’s a designer, she has these outlandish ideas.

Locally, I love a lot of queens. I’m very enamored by the likes of Brigiding who moves so effortlessly. Who else do I like? I don’t like a lot pala, char [laughs]. I have to shout out my drag sister Corazon who lives in the same village as me. She’s a pageant queen and I love her so much. She actually lent me this gown.

Who else? Luka! Pura Luka Vega is one of my favorite local drag queens because she’s stupid. No, she’s actually very smart. She does Jesus impersonations and we did a tandem the last Elephant Party. I was Mary, she was Jesus. It was a really fun time. I love playing off of Luka’s ideas as well. Maganda siyang ka-collaborate.

[There are] a lot more queens but I don’t feel like I want to mention any more. You gotta pay to be mentioned here. Joke lang [laughs].

For the local scene, I love designers who are outlandish. For example, one of my favorite local designers is Salad Day, Willar Mateo. She’s my bestie. I met her last year. I was asking for outfits for a project and we just clicked. Now we’re always collaborating on looks together. She’s really great. She has this philosophy where you can’t really design something on paper and translate it in real life. There are some things that your hands can make that your brain can’t. It’s very interesting.

What are your favorite queer spaces?

Well obviously I have to say Butterboy because they’re employing me [laughs]. Thank you, Butterboy, for letting me host your drag brunches. Aside from that, I do love when we have this monthly Elephant Party. Check that out. The venue usually changes, but I always look forward to the Elephant Party at the end of every month. You have your techno raves amongst your other queer artists. It’s a very nice queer space. Come join. If you’re straight, you should still watch. “Are you straight or socially conditioned?” That’s a question you may come to ask when you go.

Of course, there are the drag bars I love going to. You have O Bar, Nectar, all of those places. But I’m also advocating for drag queens to be seen in spaces outside of the typical night clubs. I’ve done some gigs in workout areas, climbing places. It’s very fun. I believe that drag should be seen everywhere because it’s such a personal art form. Who’s to stop me from, after this interview, literally going to Alpha Mart and buying something in this? Who’s gonna stop me? IATF, I’ll wear a mask. I feel like you can see drag queens everywhere and you should because you want to be confronted with such a spectacle [laughs].

Those are my favorite queer spaces, really. Hoping for more, hoping for the resurgence of the things I loved in college such as Today x Future and those bars and safe spaces and whatnot. You know, I love that what we’re doing now is we’re just allowing the gays to reclaim spaces. Like, Pop Up Katipunan. Yes, suddenly there is a gay area for the queer people. Yes, I condone it, I love it, I support it. We should do that to more places. Let’s queerify, what, Palace Pool Club or something. Amazing. That would be the gender revolution of 2022 [laughs].

Yeah, I have to say, Pop Up suddenly becoming a queer space, I love.

It’s so funny to me.