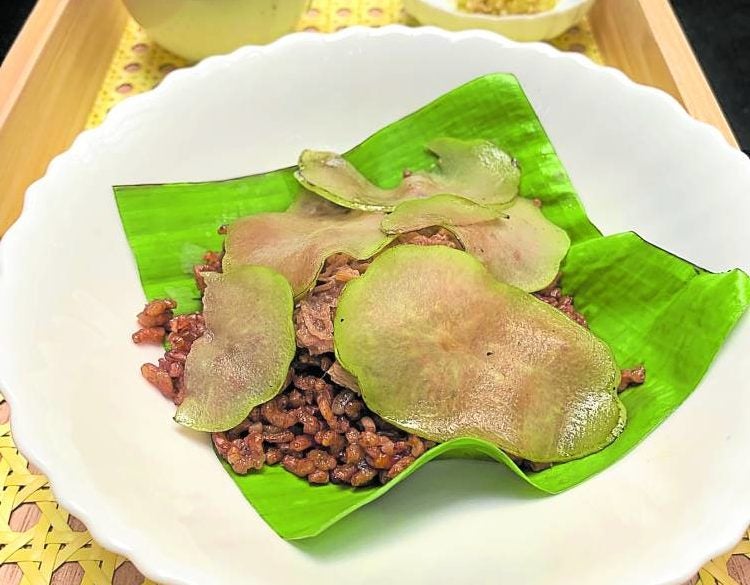 “Pater” with “palapa” and “pampaitum” soup

This private dining spot located in the backyard of a residential home in Parañaque closed early this year to give the young chef a much-needed break. The 24-year-old did go on one, but only for a short while.

Not long after, he had the place renovated (now with air-conditioned rooms) and got back into the grind by researching lesser-known Filipino dishes by visiting domestic regions and talking directly to producers as well as home cooks in time for the August relaunch of Linamnam.

“Basically, during my hiatus, I went to the food producers I work with and tried to learn a lot from them more,” says Don Baldosano. “When I went to different provinces, I realized that there’s so much more that I don’t know about our cuisine. Knowing this now, I think it’s my duty to share what I discovered.”

Whereas before, he took inspiration from different parts of the Philippines and molded it into a single dish, now, the young gun focuses on the unsung dishes of the country and injects them with his ingenuity.

To tease the palate, he started the tasting menu with a bunch of one-biters. There was a chewy putong bigas topped with kinuday na taba and caviar, a crunchy piece of toast crowned with creamy kesong puti mousse and green onions, and a pair of fragile savory tartlets: one stuffed with kilawing puso ng saging lubricated with daing butter, and another with Calumpit longganisa and quail egg.

The soup course came as laswa sa hugas bigas. It’s his interpretation of the Ilonggo boiled vegetable soup. His came without actual vegetables, but the sweetness of the squash was apparent in every slurp. It was matched with a piece of sautéed mushroom plucked from his backyard.

Two seafood dishes followed—kulawo in the form of grilled eggplant in a pool of burnt coconut milk capped with crispy shrimp and pahiyas ng Quezon in the form of crackers with binayong hipon and sinaing na alumahan with ginataang kamatis and puffed rice.

Potato lumpia then announced the start of the entrees. There was a slice of asado Pampangueño bathed in a potent tomato sauce and accompanied by baby potatoes and kale, as well as his take on pater sa Quiapo. Instead of being enveloped tightly in a banana leaf, it came unwrapped with Cordillera rice, shredded duck and sayote slices. Completing what was a satisfying number were a palapa spice condiment and mug of warm pampaitum soup.

Gently easing us into desserts was a refreshing scoop of sorbet made from gatas ng kalabaw, buck ice and smoked honey from Subic.

A bite of buko tart then preempted the final course of the night, his pulot sa buri ice cream, returning from a former menu, hidden underneath flat discs of biscocho and surrounded with linga made of roasted sesame and sugar that had been milled together.

When Linamnam opened back in 2019, it was quick to gain recognition, as Baldosano impressed not only with his youth and maturity in cooking, but also for his noble effort to present local ingredients and Filipino cuisine in a different light.

He returns armed with the same arsenal plus the gusto to introduce his customers to a wealth of food discoveries he unearthed on trips to Iloilo, Batangas and Quezon, to name a few.

Last July 31, he announced in Linamnam’s Instagram account that he will start accepting reservations for August. In a span of six hours, he was fully booked until end of September.