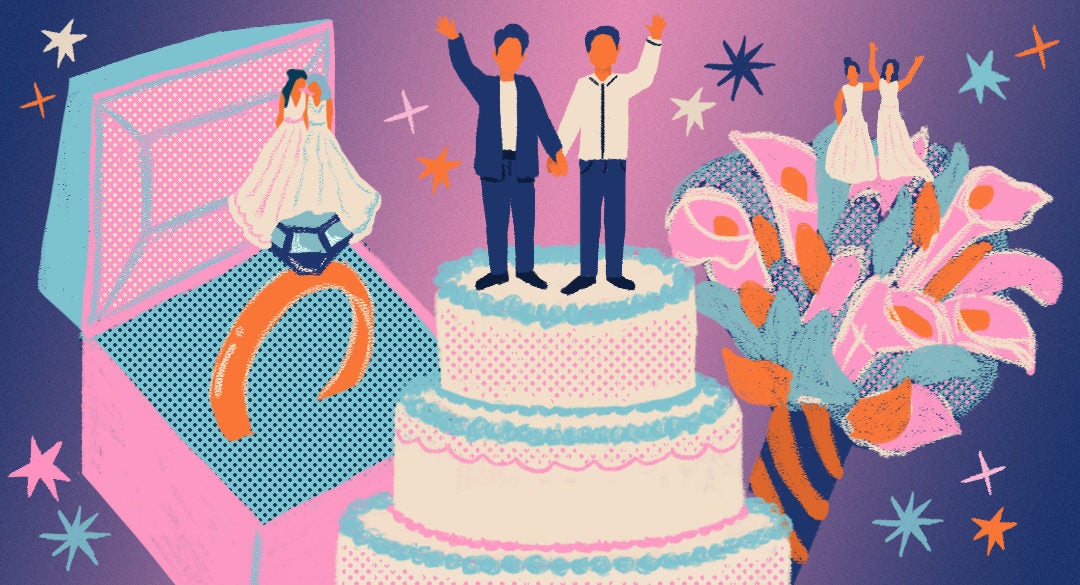 Someday, Gay Marriages Will Become Unnecessary. We Don’t Live in that World Yet

My partner and I celebrated the first year anniversary of our wedding early this month. It reminded me of the stress of planning the intimate event last year (to be honest it was mostly my husband who stressed over it, but don’t tell him that.) We got married in Gibraltar at the height of a global pandemic, with only three friends (a French and Indian gay couple plus a single Spaniard woman) present as witnesses. They had to travel for miles all the way from Barcelona just to cross the border between Spain and Gibraltar, which was British territory. After the wedding, which a kindly officer officiated at the Civil Registration building, our group of five had lunch at a hole-in-the-wall vegan restaurant to celebrate: me and my husband wearing the barongs I brought with me from Manila.

Our country was in a strict lockdown as I packed my bags a month before our wedding, when I left behind the only life that I had known. We chose Gibraltar because most of the world was in a strict lockdown too, and it was the only country that would let me in with my UK visa and had a laxer residency requirement for people getting married. Planning the whole thing in some way felt like scheming to one-up the systems of multiple governments, finding legal loopholes and exceptions that would let me get married. And while I love my husband, it wasn’t fully the reason that we put ourselves through the ordeal of wedding planning. Being Filipino severely restricted the places I could access outside of the Philippines, which posed a tremendous problem to an interracial relationship like ours. We decided that the uncertainty of COVID meant we just couldn’t wait for the Philippines to open up so we could be together: we had to be proactive about our future if we wanted our relationship to survive.

It’s funny when they say that immigrants like me are treated like second-class people in our adopted countries. To a degree, that is true. As an outsider, I sometimes wonder if the rudeness I’d encounter at a shop or on the train was all in my head, or if people were clearly communicating that I wasn’t welcome here. The paranoia can be draining sometimes, so I try to shut it out. The options are to make myself as little as possible and try not to ruffle any feathers, or to make myself bigger than what I really am, claiming my right to be in the space I’m in just like the rest.

It’s funnier to think that being a Filipino gay man is a twofold blow. Being Filipino and being gay makes me a second-class person not just outside the Philippines, but even within my country. A few days ago, I sent a message to the Philippine Embassy in Lisbon, trying to register my marriage in the Philippines. I attached the necessary documents with my email: my and my partner’s passports, our birth certificates, our foreign marriage certificate, the duly accomplished report of marriage form.

They responded perfunctorily: “Same sex marriage is not recognize [sic] under PH Law, we still cannot accommodate request for Report of Marriage at the moment.”

Recently, newly-elected senator Robin Padilla pushed for the legal recognition of same-sex partnerships by filing Senate Bill 449 or the Civil Unions Act. This brings hope to me and countless other queer relationships — hope with reservations, yet hope nonetheless.

But this fight is not exempt from criticism: there are those who’d argue that to fight for marriage equality is to be tone-deaf to the actual needs of the community right now. In the absence of the anti-discrimination law to protect LGBT+ lives from bigotry and prejudice, how far can marriage equality truly bring us? They say our priorities need to be set in order.

Another criticism is how this obsession with marriage is to commit the same mistakes as the cishets. Why do we desperately want to follow the same path, when cishets aren’t exactly the paragons of relationships? (A recent Psychology Today article said that dating opportunities for heterosexual men have diminished because of rising relationship standards from women, which suggests that previous generations of women had to settle with being treated horribly for the sake of propping up the institution — or delusion — of cishet marriages.) Being queer should allow us to forge our own relationship structures, free from the shackles of gender and power imbalance.

LGBT+ people often argue that we only want the State to recognize our relationships because we want to access the benefits that that recognition currently offers: the ability to own properties together, the opportunity to care for our partners when they get sick, and the certainty of bequeathing our possessions to our partners should we die ahead of them. That is why protests from queerphobic religious groups like the CBCP are not only tiresome but bigoted: they can keep their antiquated rituals to themselves, we just want equal protection from the State, thanks very much.

Still, in an ideal world, what can marriage truly offer? In an ideal world, marriage won’t be a prerequisite to get the benefits it currently offers. Perhaps it’s hard to imagine that future yet: a world where material imbalances no longer exist between people, and state-recognized relationships won’t be the safeguard from poverty for most people.

In an ideal world, marriage will just be that campy thing us queers will do: bring in the cute dresses and cheesy vows! Drama! Comedy! The end in itself, and not the means to a larger goal. But we don’t live in that ideal world yet; hence we must fight for marriage equality — until that ideal world comes.