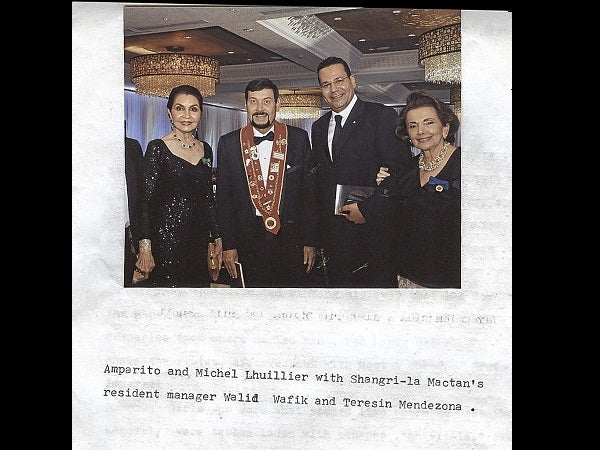 The Cebu chapter of La Chaine des Rotisseurs had its 19th induction gala at the ballroom of the Shangri-La’s Resort in Mactan Island with the theme “Une Nuit Etoilee.” It was a starry night indeed, and breezy too, as guests arrived, welcomed by communications director Mildred Amon and a bevy of her pretty staffers.

They indicated the winding stairway that led down to the party area. Doors parted to reveal a wall of black draperies from where darted manicured hands offering champagne flutes, effervescent with Moet & Chandon Brut Imperial.

Girls who wore what seemed like enormous hoopskirts actually were tables laden with canapés. “Oh-la-la,” said French Consul Michel Lhuillier who heads La Chaine in the Philippines. “Wow!” exclaimed his wife Amparito Llamas Lhuillier, who is the bailli of the Cebu Chapter. “Wow” also described her in her clinging black gown and flashing green tourmalines set with diamonds.

The occasion welcomed new members, called up to a dais for the dubbing ceremonies that had Michel sword in hand, and Amparito slipping in “the chain” mounted on satin. In that august list were the following:

Raised to a higher rank in the pecking order due to their support and loyalty in all club undertakings were a select group that include Marguerita Lhuillier, Annabelle Lu Ym, Mayen Tan, Stella Bernabe, Ricky Dakay, Jurgen Pesch and Carlo Spema.

Following the ceremonies, the 112 guests present were ushered into the main ballroom for a seated dinner. Walls and ceiling were draped with white silk. Those lamps dripping Swarovsky prisms cast added sparkle on the gilt chairs, the satin-draped tables, and the colorful centerpieces whose seedless green grapes were most tempting.

Everyone was given a little booklet that explained how that evening’s gastronomic feat had been designed, culling recipes from the world’s greatest chefs. Thus we learned that the morsels served during the pre-dinner cocktails were by Charlie Trotter of the US, Nobu Matsuhisa of Japan, Massimo Bottura of Italy, Jiles Gouffe and Auguste Escoffier of France.

The booklet also listed the dinner menu, with the corresponding recipes and procedures, as in appetizers of seared duck liver by Nils Henken of Germany; truffles consommer by Paul Bocuse of France; lobster ravioli by Gordon Ramsay of UK; and pan-fried sea bass with scallops by Berthold Buehler of Germany.

After a rum sherbet by Ferran Andria of Spain came the main course—lamb cooked three ways as dictated by Guy Savoy of France. Then followed a cheese platter created by Thomas Keller of the US and a scrumptious chocolate lava cake credited to Johnny Iuzzini, also of the US.

The highlight of the celebration was when certificates of acknowledgment were presented by Michel and Amparito together with the rest of La Chaine’s officers in Cebu—Dr. Nestor Alonso, Teresin Mendezona, Vivina Yrastorza, Al Evangelio, Luke Gagnon and Dave Sharpe.

Heading the team were Mactan Shangri-La’s executive chef Joris Rycken, executive sous chefs Adolfo Lopez and Patrick Buttgereit, Food/Beverage director Mirko Cattini, and his assistants, Gert Beuchel and Ramon Makilan. Crowding up onstage and all over were the 47 jolly members of the kitchen brigade, who were also called up to collect applause.

It was past midnight by now, but that did not mean the end of the party, as guests sauntered around greeting friends, sipping cognac, puffing cigars or just listening to the beautiful music.

Classical masterpieces and contemporary songs arranged in the classical style had been playing since the start of the evening, thanks to an ensemble from the Cebu Symphony. Adding vibrancy with her powerful violin was Princess Ybañez, who, like the rest of the players, had her first lessons in music with the Sala Foundation’s musical development program.

Sorely missed at this event was the resort’s general manager, Joachim Schutte. He had departed for Germany with his wife Christina, who is expecting their first child come June. Schutte will help his family run the boutique hotel they have owned for several generations.

Meanwhile, there is a new general manager at Mactan Shangri-La in the person of Herbert Laupichler-Pichler. All we know for the moment is that he is from Austria and will be properly introduced to the Cebu community after the Easter holidays.