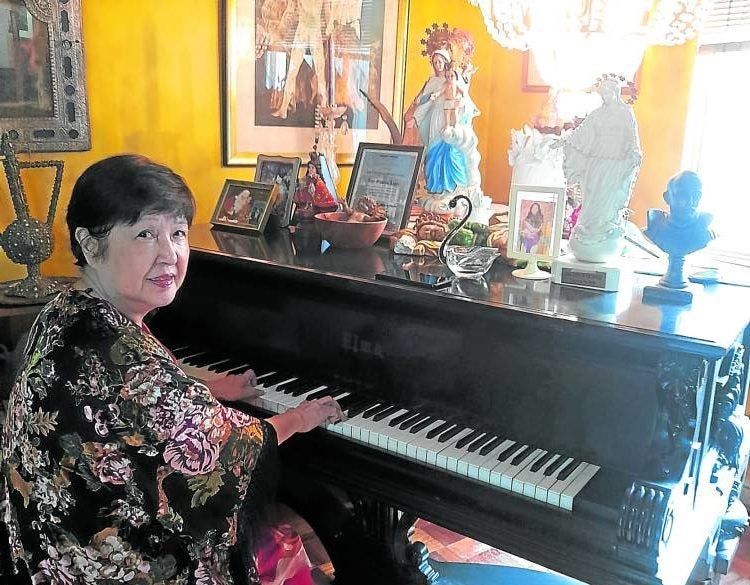 From 2014 to 2020, female victims of abuse, poverty and exploitation at the compound of the Religious of the Good Shepherd would be mesmerized by the gentle riffs of the piano music of artist Amy Gustilo Lopez. Feeling as if they were in a safe haven, they immersed themselves in her lyrical compositions with such titles as “My Lord and My God,” “My Shining Stars” and “Be Still My Soul.” The music allayed their past traumas and uncertainty for the future.

“The Sisters of the Good Shepherd Convent in Quezon City would ask me to conduct a weekly recollection with these girls. I learned how to conduct retreats from Fathers Thomas Green and Ramon Bautista,” says Lopez.

“Basing the recollections on the Scriptures, I would make them go into silence, meditation and relaxation using my music. I gave talks to some 500 women. I saw how their faces changed. Later, they would call me and say the music healed and inspired them. They have since gone to school or put up businesses. They thanked me for a better life. One of them uploaded my music on YouTube as her form of gratitude.”

The “healing pianist” has uploaded her original compositions, which she claims are inspired by the Divine, on Spotify, Apple Music and iTunes.

Lopez was born in Manapla, Negros Occidental, and was raised in Bacolod City, where she learned to play the piano at 6 years old. While studying music at the College of the Holy Spirit, majoring in piano, one of the nuns mentored her to play classical music while praying.

When her two daughters were studying in New York in the early ‘90s, Lopez would look after them for nine months and come home during the holidays. She recalled that while in the Philippines, she started to bleed and her skin turned gray. She was diagnosed with Stage 2 cerebral cancer.

Upon learning of her ailment, friends and relatives did a prayer brigade for over a month until her surgery.

“I prayed earnestly for a longer life because my daughters were still in school,” she says.

The oncologist was surprised at the surgery results. Lopez miraculously survived and was eventually in remission.

Upon returning to New York, she would walk from their apartment on Park Avenue to St. Patrick’s Cathedral to attend mass every day and perform the Adoration of the Blessed Sacrament.

“I became well because I may have a mission. A small voice told me to compose music that would heal wounded souls even though I didn’t know how to compose music. Then as I walked around Central Park, 5th Avenue and Madison Avenue, I heard music,” she says.

Back at the apartment, she would play the piano and jot down notes.

When her daughters graduated, Lopez resettled in the Philippines. Over time, she had created a body of work based on divine inspirations. They were compiled into albums titled “Remembering,” “Offering” and “Thanksgiving.”

Lopez not only picked up music, but she envisioned ballerinas performing her piece. In 2010, during the centenary celebration of St. Theresa’s College in the Philippines, dancers interpreted one of her compositions. “Tears flowed. It was what I had seen,” said Lopez

A friend would play Lopez’s music to an autistic grandchild before she went to sleep. The child eventually learned to manage symptoms effectively, that it seemed as if there was no disorder at all.

“Listening to music enhances brain activity,” says Lopez. Music helps to release endorphins, happy hormones that respond to pain or pressure and help to lower blood pressure and heart rate. “Some said it helped them to recover faster from surgery. Insomniacs would fall asleep. The music pacifies the restless grandchildren.”

Two years ago, a study presented at the American College of Cardiology revealed that 30 minutes a day of listening to music decreased pain and anxiety levels in heart attack survivors.

A New York Times article by Richard Schiffman reports that music is not just a “mood booster.” More research shows that music played in therapy has quantifiable medical benefits. It cites a McGill University study based on 400 research papers that listening to music was better than prescription drugs in lowering anxiety before surgery.

Lopez’s music has been used in tai chi and qi gong sessions to help practitioners focus and relax. Nurture Wellness Village has been playing some of her compositions in the spas.

The pianist’s cousin, Fr. Francis Gustilo, personally delivered one of her albums to Pope Benedict, who wrote her a thank-you letter. The priest sent another album through the Papal Nuncio to Pope Francis. Likewise, the pontiff sent a letter of appreciation.

“Music is a part of my life. I feel very fulfilled offering my music to the glory of God,” says Lopez.