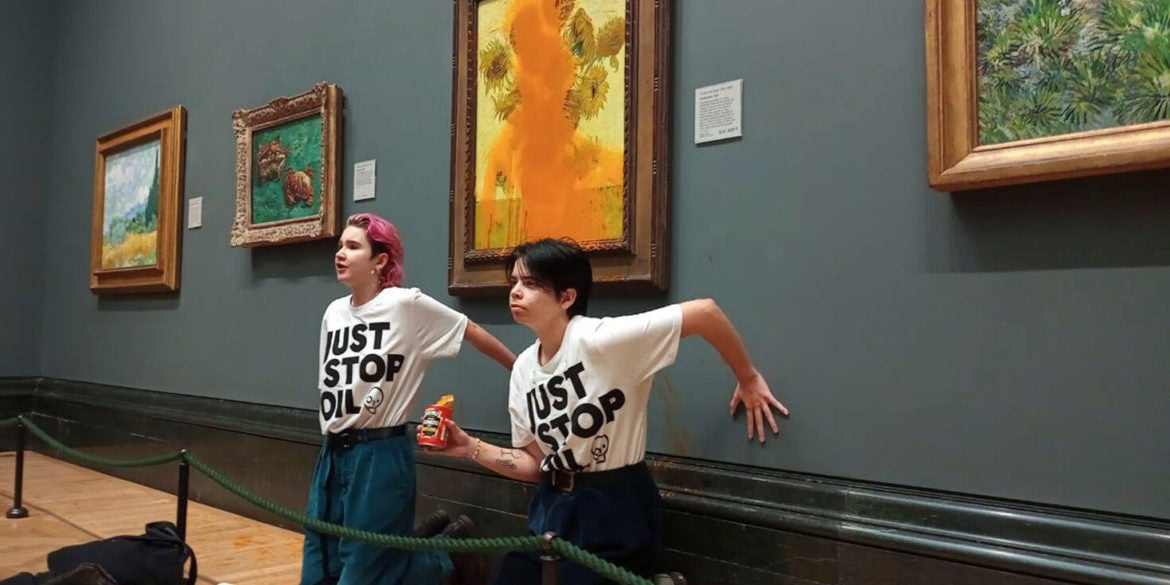 To the shock of unassuming museum-goers, two protesters Phoebe Plummer (21) and Anna Holland (20), members of the environmental group Just Stop Oil, threw the contents of tomato soup all over Van Gogh’s 1888 painting “Sunflowers” at London’s National Gallery on Friday. It is estimated to cost around  $84.2 million.

Activists with @JustStop_Oil have thrown tomato soup on Van Gogh’s Sunflowers at the national Gallery and glued themselves to the wall. pic.twitter.com/M8YP1LPTOU

After the deed, the two were heard asking “What is worth more, art or life?” alluding to the costly price various pieces go for amidst global crises. “Is it worth more than food? More than justice? Are you more concerned about the protection of a painting or the protection of our planet and people?” they ask. “The cost of living crisis is part of the cost of the oil crisis, fuel is unaffordable to millions of cold, hungry families. They can’t even afford to heat a tin of soup.”

Can a protest be identified as a protest if it adheres to the rules, if people approve of them and are not inconvenienced by them? While other methods can be desired, such as not damaging and risking priceless pieces of art, no, that is the precise point of the act. It is to disturb and inform, not to comfort, although its effectiveness can be left up for debate. However, one can argue that Van Gogh does not stand for oil and the degradation of the environment. In fact, a witness explains that it is a “beautiful piece of art, which is the best of humanity.” But conversely, what is the point of preserving the best examples and representations of humanity, if humanity itself is endangered, risked to death, priced and valued less than the works it was made for?

Statement from the National Gallery pic.twitter.com/DuZhTbAvbH

The pair allegedly entered the gallery and took off their jackets to reveal their affiliation with the protest group. They then threw tomato soup at the painting and then glued themselves to the wall beside it. The two have been arrested by the London Metropolitan Police on suspicion of “criminal damage and aggravated trespassing.”

Fortunately, only the frame was slightly damaged. The painting was left undamaged due to it being glazed and was put up back for display in a matter of hours.