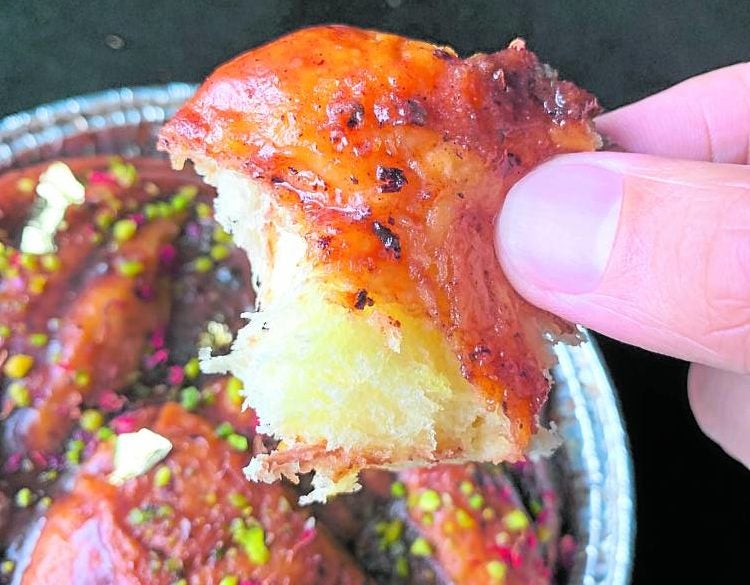 EnsayBabka: Filipino favorite and Jewish staple in one loaf

For 13 years, chef Dennis Hipolito has been developing food products for a commercial pizza brand all across the Asia Pacific. As the senior food innovation and technology manager, he is tasked to develop menu platforms, implement brand standards, develop dough technology and innovate new products to reach broader markets as well as strengthen the loyalty of their current customer base.

During the pandemic, though, he decided to invent one for himself. It’s not the first time he has thought of launching something groundbreaking, but the pastry hybrid he is introducing is one that has sentimental value.

“When I was growing up, my Lola Osang made the most delicious, fluffiest and softest ensaymadas, which she often shared with lucky family members and friends,” says Hipolito. She left him her recipe, which he tweaked and experimented on until he was satisfied. “Creating it required a painstaking and nurturing process. I’ve adjusted the recipe over and over to achieve what I think is the perfect ensaymada.”

While living in Singapore, during a regular exercise routine, the idea of marrying the beloved Filipino pastry with something that’s Jewish in nature came about.

“The weekend trips to New York City started my love affair with babka, a sinful bread filled with moist swirls of chocolate filling. It’s in the city where I explored the different varieties and identified my favorites.”

Called EnsayBabka, the trademarked pastry has a fluffy brioche base, coiled with chocolate, enrobed with an aromatic buttery caramel sauce, and further flavored with a blend of liquors to lend its signature flavor. It’s bigger in size than the usual ensaymada, and doesn’t resemble the loaf shape of the babka either. It’s akin to a massive cinnamon bun, but doesn’t quite taste like one.

“It’s original yet very familiar, and nostalgic, reminiscent of one’s childhood memories.” He adds, “I also think having a platform to feature exciting flavor combinations is important.”

The makeup of the pastry allows him to play and design flavors, ranging from sweet to savory. In fact, even before he launched, he has already thought of possible lines in the near future, including one that combines Filipino and Western favorites.

It has taken Hipolito a full year to get the brand up and running. “I spent about three months working with the creatives to get the packaging to where I envision it to be. Product design took about 2 to 4 months, then it took six months to secure the certificate of registrations for the EnsayBabka trademark.”

But even if it took some time, he strongly feels that his 13-year wait will be worth it, as all the experiences he went through building products for others, he now gets to apply to his own.

And as with the others, the EnsayBabka will be yet another feather to his already decorated cap.