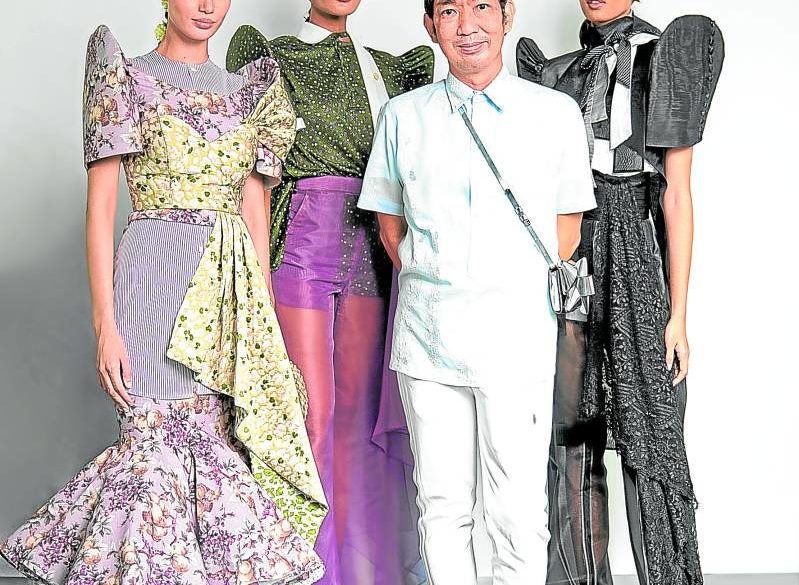 Joey Samson with models wearing his versions of the 'balintawak'

Back to balintawak: Ternocon stretches imagination with ‘rural terno’

At the rooftop of the 32-story The Curve in cosmopolitan Bonifacio Global City in Taguig, the terno’s cousin from the countryside has come a long way from home.

With deep, rhythmic beats interspersed with animal sounds pulsing through the air, the runway lined with gigantic lush greenery was a burst of freshness amid the relative gray of the metropolis beyond—and so were the ensembles that paraded on it at the pasinaya, or opening ceremony, of this year’s terno-mentoring and -making convention, Ternocon.

The brainchild of accomplished scenographer Gino Gonzales and “Love Local” advocate-slash-tycoon Ben Chan, the biennial event that started out as a “Fashioning the Terno” workshop in 2016-2017 has turned into a movement that brought Filipiniana back from the brink of extinction. These days, the terno has made the seemingly lasting leap from costume to custom to commercial.

But the work is not yet done.

Now on its third iteration, Ternocon trains its spotlight on the balintawak, which is “traditionally the less formal, more casual version of the terno” with its signature alampay and tapis in addition to the butterfly sleeves.

“It’s not a balintawak without these components,” said Gonzales, artistic director of Ternocon.

Attempts to modernize the Filipino dress has led designers to do away with more and more elements of the original, but for Gonzales, that should not necessarily be the case.

“I always encourage the designers to add back pieces that have been discarded by their predecessors over the decades. Or reinterpret these pieces and design techniques that have been ignored for so long,” he said. “For instance, the tapis can take on new, contemporary forms. But it will take an intelligent design mind to pull it off successfully.”

He added that the problem is lack of research, either out of stubbornness or laziness.

“[This is] an opportunity for us to increase education and awareness on the variety of the traditional Philippine dress,” said Bench founder and Suyen Corp. chairperson Chan, who had always wanted to keep the tradition of the terno “alive, thriving and relevant to the times.”

With the threat of the pandemic still looming over the country, Chan said they felt it was more relevant to turn their attention to the “more rural than urban, less ostentatious” Filipiniana garment.

But “country” does not automatically mean rustic, as evidenced by the pieces showcased last week by Ternocon mentors and past winners, deftly demonstrating the expansive range of possibilities for the traditional local casual wear.

Inventive reinterpretations marked the opening presentation. The looks presented by Ternocon 2020 winners ranged from classic to edgy to dystopian, with surprising details standing in for the features that distinguish the balintawak from the terno: the malong-like gathering of fabric extending from the shoulder to the skirt of bronze medalist Dinnes Obusan’s dress, the protrusions from both the bandeau and the skirt in silver medalist Jaggy Glarino’s preppy punk look, and gold medalist Hannah Adrias’ version in distressed cheesecloth in her top-and-trouser piece.

In Chito Vijandre and Ricky Toledo’s opulent gown, the tapis takes on the form of an embroidered apron; in lieu of an alampay, various neck accoutrements (neckties, bowties, cravats) hang from one side of Joey Samson’s tailored piece; a flower-petal peplum blooms over chic slacks as the tapis in Dennis Lustico’s reimagining of the balintawak.

With ingenious designs from mentors like these, there is much to look forward to from the new set of contestants at this year’s Ternocon 3.