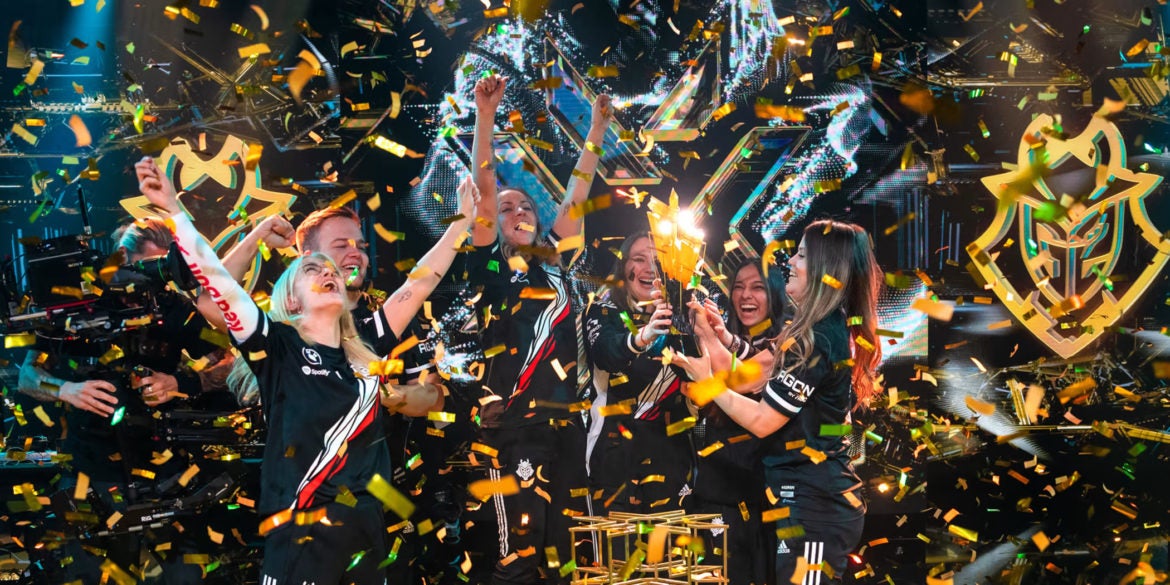 The 2022 Valorant Game Changers Championship set in Berlin, Germany just recently ended. G2 Gozen took home the crown and won over Shopify Rebellion 3-2, in a nail-biter of a series that went the distance with neither team giving an inch until the very end.

The European team put on a show, going undefeated in the entire run against some of the best female talents the world had to offer. The tournament included teams from six different regions for a total of eight participating teams, namely; Cloud9 White (NA), Shopify Rebellion (NA), Guild X (EMEA), G2 Gozen (EMEA), Team Liquid (Brazil), KRÜ Esports (LATAM), FENNEL HOTELAVA (East Asia), and X10 Sapphire (APAC). On their way to the finals, G2 squared off against X10, C9, and Team Liquid which they all handily dispatched. At the biggest stage, however, things did not start off well as Shopify Rebellion started out guns-blazing and had them on their heels and up against the wall down 0-2. On their last legs and in a display of unmatched talent, resilience, and a couple of out-of-this-world plays and clutches, they managed to rally back from the deficit and reverse sweep their way onto becoming the world champions for the format’s first-ever LAN tournament.

Female Valorant talent in the spotlight

A rising star in the realm of FPS shooters, Riot Games’ Valorant announced last year the start of their Game Changers format, a competitive scene dedicated to women and other marginalized genders to provide them with the platform to compete in a professional environment.

“VCT Game Changers is a new program which will supplement the competitive season by creating new opportunities and exposure for women and other marginalized genders within VALORANT esports. The competitive VALORANT community is both diverse and incredibly global, and our esport should reflect that. Through Game Changers, we hope to build towards a VALORANT Champions Tour that is more inclusive and representative of our community,” shares Whalen “MAGUS” Rozelle, Senior Director of Esports for Valorant.

In the end, Esports, as for all competitive scenes is a business where success is measured in wins and trophies. It is a ruthless industry where players will be celebrated one day, and immediately scrutinized and even replaced the next. With such tight competition, it is perfectly understandable that teams would be selecting only the best of the best to fill their rosters to maximize their chances for a podium finish. And most of the time, unfortunately for women, that opportunity is given typically to males. After all, they’ve been in the game for far longer, and it would be foolish to compromise success for minimal social action—although, there really isn’t any biological evidence to prove that men are better in video games compared to women—this isn’t like basketball folks.

Fortunately, women’s Valorant seems to be heading in the right direction as assisted by the increased visibility and exposure brought about by Game Changers. Esports Charts reports that it has become the most-watched tournament for female esports with over 5 million hours of total watch time. It is also ranked second for peak viewership with almost 240,000, which is behind the Mobile Legends: Bang Bang Women’s Invitational which peaked at 392,405 viewers. Aiding in the effort are Twitch watch parties which were hosted by big names in the scene such as Tarik and TenZ.

This is good and all, but frankly, and I’m sure even those part of the all-female teams would attest to this, but having a separate league only affirms the preconception that men are simply superior in the game. After all, if they’re good enough, why aren’t they playing against them? The end goal will always be a mixed competitive scene where men and women will be able to freely compete against one another without it being viewed as some sort of social awareness action—it would simply be normal.

But unfortunately, we’re not there yet—there’s a lot to improve on before that dream becomes a reality. As Anna Donlon, the executive producer of Valorant states, “Competing in games as a woman can be a daunting task.” And we’ve seen that time and time again. In more casual servers, various men would throw the match and harass a female player as soon as they heard her voice. During competitive matches on stream, viewers would make remarks, asking these women to “go back to the kitchen,” among many other insults. For example, during the Game Changers tourney, numerous demeaning comments were directed at Cloud9 White’s Bob Tran, who is a transgender woman. Affected by the intentional misgendering and flat-out hate, Tran shared via Twitter that she struggled to ignore it, at one point believing she deserved the hate.

I don’t know if I should even be sharing this publicly but the hate I was getting during Berlin was unbelievably hurtful and for the first time, I struggled to ignore it and even felt like I deserved it. I try my best to control my emotions but at the end of the day, I’m human.

Aside from this, other female members of the gaming community shared their experiences on the treatment they’ve encountered, shedding much-needed light on the full gravity of the situation.

Pokimane, one of the biggest personalities on the Twitch streaming platform shared, “I find my biggest issue is I don’t like to talk too much in-game (ppl get weird about me being a girl / being poki), and that doesn’t work with being a sova main, and I don’t have a dependable duo to comm on my behalf.”

Former Counter-Strike: Global Offensive pro Stephanie “missharvey” Harvey said “Toxicity is another factor. Men can be really aggressive when they play against women, something that also happens in chess. It’s not just a gaming problem. It’s really a competitive and societal problem. When males play women in anything they can become extremely aggressive and take a lot of risks. Even irrational ones, which can be really heavy to play against.”

All of this is not to divert all the blame for the lack of a female presence at the highest levels of the game simply to male oppression—there is a difference in skill for sure. For one, Cloud9 White, the number one Game Changers team in Northern America, competed in the open qualifier for the VCT Champions Tour Stage 3: Challengers 2, the main competitive scene for Valorant which includes some of the best pro players in the world. Unfortunately, however, they lost in the round of 64 to Brimstone Gaming, an unofficial, unsigned roster. This is a bad look no matter how you view it. To an extent, it did somewhat solidify the notion that they just aren’t good enough. But, it also shows the lack of experience and training that hasn’t been afforded to them. Aside from not being able to scrimmage against some of the top teams, being coddled in a separate tournament has prevented them from gaining much-needed experience that they can get from consistently playing at higher levels of competition. But Game Changers really has been a small step in the right direction. It may take a while but hopefully, the time comes when women can freely enter the professional scene without any resistance, that it’s just a normal everyday occurrence. If anything, gaming is the perfect place for that—it’s a level playing field after all with no physical barriers or limitations—the sky is the limit.