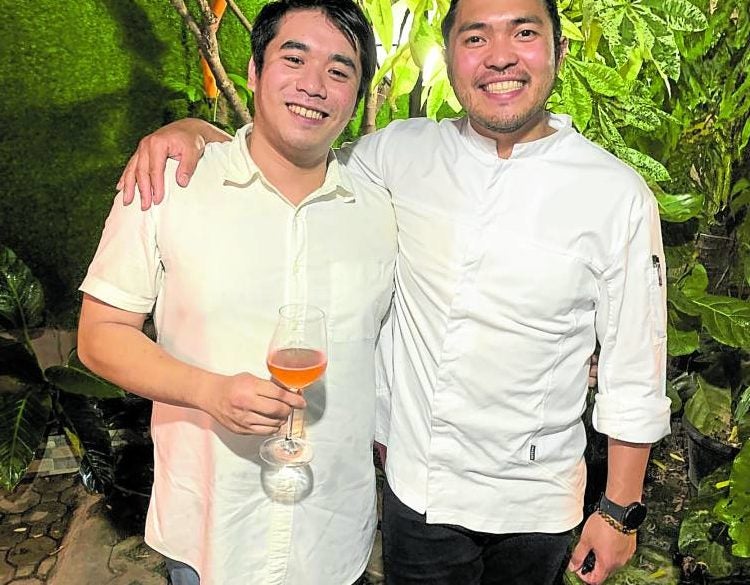 It’s a dinner that was planned months ahead. Yet, the menu only materialized a few hours before it was served.

“We worked on the fly and tried to feel each other out,” says Don Baldosano of Linamnam, one of Manila’s busiest and sought after private dining.

“We just wanted to do it for fun,” adds Jolo Morales, who was on a 12-day holiday vacation from his kitchen work at Brae, one of Australia’s highly regarded and decorated restaurants.

Perhaps the dish that best represented the kind of unrehearsed play that transpired that night was the one called Farm. Morales made a latik purée, then they added whatever the farmer brought them that afternoon to complete the course. “We treated the greens in a such a way that there would be different textures and ways of cooking,” says Baldosano. “So I cooked the vegetables in high heat and left some raw. Then last minute, I saw some alimasag fat so I said, okay, let’s add another layer to the dish. I made a dressing out of that.”

The chefs have known each other for four years now, and though they have cooked dishes for Toyo Eatery (that’s where they met) as well as developed recipes for brands they consulted for, the two have never really worked together to produce a meal that combined their individual capacities and philosophies.“Don has a good aura and I love connecting with people like him who has lots of energy and loves moving forward,” says Morales.

They would often exchange random and crazy ideas and more often than not, get varying ones, since their backgrounds are different. These were learning conversations, not just about the craft but about each other, too.

This continued long after Morales moved to Melbourne, where he got to work in hatted restaurants and even joined the San Pellegrino Young Chef Academy, a cooking competition in which he won. In 2021, his dish named Analogy, composed of roasted lechon pork belly, bagoong, pandan rice cracker, latik caramel and tamarind powder bested others, making him the Pacific region representative.

Baldosano, on the other hand, earned his merit by opening his own restaurant in Parañaque and presenting a progressive Filipino menu unlike any other. It didn’t take long before Linamnam got in the radar of many people and became a hot spot.

Even if both of them are busy tending to their own careers, they continue to find time every month to engage in hours-long calls to talk about their latest kitchen experiments, cookbook recommendations and culinary discoveries. And when Morales was allowed to take a work leave for Christmas, the two knew that it was time to finally put everything they’ve discussed to plate.

They had a list of the items they wanted to champion per course, but as expected, a good number of them saw iterations in the process. Both went to Suki Market to purchase ducks and seafood, Quiapo for sakurab and palapa, and then to a dampa in Baclaran to find whatever on a whim. From there, they proceeded to the Linamnam kitchen to start working on their dishes.

The opener was served on toothbrushes smeared with a latik paste, coagulated mixture of coconuts, and grated burnt coconut; followed by aged lapu-lapu in between crispy lumpia wrapper dabbed with wagyu fat and baked to a bronze. It was crowned with pipinito and edible flowers.

There was a bar of batwan ice candy that made guests pucker up and awakened their senses, as well as sigarilyas dotted with patani beans cooked in coconut and turmeric and amplified with a palapa emulsion; followed by four seafood numbers: a mound of crab meat studded with pili nuts and puffed rice sitting on a pool of buttery broth seasoned by clams and caramelized bangus; squid two ways covered by katuray flowers; aged pompano wrapped in torched adlaw leaf and drenched in a chicken feet and wing jus; and oysters that have been lightly kissed by charcoal blanketed by wagyu fat and cream and topped with alugbati leaves.

The farm, which put the spotlight on the fresh leaves coming from Den and Jean’s Natural Farm, was what the chefs considered to be the most spontaneous thing they did, while the wild honey-roasted duck was the most personal and sentimental for them as it traced its roots to a Camarines Sur trip they had.

“At Caramoan, we saw a guy who kept on chewing on nga-nga and spitting it. His mouth turned red because of it,” remembers Baldosano. “Since then, Jolo has been bugging me to do a dish inspired by it.”

That memory was immortalized by shredded duck meat tucked underneath thick porridge and grilled sakurab, on a base of betel leaf. As a throwback to their experience, tobacco was torched table side for a smoky aroma and nicotine buzz.

“Sobrang ganda how we managed to interpret it,” says Morales. “It was the best dish for us. It was our favorite.”

The holiday break may be over but their constant exchange of ideas won’t. The monthly calls will continue in preparation for next year’s collaboration dinner, even if they themselves know that things will still change last minute.