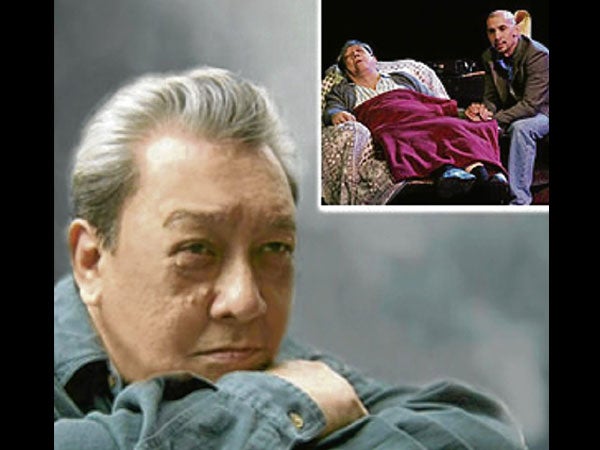 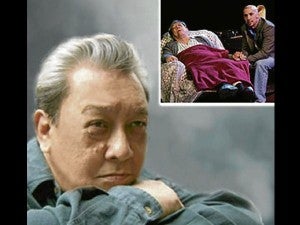 For actor-director José Mari Avellana, who died of aneurysm Sunday, it was an all-too-brief Indian summer. But while it lasted, it was a dazzling, sometimes heart-stopping, reminder of all the brilliance, substance and drama that must have attended the high noon of the man’s career in Philippine theater and the arts.

In January 2008, 15 years after having done his last play, Avellana returned to the stage in Repertory Philippines’ production of “Tuesdays With Morrie,” based on the Mitch Albom bestseller. His turn as the dying but unbowed professor Morrie Schwartz, opposite Bart Guingona as the Albom alter-ego, occasioned wide acclaim, culminating in his winning the first-ever Gawad Buhay! Best Actor honors the next year, given by the theater organization Philstage.

“Before this production,” I wrote in this paper, “few young theatergoers had heard of the august actor, the scion of two National Artists for Theater—Lamberto Avellana and Daisy Hontiveros-Avellana—and himself a fixture of local stages in decades past.

“‘Tuesdays With Morrie’ was to be Avellana’s first foray into theater in 15 years. It was a gruelling part, requiring the actor to deteriorate, within two hours, in front of the audience’s eyes as Schwartz succumbed to Lou Gehrig’s disease.

“Avellana had to be sickly but inspirational—a prefabricated occasion for any lesser actor to make a treacly ham of himself. Avellana, instead, employed the potent resources at his disposal—the rust-proof acting skills, but also the wisdom of his advanced years, the gravitas he wore with wry, graceful lightness—to sketch a rigorous, unsentimental portrait of a man unfazed by the dying of the light.”

Over at the Philippine Star, writer and teacher Exie Abola was moved to rhapsodize: “By so completely embodying Morrie, Avellana makes what is otherwise prosaic speech acceptable as the epigrammatic poetry of the quotidian.” 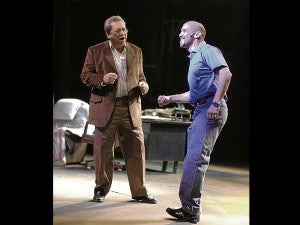 As comebacks went, it was a spectacular one. But, unknown to many, it was fraught with peril. Avellana was already in fragile health at this time, but his return to the boards seemed to energize him, and with “Morrie’s” success, he and Guingona found themselves on an extended run.

At a performance in Alabang that May, the unthinkable happened. As Guingona recalled (in a piece he wrote for the Inquirer), Avellana “collapsed onstage just as he was about to take his curtain call. In full view of a full house, I ran to where he lay and found him stiff as a board, eyes glazed and defocused. I was horrified… When I turned to the audience to call for a doctor in the house (a phrase I never dreamed I’d use one day; I mean how clichéd is that?) I was faced with an uncomprehending audience, glued to their seats. I later learned that many had thought it was all part of the show.”

It turned out Avellana had, earlier that week, sprained his ankle while on location shoot in a mountainous area for a foreign film production where he worked as assistant director, production designer and scriptwriter. He was taking over-the-counter anti-inflammatory drugs, not knowing it would aggravate his stomach ulcers.

“Two minutes before the show started, Mari was feeling faint and nauseous but just kept it to himself,” Guingona recalled. Avellana went through the two-hour show, progressively getting weaker—as his character did—but this time for real as the painkiller had begun to cause massive bleeding in his stomach.

“But Mari finished the show! In extreme pain and with a possibly fatal condition, he actually forced himself to make it through to the end!” Guingona could only marvel afterwards.

Avellana was rushed to the hospital and thankfully recovered. Even while still in bed, he made light of his whole ordeal—“In a cracked basso profundo he joked [to Guingona] ‘Wasn’t that a great publicity stunt?”—and was back to work soon after. 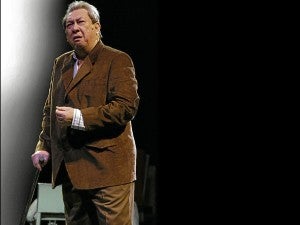 The next year, he was back at Rep, directing a revival of the Nick Joaquin warhorse, “A Portrait of the Artist as Filipino.” The production was, in many ways, both a homecoming and a family affair. The streamlined text was the work of his mother and father, and had formed the basis of the 1965 film that Lamberto had directed, starring Daisy as Candida and Naty Crame Rogers as Paula. The Rep play not only took after the film’s template, it also used the musical score by another Avellana—Lamberto Jr., José Mari’s brother.

At the 2nd Gawad Buhay!, the revival ran off with eight nominations, including Best Play, Best Director and Best Musical Design for Lamberto Jr., as well as acting citations for Ana Abad Santos and Liesl Batucan as the Marasigan sisters, and Dido Dela Paz as Don Perico (who would win Best Featured Actor in a Play).

His scary brush with death onstage was but the most dramatic demonstration of Avellana’s extraordinary commitment to his theater work, which had by now stretched more than five decades. He was thrust into the stage in his teens, playing various roles in his parents’ Barangay Theater Guild productions, then eventually flitting to various other theater groups. At BTG, he was Tom Wingfield in “The Glass Menagerie,” Jamie Tyrone in “Long Day’s Journey Into Night.” At Rep, he was Dr. Dysart in “Equus.” With Teatro Pilipino, he played Abdalap in “Orosman at Zafira” and the title role in “Cyrano de Bergerac.” He was also in Filipino adaptations of “A Streetcar Named Desire” and “Wait Until Dark.”

On film, he was last seen in the 2009 Cinemalaya entry “Colorum,” for which he nabbed a Best Supporting Actor nomination in the 2010 Gawad Urian. He was also a writer, director, production designer, photographer, radio broadcaster—the kind of Renaissance man that had all but vanished by the time he burned the stage once again, decades later, as Morrie Schwartz.

He possessed another Old World trait: graciousness. Before his triumph at the first Philstage awards night, we had never met Mr. Avellana, but when our review of his performance in “Tuesdays With Morrie” came out, he staggered us with an e-mail. “Thank you very much for that ‘shot in the arm’ you gave us grizzly bears,” he wrote. “Your generosity has inspired me to do more work on the boards.”

Later that year, when we picked him as Best Actor in a Play (a cinch, really) for this paper’s year-end theater round-up, out came another e-mail: “I am speechless. I am humbled. I am inspired. Thank you very much for including me. You touched a warm spot in this grizzly’s heart.”

And when we posted in our blog a video clip of his brief but warm and classy acceptance speech at the Gawad Buhay!, he was his usual generous, self-deprecating self in our mailbox: “I was thrilled to see that you posted my little acceptance speech, because I do not remember what on earth I said and was worried that I had made an ass of myself. Happily it was short and not as rambling as I thought.”

Generosity—clearly the same spirit that goaded Avellana to finish the show, to honor the audience and his art, in the face of excruciating odds, even of near-death itself. Or as Guingona put it, “You are generous beyond imagination. You almost died to entertain us. The least we can say is bravo!”

Avellana passed away on Sunday, June 26, at Cardinal Santos Memorial Medical Center. He was 70. Grizzly, Sir—bravo.