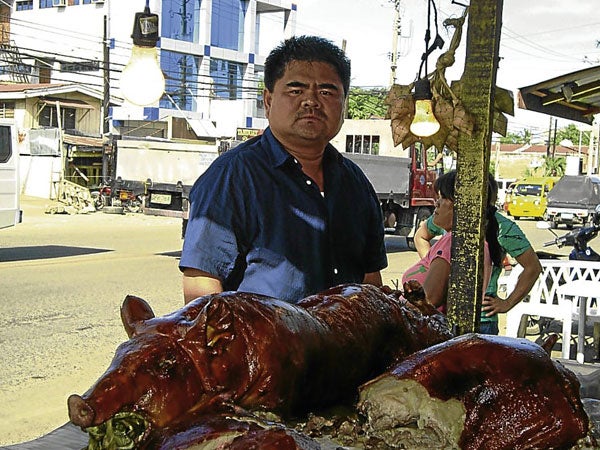 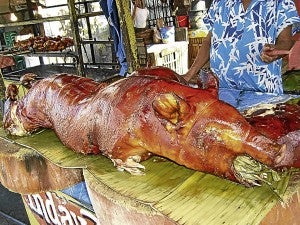 When I think of the Queen City of the South, its lechon is always top of mind.

Which is why when I get the chance to talk to my favorite Cebuano chef, Bricks Nemenzo of BelCris foods, we end up talking about Cebu lechon.

Like many Cebuanos, he knows his lechon. When I asked him if he knew how lechon came to be, he quipped, “Di mo alam?!”

According to Nemenzo, “Sa China daw, may nasunog na barn. All animals were able to escape except the pigs. The barn owner smelled something good from the ruins. He then saw the pigs, roasted in the fire, with skins crisp and golden. When he tasted it, not only was it aromatic, it was also delicious. So when the barn owner wanted ‘lechon,’ he built a small barn and set it on fire.”

“The practice became too costly that eventually it came down to roasting pigs over an open fire… And with the many Chinese herbs and spices available to him, the barn owner found himself improving and enhancing his lechon.”

“At yan ang isang sikreto ng Cebu lechon—apoy!” adds Nemenzo. “People think it is roasted over charcoal. No, it is not. If you want crispy lechon, don’t use coals, use fire.”

We use coconut leaf, the stiff rib in the center of each leaf—dried and used to make the fire for roasting. Another factor is perfect timing—required to make perfect lechon.”

Former Malacañang executive chef Babes Austria (now executive chef of Taal Vista Hotel) was sent on a mission to Cebu to master the art of making the perfect lechon. Austria and Nemenzo went to observe and learn as much as they could on the subject.

Austria noticed the use of Camel soy sauce (Camel has slight hints of sweetness), available only in Cebu, rubbed inside the carcass and on the skin, with native spring onions that grow wild in Cebu.

“I went to Bangkerohan, the old Cebu market near Sto. Niño Cathedral, at 5 a.m. just to observe the bagsakan. The freshly harvested wild spring onions were in abundance, wrapped in banana leaves, probably around 10 kilos per bundle. The spring onion we have here in Manila is a small version compared to Cebu’s. It is in between onion leeks and scallions in the US.” “Maraming sikat na lechon, but the most popular are those from Talisay City, Cebu. Many lechon makers in Manila are originally from Talisay. It is a seaside city and it became popular because they used to sell it to the weekend beach-goers,” says Nemenzo.

Austria adds: “Talisay is where the best Lechon de Cebu came from—since the time of Magellan, according to the locals. From corner to corner, the community was roasting lechon, all reserved for either hotels or for Manila [customers].

“It is the saltiness from the rock salt, the delicate texture, the pungent flavor plus the aroma of Visayan spring onions and native peppercorns that set the Cebuano lechon apart.”

Austria was able to put her knowledge to good use by applying all that she learned when she served her version of the iconic Cebu lechon to the former US First Lady and now Secretary of State Hillary Clinton at a Malacañang Palace cocktails hosted by then President Gloria Macapagal-Arroyo.

Nemenzo considers the stuffing as the roast’s most prized component. Eating the lechon with the leeks/spring onions is the best. They’re also the hardest to ask for. The lechoneros know how precious these are, so they ration them out.

1 can pineapple chunks, medium size (for flavor plus helps soften the meat)

Stuff ingredients inside the belly.

Rub pig with soy sauce and leave to dry for 45 minutes to an hour. 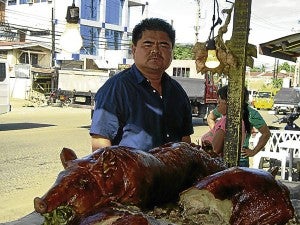 I cannot wait to drive up to Tagaytay’s Taal Vista Hotel to visit Chef Babes. Her quest to study the various lechon of the Philippines has led her to create a lechon buffet done four ways—Tagalog, Butuan, Cotabato and Cebu. For info on Chef Babes’ lechon buffet, call 046-4131000.

To my dearest Bricks and Babes, thanks so much for sharing your knowledge. I look forward to more tasty times and mouth-watering conversations.