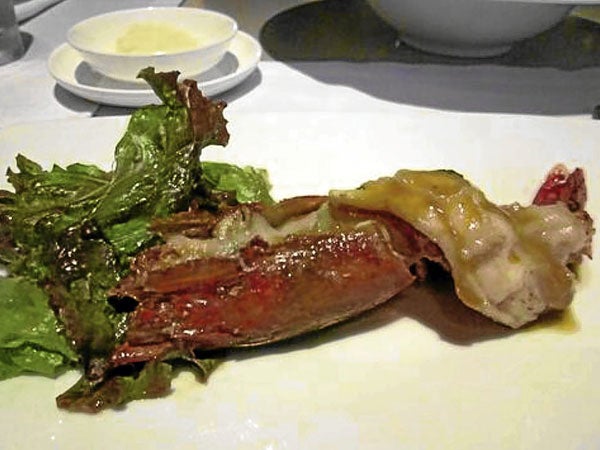 The look like pinecones that just came out of a bonfire. With their rough texture, bumpy appearance and irregular shape, they’d probably be considered the ugly duckling in the mushroom family.

Yet they’re the most prized of fungi, coveted by chefs and desired by gourmets. Found only during a short season (usually between late fall and early winter), they’re hunted by sniffing pigs and dug out from the soil beneath the roots of oak and hazelnut trees.

So valuable are they that sometimes auctions are held to sell them to the highest bidders.

Several years ago, one would never have seen them in the Philippines. Today, thanks to the booming haute cuisine (and to more permissive importation laws), truffles occasionally make an appearance in Manila’s high-end restaurants.

Come July 1, with the arrival of a new shipment, truffles will become even more prominent in Masseto’s menu, says executive chef Tippi Tambunting.

Suffice it to say that truffles can do to a dish what a diamond can do to a woman’s appearance. A plain omelet, a roasted chicken, or a baked potato can become elevated to the realm of gastronomic heaven when dusted with a few shavings of truffle. Even a soufflé, already puffy in appearance and in reputation, can benefit from having a few grams of truffles tucked in.

At Masseto, chef Tippi, a graduate of Culinary Institute of America in Hyde Park, New York, makes the most of these fabled mushrooms. In one appetizer, thinly sliced truffles lean on an egg that’s been baked to a soft-boiled consistency. The earthy aroma of the truffles permeates the dish, perking the appetite even before the first spoonful is savored. It also serves as a kind of teaser; if this is the appetizer, what would the next dish be like?

Since we were having a degustation lunch, the next dish turned out to be another starter: Pecorino ravioli with mushrooms and truffle sauce. This was one OMG moment.

My companion Maja Olivares Co and I couldn’t stop exclaiming as we relished the ravioli filled with a mousse of Pecorino cheese, spooned with a fragrant sauce that had a very emphatic truffle flavor. It was “mmm… mmmm… mmmmm” from the very first bite to the last. If we had said “mmmm” some more, we would have sounded like a pair of cows mooing in the meadows.

Although that dish was hard to surpass, the next one was a worthy successor: taglioni, long ribbons of thin noodles, drizzled with olive oil, crowned with generous slices of black truffles. Because chef Tippi didn’t embellish this dish too much, we could savor the truffles in their purest form against the neutral taste of the noodles.

Nutty, earthy and tasting somewhat woodsy, it was like food conjured by mythical creatures of the forests. Eating it was like eating a mysterious secret of the soil, or something magical, or both.

As outstanding as the truffle dishes have been, chef Tippi made sure we also tasted other dishes in her repertoire that were inspired by her travels in Europe. We had a perfectly risen cheese soufflé with ripples of toasty brown swirling on its crust.

As good as it was to look at, the crust collapsed into heaps of flavor with the pouring of a sauce of Comté cheese, an aged French cheese made from unpasteurized cow’s milk.

Nevertheless, the crust retained some crunch, providing a contrast in texture to the airy, soft cheese filling.

We also had a prawn dish smothered with an onion purée and a reduction of prawn broth that, said chef Tippi, had been simmered for six long hours to concentrate its flavor.

A dish of chicken marinated in garlic, thyme and rosemary was topped with jamon Serrano, an air-dried mature, mountain ham from Spain. The ham had been fried to a crisp, making it taste like high-end bacon. Likewise the skin of the chicken was very crisp, and was made more flavorful by the accompanying reduction of sherry and cream.

Between all these delicious bites, Maja kept raving over the dessert of Grand Marnier soufflé, which she said was her favorite of all. When finally it was served, I understood why. The golden crust that crowned the top of the dish hid a creamy custard of egg whites that was fluffy, light and, as Maja said, was “so fino.”

Like a real star, this dessert called for some drama, aptly provided by the ceremonious pouring of Grand Marnier and vanilla sauce. Though we had both opted not to have wine with our meal, Maja and I still had our taste of liqueur with the very pronounced flavor of the Grand Marnier in the soufflé.

We tried two other desserts, too: homemade vanilla ice cream with chestnut crêpe and chocolate cake with caramel sauce, paired with honey ice cream. Both were satisfying, and perhaps if we hadn’t had the Grand Marnier soufflé, we would have swooned over these, too. But as it was, nothing seemed to top the Grand Marnier soufflé so everything after that was anticlimactic.

The thought of those truffles, however, still linger in my mind. “There’s a new shipment coming in on July 1,” chef Tippi kept saying excitedly. The new supply would certainly boost their presence on the menu, but Tippi says they can only serve the truffle dishes as long as their supply lasts.

Along with the new cache of truffles, there would also be cèpes, wild mushrooms from France, which, though not as rare as their truffle cousin, have merits and flavors of their own. Already I can imagine what delicious dishes Tippi would make of them.