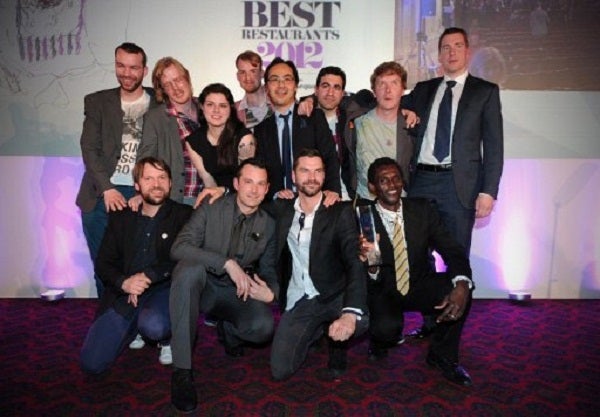 Denmark’s Noma restaurant has been named the best in the world for a third year running in an international survey that also gave top rankings to establishments in Spain, Brazil andItaly.

The magazine called Noma’s chef Rene Redzepi “the standard bearer for the New Nordic movement,” citing his attention to detail and innovative approach.

He also won respect for his use of local and seasonal ingredients foraged from the seashore or the forest.

“We are a temple of deliciousness,” Redzepi told Agence France-Presse after picking up his award.

“We want to create deliciousness and we want to give people three, four or five hours where they come out of reality and become happier,” he added.

Noma seized the top spot in 2010 from Spain’s El Bulli, which has since closed. But Spanish restaurants held onto the second and third spots on the global dining list this year.

El Celler de Can Roca in Girona, run by three brothers and known for its dishes based on perfumes, came in second, while third place — plus the Chefs’ Choice award — went again to Mugaritz inSan Sebastian, despite a devastating fire two years ago.

Brazil’s D.O.M., run by former DJ Alex Atala, made fourth place — up from seventh — after achieving growing popularity with its fresh, confident use of Brazilian ingredients such as acai and the fruit of the pupunha palm.

Britain’s Heston Blumenthal pulled off a double entry, with his new restaurant Dinner going straight in at ninth place while existing venue The Fat Duck came 13th in the awards, presented atLondon’s Guildhall on Monday night.

The list was dominated by European restaurants, but six Asian venues won places, with Iggy’s at the Hilton in Singapore the highest ranked at 26th.

“The Asian contingent has secured its position on the gastronomic map,” organizers said.

Four South American restaurants made the cut, plus 10 from the United States, where Thomas Keller — whose Per Se in New York came in sixth — won a lifetime achievement award after his venues made the list for all 10 years.

The One to Watch award went to La Grenouillere in northern France, with young chef Alexandre Gauthier credited with bringing a fresh approach to the venue’s nearly 100-year history of cuisine specialising in frogs’ legs.