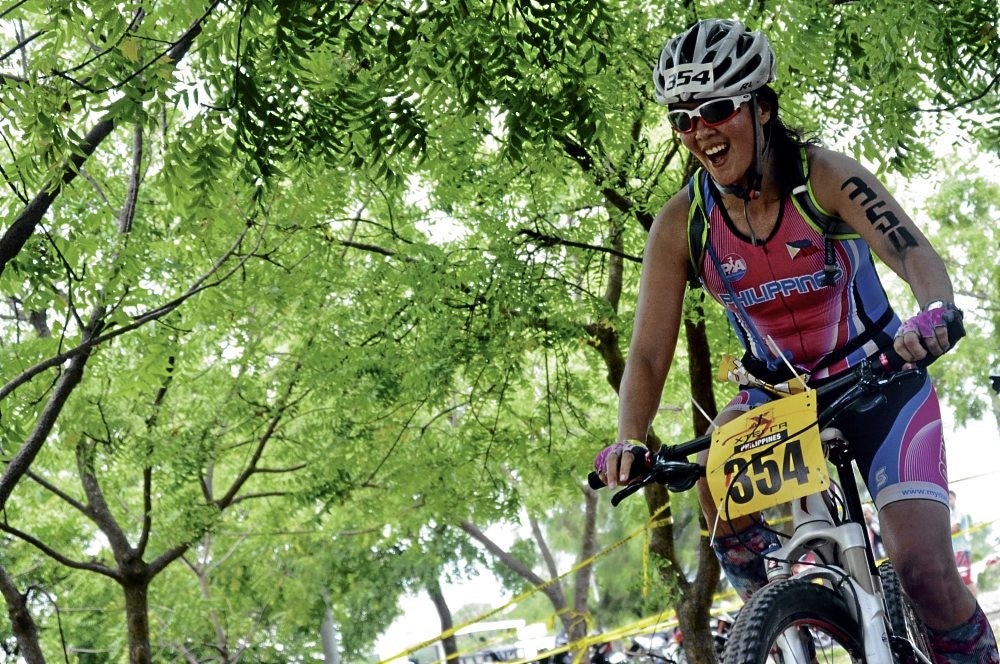 CAYETANO at the recent Vaseline Xterra in Cebu where she finished with a time of 4:35:33, placing second in the 45- to 49-year-old category PHOTOS BY NELSON MATAWARAN

Eat muffins to get healthy, says this senator and athlete

When Senator Pia Cayetano is not sitting at the impeachment trial or crusading for the Reproductive Health Bill, she advocates healthy eating and exercise.

“I Google on calories. I had intended to take up an online course on nutrition, were it not for the impeachment,” she said.

Lately, she’s been getting inquiries from her political circle on how the two lawyers on her staff slimmed down.  As chief of staff lawyer Deegee Anastacio and lawyer Joei Gaña were embarking on a cookie diet, a program consisting of cookies to suppress hunger and cutting down carbohydrates and fats, Cayetano put them on her sliced muffin diet instead.

Much has been written about the senator’s passion for triathlon, but unknown to many, she is equally enthusiastic about nutrition and baking, both of which have been channeled into her new restaurant, Slice, at Bonifacio High Street Central.

“My two lawyers are like me, we love sweets,” she said. Even the senators love to snack on her muffins between tough deliberations.

Cayetano explained that while most muffins are packed with flour and sugar, her recipe is rich in natural fiber. “Instead of ingesting starch, which has low nutritional value, half of the consistency would be fruit.

We did so many taste tests and lowered the sugar. Yet, we had to make it palatable for the average person. If you make it too healthy, people don’t eat it. They’re always looking for sweetness. I lowered the fat and sugar contents and try to fill it the way I eat—with fruits and nuts.  They’re not necessarily lower in calories; they’re heavier because of the ingredients.”

Cayetano learned to bake from her maternal grandmother Alvenia Schramm. Her muffins come in the regular bakery size and the petite versions for the weight-watchers.

The keys to success for the Slice Muffin Diet program are to control the hunger and to boost the metabolism by increasing physical activity. Anastacio and Gaña ate three petite muffins a day between meals.  The muffins enabled them to maintain an even blood sugar level and feel satiated.

“The healthiest is the Morning Glory muffin, which is carrot- and apple-based. There are nuts and oats, too. I also gave them banana cinnamon or walnut muffins,” said Cayetano.

Although the Slice Muffin Diet is meant to be observed five days a week, the lawyers continued the plan during the weekend after seeing the benefits of eating less processed foods. Equally important, they moved more to burn calories.

“When people claim that they don’t have the time to exercise, I tell them, ‘What do you have time for, watching TV? Take a walk with your husband and bond, or do an extra workout,’” said Cayetano.

On the senator’s diet, Cayetano starts the day with oatmeal and milk, and homemade granola or bread and cheese. After a workout, she drinks a protein shake. A typical lunch consists of soup and mixed vegetables with quinoa for her carbohydrates, while dinner is salmon or grilled chicken. On cheat days, she indulges in creamy penne pasta with chicken, one of her favorites on Slice’s menu.

During the Inquirer interview, she savored the restaurant’s creamy tomato soup and a homemade dish of broccoli, chickpeas, carrots and quinoa. “I go by the philosophy that refined carbs are not good, so I eat less of regular white flour. I exchange noodles or white rice with quinoa, a grain that has highest protein content,” she said. Hence, the whole wheat croutons on her salads or brown rice in the champorado and arroz caldo in Slice.

At the Senate, she also offers her colleagues her brownies as comfort food when stressed, date-and-nut bars, and bite-size oatmeal cookies. “Five of those cookies fetch 100 calories. They’re more wholesome than brownies,” she said. For extended sessions at the Senate, she munches on healthy snacks—fresh granola with coco sugar; nuts, saging na saba, or muffins for perker-uppers.

Cayetano’s interest in fitness began in her youth. She looked up to her lola Schramm, who swam and exercised vigorously everyday, even in her twilight years.  Although she was a member of the national and varsity volleyball teams, she was putting on weight because of poor eating habits.

At the University of the Philippines Law School, more weight creeped in as she feasted on burgers and shakes. Doing her first marathon at age 25, Cayetano changed her diet to fruits for breakfast,  tuna sandwich for lunch, and homemade chicken soup with vegetables for dinner. She has since lost some 30 lbs, eliminating pork and beef and eating whole foods.

As an athlete, she recently competed in the Vaseline Xterra with its multiple trails in Cebu; she  is girding for the  Ironman 70.3 triathlon in Cebu this August. Her personal best for the Ironman 70.3 series was 4:46.  In marathons, her best record was four hours and one second in Amsterdam, which coincided with a meeting with the Inter Parliamentary Union (IPU), of which she is an active member.

“Every time I travel for the IPU, it’s for a dual purpose. Another year, I went to Venice for the conference which was held at same time as the marathon.”

An achiever, Cayetano pushes her body to the limits. “The body does what it’s told. Only the mind will limit you.  I’m capable of many things even though I’m getting older. My mind says, ‘You’ve done this before, you can do it again. You’ve done it under hot, hilly and exhausting conditions.’ That’s how it works for me, and it translates into every other aspect of my life. When I’m down and I’m facing challenges, I pull out from that same place.”

Unfazed about being 46, Cayetano said: “In sports, I may not get faster, but I’m not slowing down.  I find ways to perform better. They say you’re not supposed to run daily after age 45. I don’t see it as a limitation. I have other days to bike and swim. It’s better health-wise because you use other muscles.”

In all, public office, sports, baking, family and her blog (mydailyrace.com) keep her wrinkles at bay. Said Cayetano: “I’m not one of those who say, ‘Ang tanda na namin. (We’re old.)’  Growing older is a given.  Even my 12-year-old would say that comparing herself to age 3. I don’t feel my age just because my eldest daughter is going to college. I’m even proud of that.”