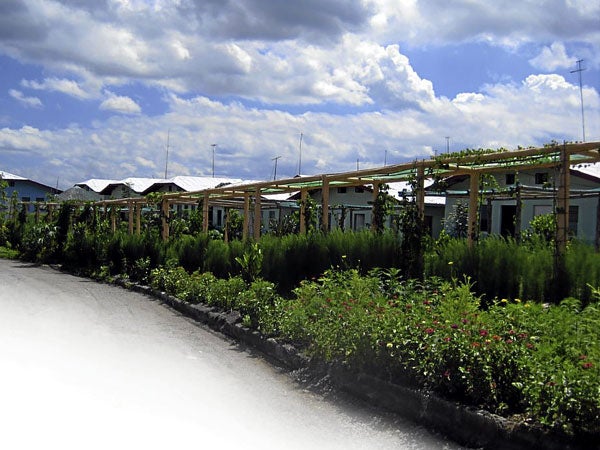 Cory Garden fronting a row of GK homes for the poor: Paradise compared to the city slums they left behind

Rising gradually on 14 hectares of verdant, undulating terrain is a farm, home, village and “university” rolled into one, where people’s dreams and ideas are put to the test, nurtured and turned into reality.

Gawad Kalinga’s (GK) Enchanted Farm in Barangay (village) Encanto in Angat, Bulacan is, as its name and location suggest, a special place like no other. Beholding it even in its unfinished stage could spark an OMG (oh my God) moment.

The farm is rapidly transforming the Angat landscape by being a sustainable community and a place of learning, creating and, most of all, sharing. It is exactly what it’s more daunting name connotes: the Center for Social Innovation (CSI), a place for daring and creativity. Living the CSI way is for the big of heart, not the faint-hearted.

When GK quietly began in 2000 “by building communities to end poverty,” little did its founder and driving force Antonio Meloto know how far he and his fellow dreamers from Couples for Christ (CFC) would go. GK began as a ministry for the poor of CFC. The story of how GK grew from its small beginnings is told in the book “The Builder of Dreams” by Meloto, a 2006 Ramon Magsaysay Awardee for Community Leadership and the Inquirer’s Filipino of the Year for 2005.

In May this year, Meloto received the Nikkei Asia Award for Regional Growth. Just recently, he was invited to the World Economic Forum in Jakarta. Speaking to thinkers, policy makers and generators of global wealth, Meloto described how GK is “creating a hybrid of philanthropy and social business to achieve impact, scale and sustainability.”

After GK777 (target: 700,000 homes for the poorest in 7,000 communities in seven years) was launched in 2003, GK grew by leaps and bounds and has been moving inexorably closer and faster to its goal. There are now more than 1,700 GK communities in the Philippines plus several in three Asian countries.

GK777 is now segueing into GK2024, “a 21-year vision which provides the roadmap towards a First World Philippines” and “ending the poverty of 5 million by 2024.” This emerging Asian model for development was unveiled globally at the 2009 GK Global Summit in Boston that gathered GK supporters from all over the world.

“CSI/Enchanted Farm is GK’s second phase,” Meloto enthuses. He shows a thick ring-bound physical plan of the farm, done to the minutest detail – and for free –by a team from the National University of Singapore. Several of the structures in the plan are finished, the rest are in various stages of completion. First to be finished is the colorful row of 40 homes now occupied by 40 families. In front is the Cory Garden that honors the memory of the late President Corazon Aquino, who launched GK777.

The GK families in the farm couldn’t ask for more. Most of the parents work inside the farm and so they need not spend time, energy and money for commuting. The children attend a public school nearby. The residents participate in building a sustainable community through their work and  their lives. Indeed, this is paradise compared to the city slums they had left behind.

When SIM visited, there were about a dozen young volunteers doing chores and integrating themselves in the farm. They came from different countries and the Philippines. Many are new graduates, others have had fruitful, high-paying careers that they gave up to work with GK.

There is Clarisse Simmoneau, 22, a designer from France, who was busy designing native crafts. Frank Chiu, a Filipino, left the corporate world and now oversees CSI operations. Billy Santos, 23, was teaching physics in Ateneo until GK beckoned. Cherri Atilano, an agriculture graduate and one of the Ten Outstanding Students of the Philippines in 2007, had stunned Fulbright officials when she postponed her US scholarship to work with GK. Filipino-Australian Jai Aguilar, 22, a business management graduate of La Salle University, manages GK’s infrastructure and site development and is into community organizing. Chilka Alvarez put lawyering on hold to go into cheesemaking (fromage de chevre or goat cheese) that would give livelihood to the poor. “Many of the crimes committed are driven by poverty,” she reminds the listener.

A number of foreign volunteers learned about GK via the Internet. Others knew about GK’s well-publicized track record. “Last year, we had 1,000 students from Singapore, then we had 400 interns from France,” Meloto says. “We try to give interns a patriotic education.”

“Filipinos are said to be high in IQ and EQ, but low in SQ and PQ,” he says, referring to intelligence quotient, emotional quotient, social quotient and patriotic quotient, respectively.

The Enchanted Farm in Bulacan is the first of 24 CSI sites being set up all over the country to complement the impact of thriving GK communities. Donated by a generous man named Jun Valbuena, the 14 hectares in Bulacan used to be idle, unproductive land.

But, as the saying goes, “if you build it, they will come.” Manpower and machines from Shell, Hyundai, Mang Inasal and units from the Armed Forces of the Philippines are among those breaking ground, building structures and paving roads in the farm. Workers come from GK communities in Bulacan. In the meantime, budding social entrepreneurs are creating and testing their products and services that will soon be offered in the farm and outside markets.

President Benigno (Noynoy) Aquino III is expected to visit the place anytime soon.  For sure, he won’t be disappointed.

First, it is a “village university for sustainable community development” where classrooms are connected to communities. Here students learn how to start social enterprises. Children living in the GK Village experience the natural environment, while their elders are slowly exposed to social entrepreneurship that would soon open doors for them.

The second component is a “Silicon Valley for social entrepreneurship,” where young entrepreneurs are provided an enabling environment to help them launch Filipino brands. Fifty of the most innovative social enterprises in the Philippines will be conveniently located at the Enchanted Farm to showcase their brands. They will also share in the farm facilities and resources.

The third component is a “Disneyland for social tourism,” in which Filipino and foreign visitors can have a first-hand experience of the Gawad Kalinga community, and gain insight into the social problems that face millions of Filipinos.

All these need infrastructure. A multipurpose hall for big gatherings is now in place. A bamboo “palace” is slowly taking shape. The restaurant/cafe without walls is almost finished. There is a building for the production of native crafts, sewing and other income-generating activities. An industrial kitchen for food products is almost ready.

Now when everything has been completed, don’t forget to check out the spa, chapel, swimming pool, bed-and-breakfast place, facilities for retreats and seminars. Who says one can’t have fun in a place like this?

Almost all the ingredients for the food products are grown organically in the farm. Fast becoming a favorite drink is Enchantea, made from lemon grass. Two young social entrepreneurs are now producing salted duck eggs dyed turmeric yellow (GK’s color of hope) instead of the common red. It’s also about creating brands. So it’s Golden Eggs for the salted eggs, Blue Bamboo for the furniture and crafts and TheoPhilo for the artisan chocolates from homegrown cacao. Expect more GK brands to emerge.

In GK farms in the provinces (and soon, in the Enchanted Farm) are produced many of the herbal ingredients for Human Nature, the health-and-beauty product line that is fast capturing the market because of its organic, non-chemical components sourced from hard-working GK communities determined to cross the so-called poverty line. Profits go to GK projects.

The Enchanted Farm/CSI is meant to be a showcase along the GK roadmap to 2024. If 2003 to 2010 was focused on social justice that went beyond charity, 2011 to 2017 is the “designer phase” called “social artistry, when we invite greater expertise, science and technology to grow our holistic model for development,” says Meloto who, true to form, continues to dream big.

2018 to 2024, he says,   is the era of social progress. GK envisions a new standard of living to take a permanent foothold in the life of a nation. This, according to GK, “will only be achieved by working on scale and sustainability of what have been established earlier – the spirit, the science and the structure. By this time, a new generation of empowered, productive citizens would have emerged, who lived through an exciting time of change – moving from poverty to prosperity, from shame to honor, from third-world to first-world and from second-class to first-class citizen of the world.”

And the Enchanted Farm? It promises to remain enchanting for generations to come. Come and experience the life.