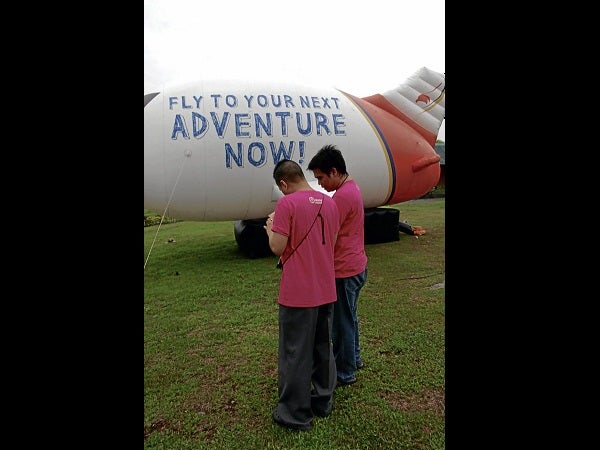 A running man in Davao

I’ve joined a couple of Amazing Race-type contests in the past—and always lost. Blame it on my not-so-athletic, street-stupid, issues-filled self. My legs get tired from running after just a minute. I hate sweating. I don’t like how stupid I look when I run. I have no sense of direction. I’ll never ask strangers for direction (coz of shyness/trust issues). And I easily get distracted when there are cute passersby.

Strangely, when I got the invitation to compete in Globe Telecom’s Racing Amplified, I said yes. I guess it was because it was going to be held in Davao, the land of pomelo and durian—two fruits I love. I love them so much I think they were the reasons why I signed up for the race.

Beginning December last year, Globe implemented a $700-million landmark mobile network modernization program in Davao, a key market and focus area for the leading telecommunications company. The program, touted as the most significant investment of the company in the last 20 years, includes an all-IP infrastructure, pervasive 3G coverage, double fiber optics capacity, 4G and LTE readiness, and overall quality and resiliency. The result? A radically enhanced network experience for the residents of Davao City through fast call connections, on-time delivery of text messages, and reduced incidence of dropped calls even at peak hours and traffic-heavy occasions. The goal of the race? To prove this.

Composed of traditional media practitioners and bloggers from both Manila and Davao, there were seven teams that competed. Each team had three members, one of which was a navigator. All the navigators had a little race-within-a-race. Once they get to accomplish a task, that was the only time they could get in touch with the other team members to tell them where to head for their own task.

We were issued iPhones—powered by Globe, of course. Apart from the need to coordinate, going online was crucial in accomplishing the different tasks as fast as possible.

For example, we had to take a photo of one of us wearing ethnic garb, and upload it on Twitter with a hashtag. In another challenge, we had to look for one snake and three crocodiles in a zoo, take photos of them, and upload the photos on Facebook. In yet another challenge, my partner and I had to go inside a Zorb ball and roll down the hill for 45 seconds—complete with screaming and cusswords, of course. After the dizzying experience, we had to take a photo of one of us beside the AirPhil express balloon by the entrance, upload the photo on Twitter, tag @airphilexpress—and wait for them to retweet it. Even our lunch break proved to be a challenge. Before moving on to the next one, we had to check in on Foursquare and let everyone know that we were at Riverwalk Grill—complete with a photo for proof.

Interestingly (and surprisingly), my team was always leading. We were always in first or second place. That was pretty refreshing for someone like me, who was always kulelat early on in the other previous races I joined. Could I have finally overcome my long list of issues? Or was it just because signal was so good I didn’t notice coordination with our navigator and accomplishing stuff on FB and Twitter were easy-breezy?

However, our last challenge proved to be the hardest. We had to ride a boat to get to a resort, where one member had to get a flag in the middle of the ocean (okay, not really the middle of the ocean), and then run to the final pitstop, where we needed to step on the mat with our navigators, who were all already there.

After getting soaked fetching that darn flag in the middle of the ocean, my partner and I ran like crazy to the final pitstop. We ran like crazy because we were first. All we needed to do was step on the mat with our navigator, and I could finally and officially proclaim that I no longer suck at races. As we approached the mat, I saw the navigators waiting for their team members—all the navigators but ours. And so I called him. His phone rang and rang and rang but he didn’t pick up. I texted him, and then called again. But there was no reply.

Soon, some other team became complete and got to step on the mat. Before long, another complete team happily stepped on the mat, and then another, and another.

And then after what seemed like forever, we see our navigator. He was ready with apologies and for us to step on the mat, but I didn’t even want to do it anymore. There was no need. Still, we had to. We were second to the last. Not the last, not the kulelat—if that’s any consolation.

Our navigator, as it turned out, was waiting for us somewhere else: at the other side of the resort, where he thought the meeting place was.

I just couldn’t deal with the fact that we almost won—in other words, that we lost—so during awarding, I just sat by my lonesome and tinkered with my iPhone. I wanted to post and tweet hateful and bitter statements, but knowing how fast the connection was and how instantly my hate posts would reach everyone, I decided not to.

At the end of the day, I had some realizations. First, the Davaoeños are sure lucky that Globe is investing a lot of money, time and effort to improve their network experience. Basing on my own experience with Globe during the whole day-race, I had no complaints about sending and receiving text messages, connecting to the internet, and getting good signal. I did have a problem when I was trying to call our navigator; he never picked up. But that definitely wasn’t Globe’s fault.

Second, losing sucks. Our team may have performed well during the race, but we still ended up as losers. Sure, it felt good that I was able to overcome several personal issues (I didn’t care how ugly I looked while running around, and I did get to ask a couple of strangers for help), but I had my eye on the prize—and I didn’t get it.

Third, everything happens for a reason. We may have lost in the race, but I felt like a true winner because of what happened afterwards. Not only did I get to meet the coolest gay guys in Davao, I also got to taste the moan-inducing Blue Cheese, Fig & Walnut Cheesecake over at a place called Osvaldo’s—it was the best pampalubag-loob ever.

And oh, I got to bring home the best durian pie and a whole box of pomelos, too. So I guess my Davao trip wasn’t that bad after all. Even if I lost in yet another Amazing Race-type contest. I really should stop joining them.

From Davao? E-mail the author at [email protected] or visit his blog at ninomarksablan.blogspot.com