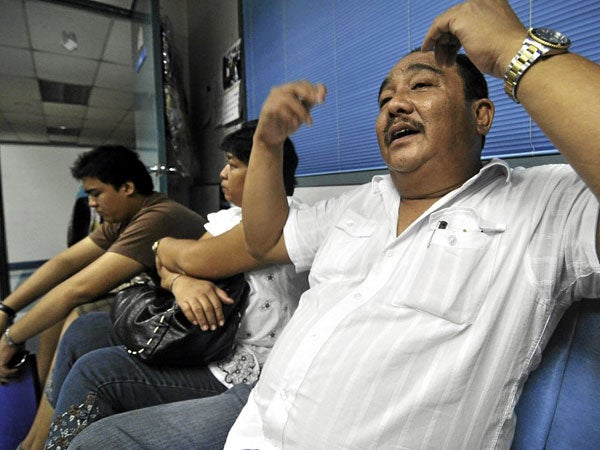 Death in the morning

Gregorio “Yoyong” Buncio tried hard to stay sober and clinical, but it was clear that his eyes remain trapped in sorrow, as he painfully re-created the horrifying event that abruptly snuffed out the life of his son Maico.  Maico Buncio, 22, was the country’s king of the motorcycle racing circuit and the fastest Filipino on two wheels.

Like a surgeon slicing through the body of a patient, Buncio gave a detailed account of what transpired one normal day in what was supposed to be the merry month of May at the Clark International Speedway inside the gigantic former American base.

The 53-year-old Buncio never imagined, not even in his wildest imagination, that his son’s back-breaking journey to put the country on the international racing map would end in blood and tears.

Maico’s fans also flooded his Facebook accounts with prayers and expressed shock at the accident that has raised questions about safety guidelines governing the sport.

“His rear tire skidded off some sandy patches (on the racing circuit) and he slid some 50 meters from his bike,” recalls  Buncio. “I know the difference between a good fall and a bad fall – and it was a good fall.”

He was at the pit area when his son took the skid during the qualifying race, he   adds. The teary-eyed Buncio knows what he’s talking about.  Having raced with the likes of former motorcycle demons Jovie Saulog, Jolet Jao, Butch Chase and Ernie Leongson during his prime, Buncio had witnessed lots of spills.

Maico, four-time National Superbike Champion, Golden Wheel Driver of the Year awardee and feted by the Philippine Sports Writers Association as the country’s fastest man on two wheels, was riding for Team Suzuki Pilipinas and was navigating a fast curve when the spill happened.

It wasn’t a big deal, as far as Buncio was concerned.  Maico, whom his father named after a  motorcycle brand in Europe, collided with Malaysian rider Ahmad Nashrul Baharudin during the first leg of the Asian Road Racing Championship (ARRC) on  May 14 at the Sepang International Circuit. He escaped unscathed despite a high speed crash that detached the sub-frame of his Suzuki GSX-R 600 race bike and wrecked the bike.

But the next scene at the Clark Speedway Saturday afternoon was heart-pounding for Buncio. “From a distance, I felt something was wrong when my son didn’t get up to pick up his bike. He remained stationary. As I ran nearer, I thought he was trying to pick himself up from a face-down position or that he was trying to free himself from two protruding bars on top of him,” he recalls. “Then I saw another racer, Richard Morgan, who was also in the qualifying round, waving frantically, and I knew that this was bad.”

As Buncio got closer, what he saw shattered his spirit. Maico’s body was impaled at the abdomen by a third protruding steel bar from the unfinished concrete barrier.

“I will never forget that scene.  Pain was written all over Maico’s face and I was helpless to do anything.  All I could do was comfort him,” says Buncio, groping for words while describing the accident.

Buncio says he got to his son’s side at almost the same time as the ambulance. But he wasn’t ready for the next scene: To his horror and against the frantic advice of Morgan, he claims the AeroMed emergency staffers, instead of cutting the steel bar to free Maico, decided to pull the young motorcycle champion free from his entanglement. This, they learned later, caused massive internal damage to Maico’s organs and prompted him to scream in pain.

Still conscious, Maico was brought to the nearby St. Raphael Foundation and Medical Center in Mabalacat, Pampanga, before being transferred to the University of Santo Tomas Hospital in Manila at 4 a.m. Sunday morning.

Moments after the accident, text messages asking for blood donations for Maico were circulated by friends and family members. It turned out that the young rider was bleeding profusely since one of the punctured organs was his liver.

Hoping against hope, Buncio and the rest of his family continued to keep  faith that Maico would be able to survive and resume racing again. “He remained conscious before being wheeled in for surgery. He even dictated the eleven digits of the mobile number of his girlfriend Sulgi, a Korean national who was his classmate at OB Montessori, to his Team Suzuki colleague, Mel Aquino. He was still very conscious.”

But death took the young Filipino champion at 3:57 Sunday afternoon, almost 24 hours after the accident.

According to his death certificate, the rider suffered multiple organ failure.  He also suffered from severe blood loss due to severe trauma of the abdomen secondary to the motorcycle accident.

“Do you know the irony of it all? When he was alive, Maico had advocacies on riding safety,  and would remind people that  the safest place to race is on the racetrack, which is a controlled environment,” says his father.

While he masks his grief with conviction, Buncio’s wife Mylene struggles to put into words the unspeakable grief that  hit their family. “How do you describe an event that cost the life of my son?  We have to move on but I am still searching for words,” says Mylene, who needed to be escorted out the room by son Barney while her husband spoke lengthily about Maico’s final hours.

But, she acknowledges, she feels honored by the tremendous outpouring of sympathy and support during Maico’s wake in Makati. The sound of more than a thousand motorcycle engines ruled the roads from Mandaluyong to Marikina as a  long motorcade of two-wheelers brought Maico to rest at the Loyola Memorial Park.  Colorful banners festooned the funeral vehicles and waved along the route with their farewell message, “Ride high in heaven,” and cry for justice.

“I didn’t expect that so many people love my son,” recounts Mylene, who has four other children – Lourdes, Barney, Shara and Jacq.  Mylene says she will always remember her son as a shy, serious and very business-minded young man.

Mylene has kept Maico’s earnings from his race victories since he was 5, which enabled the young biker to put up a branch of their business, YRS Motorcycle Modifications, along Rizal Avenue in Caloocan City. The shop sells and distributes ELF oil and lubricants, YRS mufflers and other motorcycle parts and accessories.

The original YRS Motorcycle Modifications store is located at their home in Mandaluyong City.  “Every morning, Maico wakes at 4 to exercise, and then drives to the NAMSSA Race Track in Bicutan to practice with his motocross bike.  After practice, he would  man the store in Mandaluyong and then go to  the Caloocan branch after taking lunch with the family, especially his grandmother, Aquilina,” recounts Mylene. “He seldom parties and I think he has mapped out his future after racing very well.”

His father agrees. “Maico was a very disciplined guy.  I had to tell him to stay relaxed and enjoy the race.”

Buncio recalls buying Maico his first ride, a plastic toy car from Toy Kingdom, when he was 4. “He was so delighted while riding the foot-powered car that he crashed it against a chair inside our home.  I later bought him a Yamaha PW50 from motocross champion Butch Chase. That’s how Maico learned to ride a motorcycle before he learned to ride a bicycle.”

Maico showed a glimpse of his emerging prowess when he copped first place in the 1996 FBO Motorcross series for the 50cc category in Tagaytay City. After graduating from the higher classes, he became the talk of the town when, at 19, he stopped the reign of 10-time Rider of the Year, Jolet Jao, in the 2007 Shell Advance Superbikes Series.

A  fan of Italian motorcycle legend and nine-time MotoGP champion Valentino Rossi, Maico had trained his sights to become the first Filipino motorcycle racer to compete internationally. He was then a UST student before his heavy racing schedule forced him to take up multi-media design at a Makati school.

Suzuki Philippines set Maico’s dream in motion when he was named  one of its  two riders to carry the Philippine flag in the Asian road racing circuit. He competed in the Superbike 600cc category, where speeds normally reach more than 200 kilometers per hour. When presented to the media, the good-looking Maico humbly accepted the gargantuan challenge of giving the Philippines a podium finish in the coming years.

It was always clear, though, that the soft-spoken Maico would rather do his talking on the race track.  Until the fatal accident silenced him.

Following his untimely passing, Maico was replaced by Japanese rider Yusuke Teshima. “We are not stopping our journey to the ARRC.  We are going to offer the ARRC to Maico, and Suzuki will achieve his dream for him,” says SPH president Satoshi Uchida.

It’s a heartwarming gesture, but Buncio wants nothing less than justice. “Maico’s death should serve a higher purpose.  Questions must be answered regarding safety standards in local racing circuits, while the accountability of people involved in the accident that  caused his  death must be exposed. We’re no longer fighting for Maico alone, but for all the kids out there who have the passion to ride motorcycles.”

The Committee on Youth and Sports Development of the House of Representative has started a congressional inquiry into the accident and the circumstances that caused it.