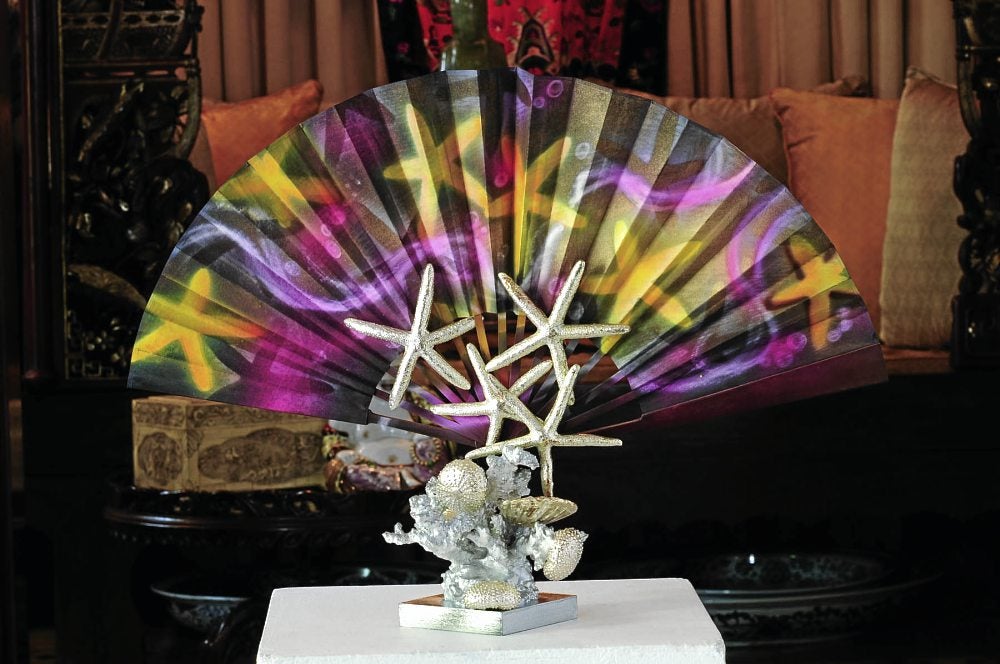 “DENIZENS of the Deep” portrays resin and airbrushed starfish. PHOTO BY BOBOT MERU

Creative designer has fun with fans

In the old days, the hand fan was a cooling agent, a fashion accessory, a tool for flirtation and even a martial arts weapon.

Design consultant Rachy Cuna is turning the old-fashioned folding fan into an art installation. He’s plucking them from wrists and putting them on display to express his statements on life.

Unlike the lacy floral numbers from Spain or the stark fans from Japan, Cuna’s fans are more mixed-media, treating bamboo-and-silk fans from China as his canvas.

“Historically, there have been fan paintings in China, Japan and Korea. Mine is an interpretation of found objects, and my collectibles are mounted on these special fans,” he said.

Seventeen new works will be exhibited in “AbaniKo,” a pun on the Tagalog translation of “My Fan,” starting tomorrow at Hotel InterContinental Manila. This is one of the initiatives of InterCon’s general manager Christian Pirodon to promote Philippine culture in the hotel.

“I started in 2005. Visitors would come here but had no time to see the galleries,” Pirodon said. “I wanted to show them what Filipino art is all about. Since 2005, I’ve been doing art exhibits at the lobby. When I came back in 2007, I met Rachy and was impressed with his incredible insights on producing beautiful art using traditional elements from the Philippines. We wanted to show something of the country and the ingenuity of the Filipino artist.”

Pirodon’s favorite installation is the “Midas Catch” fan, which depicts how the ocean reacts to light. From afar, it appears blackish because these large bodies of water contain suspended particles, thereby allowing the light from above to be reflected.

Through color washes, Cuna shows the optical scattering of light from water molecules in bright magenta, orange and yellow against the purplish-black of the water. The fan rests on a base of resin shells and corals to convey accumulation.

The sea and its abundance are a recurring theme. “Denizens of the Deep” portrays resin starfish over its airbrushed counterpart.

“Fishful Thinking” rests on a koi, a symbol of abundance, while the fan is littered with tiny fish in jade.

“Circles in My Mind” is a fan covered with mother-of-pearl. “Blanco Y Negro” is a dramatic contrast of mother-of-pearl leaves and flowers with a black silk background.

Fascinated by the shape of the barnacle cluster seashells, Cuna named his fan after cumulus clouds instead. Laden with keishi  and mother-of-pearl shells, the fan is placed atop these non-endangered seashells.

Some fans become the equivalent of thought balloons. “Orange Minded” is Cuna’s pun on being green-minded. A black mask from his collection is perched on a triangle base. Atop the mask is a black fan with acrylic orange flowers over painted flowers.

“Green Nirvana” is a ceramic bust of Kuan Yin with a fan filled with jade-colored flowers on top of her head. Pirodon interprets these installations as the soul contemplating beauty.

References to his Chinese roots and the repeated use of gold mark Cuna’s works. “Buddha Bloom” is a gold-painted Buddha holding a black fan with gilt-finished Chinese antique coins.

“Golden Dimsum” characterizes Cuna’s penchant for vertical arrangements, as well. Mini bamboo steamers and siopao and hakaw are piled one on top of each other, and juxtaposed with a golden fan embellished with chopsticks.

“Bambusa,” the scientific name of the bamboo, shows the Oriental aesthetic of simplicity as it depicts a black fan with a special kind of weed that mimics bamboo nodes.

One of his pieces de resistance is “Musical Chairs,” a whimsical rendering of a fan with lots of chairs from base to top, all in hot pink.

Pirodon lauds Cuna for using many objects found in the Philippines and elevating them into art. One such is “Coco Loco,” a fan studded with coco beads and perched on a coconut shell.

As in all his exhibits, Cuna said he just wants to unbridle his imagination. How does he do it?”

Asked where he gets his wit and humor, he quipped, “You’ve got to have a crazy mind.”

“AbaniKo” will be on view from May 17-June 8 at the lobby of Hotel InterContinental.