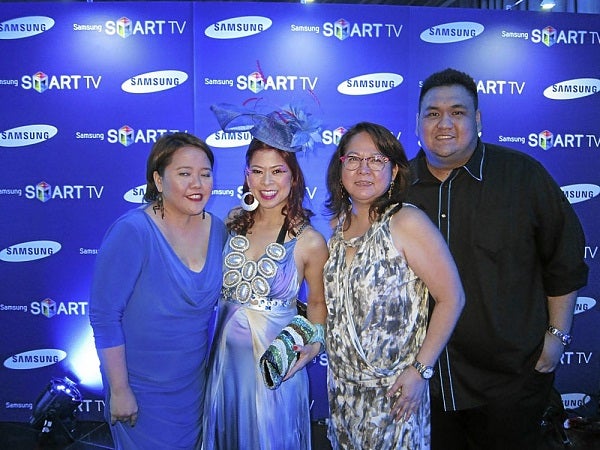 Can you imagine a future when your TV can recognize your voice and your mobile phone can tell who your friends are based on their photos? That future is here.

Samsung Electronics (www.samsung.com/ph) has just raised the technology bar a few notches higher. Already the leader in smart TVs, the company has introduced a new era in entertainment by placing the TV at the center of a home ecosystem, where all devices are interconnected.

The Samsung AV Roadshow at the NBC Tent was quite an event. Ariel Arias, head of Samsung electronics business unit, showed off their devices with aplomb. Three philosophies drive the Samsung vision for a “smarter life”—smart interaction, smart content and smart evolution. And all that is in their TV today.

Today my hubby Dennis can come home and say, “hi TV,” upon which the unit starts up, thanks to voice recognition. It also has face recognition, so he can ask his TV, “hindi mo ba ako kilala?”

My daughter Annika will bypass traditional channels and say, “web browser,” starting up her fave social networks and online videos. Thanks to motion recognition, she can wave to pump up the volume.

My son Bryan will love the smart content, with an abundant gallery of apps to choose from. Thanks to a dual-core processor, the TV can even multitask—showing TV5’s “Extreme Makeover Home Edition Philippines” while downloading videos, for example.

His younger brother, Tyrone, will go for the “AllShare Play” mode, enabling content to move from device to cloud and back to another device—all regardless of location. Suddenly, war games can be played with his friends in different homes—but via the TV and not a computer.

Smart Evolution makes the Samsung Smart TV “future-proof” for years to come. Thanks to its proprietary system-on-chip technology, Samsung is the only company that can deliver an evolving TV. With a simple slot in at the back of TV, Samsung’s Evolution Kit allows you to easily enjoy the benefits of the latest TV technology year after year, without purchasing a brand-new set.

The TV was good, but the mobile phone was even better. The new Samsung Galaxy S III (www.samsungmobilepress.com) is the highly anticipated third generation of the Galaxy S

This phone with a “heart” understands you, waits till you fall asleep, sees your best side and lets you do two things at once. Redefining the meaning of Smartphone, the Galaxy S III shows that technology can fit naturally into one’s everyday lifestyle.

JK Shin, president of Samsung IT and mobile communications, says the Galaxy S III has been created with our human needs and capabilities in mind. The phone’s personalized S Voice feature can be used to play our favorite songs, send texts, organize schedules, browse the web or automatically launch an application.

He was accompanied by Coco Domingo, Samsung mobile product market head, who demonstrated several unique features of the Galaxy S III. For example, by lifting the unit to your ear while messaging someone, the phone will dial that person’s number automatically. It is intuition at its finest.

We all watched as endorser Sam Milby had his unit transfer some photos from another unit by simply putting the phones together. With the new “S Beam,” the Galaxy S III expands upon Android Beam, allowing a 1GB video file to be shared within three minutes, and a 10MB audio file within two seconds, by simply putting two Galaxy S III phones back to back, even without a Wi-Fi or cellular signal.

And just like the Smart TV, Galaxy S III has “AllShare Play” to instantly share any files.

My favorite feature is, of course, the 8MP camera. It features a zero-lag shutter speed that lets you capture moving objects easily without delay. The image you see is the picture you take. The “burst shot” function instantly captures 20 continuous shots at 3.3 frames per second, and then goes a step further by selecting the best eight photographs for you, when you recreate the best photo feature.

And best of all, the Samsung Galaxy S III is available from Smart Communications. Smart’s ongoing promotion may even get you the unit for free!

Right after the launch, I went straight to my house for an African-inspired party I organized to welcome home my San Francisco-based cousin Leica and her hubby Martin Argosino, as well as to mark the birthdays of so many May celebrators.

Rajo has been hitting homeruns lately. He just launched his Rajo Uno and Dos Cologne with Bench in a fantastic show at SMX. Naturally, he and Bench supremo Ben Chan provided prizes for the party games of the evening.

Among the prizes was the new cologne of Michael Cinco, called Impalpable. Both Michael and Rajo had incredible fashions shows on the last day of Fashion Week.

It’s always special to throw a party and get support from friends, even with less than a day’s notice. Goldilocks designed special cakes for each of the celebrators and they all looked scrumptious. We also had extra-large Toblerone chocolate bars for prizes to the winners of Charades.

Chris Botti back in Manila

Let me end with a plug for “Chris Botti Live in Manila,” the one-night performance of Grammy-winning trumpet master Chris Botti at Resorts World Manila’s Newport Performing Arts Theater on June 19. Hailed as the largest-selling American jazz instrumental artist, he has a unique and signature fusion sound.

Chris is an old Manila hand. He was here last year in a magnificent, live gig, which formally launched Radio High 105.9. Now he is set to reclaim the Manila stage with an all-new repertoire, plus a few fresh faces in his band lineup.