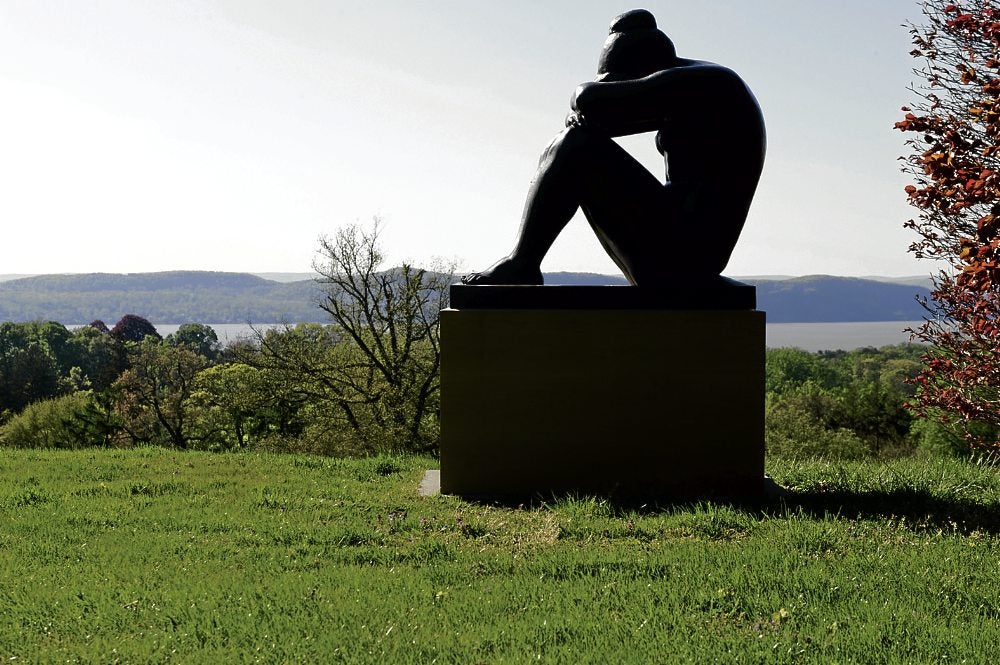 The train out of Grand Central Terminal silently wove in the dark through the invisible network of tracks in the underbelly of Manhattan until it surfaced in  the sunlight.

In a few minutes, the city dropped away and the train followed the scenic banks of Hudson River.  Calmed by the swaying of the train, we disembarked less than an hour later at picturesque Tarrytown station, looking more like a 1920’s era stone and wood country cottage than a train depot.

Tarrytown, an old Dutch settlement nestled in Sleepy Hollow on the Hudson,  is immortalized by Washington Irving’s 1890 classic story of the headless horseman, “Legend of Sleepy Hollow.”

Shaded by a canopy of trees in today’s Tarrytown, we drove toward Pocantico Hills through the American suburban dream of quiet streets that wound uphill, with large expensive houses on either side standing on perfect, wide lawns whose acreage distanced homes from each other, green space eventually giving way to a park where the road ended at an imposing iron grille gate, entrance to the Rockefeller family estate.

A short drive through estate roads is the Coach Barn, a stone structure that housed the family’s horse-drawn carriages and automobiles, now architecturally repurposed as a private meeting center maintained by the Rockefeller Brothers Fund for the  family’s philanthropic activities, and also for use by selected organizations with parallel purposes.

Solid stone walls of the Coach Barn frame sweeping garden views outside the glass walls of meeting rooms that complement Picasso wall tapestries and a significant collection of Chinese scrolls and calligraphy. In the bedroom suites, signed Audubon prints hang on the walls.  Also within the cavernous Coach Barn is a collection of classic automobiles and horse-drawn carriages once used by the Rockefeller family.

The bonus to having participated in a forum at the Pocantico Center was enjoying private access to remarkable Kykuit, its history, gardens, architecture, spectacular scenery and view of the Hudson River, an opportunity difficult to experience again.

The estate once covered over  3,000 acres (1,200 hectares) of land in Pocantico Hills, a hamlet in the town of Mount Pleasant.  Although much of it has been turned over as parkland and forest reserve for public use, 60 percent of the area is still privately held.

This is the place “where fine views invite the soul and where we can live simply and quietly,” John D. Rockefeller Sr. once said of the hilltop that was to become home to four generations of the Rockefeller family. 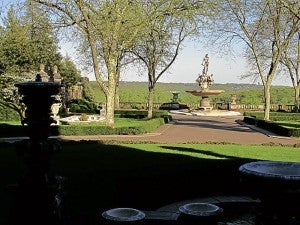 The hilltop view sweeps across the Hudson  all the way to the bluffs of the New Jersey Palisades across the river.  To protect the view, John D. Rockefeller Jr. actively participated in  preservation of the Palisades.  He also commissioned the design of a forest surrounding the estate to hide village rooftops on the lower slopes to allow an unobstructed vista of the river.

Much of Nelson Rockefeller’s modern-art collection was given to the Museum of Modern Art in Manhattan.  However, he stipulated that the outdoor pieces at Kykuit remain there, believing that they went well with the surroundings.  Great care was taken with the positioning of each piece, relating it to the river view and natural light conditions.

Kykuit is the only surviving Rockefeller property that was home to three generations of the family, starting with John D., the founder of the Standard Oil Company.

Public areas are on the first floor of the house, the library overlooking the river, music room, drawing room, and family dining room.  Its furnishings include 18th- and 19th-century antiques, fine porcelains collected by John D. Jr, as well as 20th-century paintings, tapestries and prints collected by Nelson, whose collection of Picasso tapestries and significant 20th-century art are on display in the five-chamber underground galleries beneath the house.

Being amid splendid architecture, picturesque landscaping and extraordinary art already made the visit to the estate remarkable. But unforgettable was that no other soul except our little group was there, enjoying absolutely beautiful surroundings that were so serenely peaceful, given free access to the grounds where non-family members were allowed to go, free to walk up to any artwork, sit in any gazebo to enjoy the magnificent view, or to walk in landscaped gardens so vast they seemed to have no  boundaries.

The Indian colleague at our meeting summed up our experience perfectly.  “We are at an American maharajah’s palace,” he said.

Unlike Indian maharajahs, this American family lived completely at ease with its sumptuous surroundings.  There was no need to flaunt.  Everything was so understated because this was a space for a private but privileged family to enjoy.

Kykuit is one of those few places where what we would consider extraordinary becomes ordinary because it is experienced within the context of the quiet and private lifestyle of an American maharajah’sfamily.