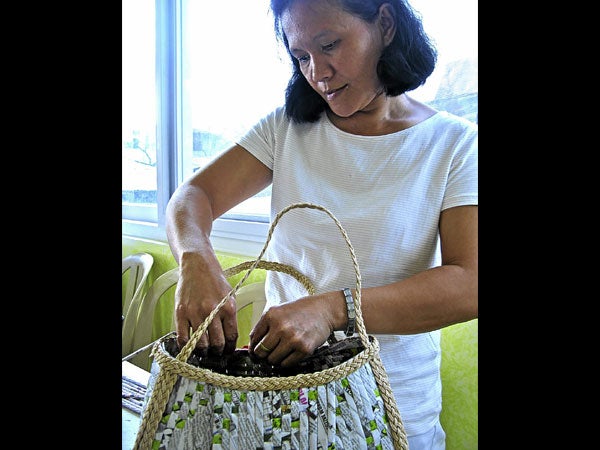 Show and tell: Nanette Tolo applies finishing touches on her bag during a workshop session. Photograph by Isabel L. Templo

It’s in the Bag

The happiness and pride in Nanette Tolo’s eyes are unmistakable. Never mind that she had to stay behind after almost everyone had gone home—the bag she’d been working on for the day is finished. After a quick once-over, she says, “For sale na. Bili na kayo (Come and buy it)!”

Tolo is one of 17 women who joined a workshop in Barangay (village) New Zaniga, Mandaluyong. A livelihood project of the barangay and the Rotary Club of Greater Mandaluyong (RCGM), the workshop taught the women how to make bags, with a twist: The bags are made of old newspapers.

Teaching the women was Lulu Trinidad-Ocampo, who came up with the bag-making technique in 1992. She recalls that a guitarist in Sapang Palay, Bulacan was trying to make baskets from newspapers. She asked him to try making bags instead. The guitarist eventually gave up—but she didn’t, perfecting the method over time. “You should have seen me when I was able to make my first bag stand. I was jumping up and down!” she says.

Ocampo realized that the skill could be a source of livelihood for others. And so the project “Bags for Life” was born. From Bulacan to Nueva Vizcaya, Cebu to Iloilo, and even Hong Kong, Ocampo estimates that she has taught the skill in hundreds of places.

The bag-making process begins with sheets of newspaper tightly rolled into small strips. The strips are woven by hand to form the base, sides, and flaps of a bag. The number of strips used depends on the size of the bag, but generally, one newspaper is enough for one bag.

And then follows creativity and taste. Patterns can be woven into the bag following the colors printed on the newspaper. Braided twine or leatherette can be attached as trim or as handles. Colorful beads or metal rings can also be added for style and glitter. Finally, a coat of lamination is applied over the newspaper for protection.

With her husband doing odd jobs, Aguirre and her family sometimes live on just P300 a day. So when she heard about the bag-making workshop, she decided to give it a try. “Natuto ka na, kikita ka pa (You learn something and you earn from it),” she says.

Mila Trinidad-Puyat, RCGM president and Ocampo’s sister, says their club—chartered just last December—is partnering with New Zaniga village to market the bags. The workshop graduates will make the bags and RCGM will buy them in bulk, selling them under the label “D’yario.” Puyat adds that they have even contacted artists to paint on some of the bags to make them more attractive and saleable.

But in her experience, the bags practically sell themselves. “When I’m at the mall, I tell the cashier not to put my items in a plastic bag, but in my D’yario bag,” she says. “You know what they say when they see my bag? ‘Ma’am, gusto mo bang ibenta (would you like to sell it)?’”

There have been other livelihood projects in Barangay New Zaniga, but none as promising as this, says Liza Cruz, a member of RCGM, whose husband is New Zaniga Village Captain Edwin Cruz. “If you consider the capitalization of the other projects, there’s no chance to really earn,” she says. “Unlike this project—if the women continue making the bags and we get orders, they will be assured of a steady income.”

Orders have already been coming in. Some 200 bags have been ordered for the RCGM induction in May, says Puyat. And that’s just for the Rotary Club.

To get an idea of how lucrative this venture can be, one need only look at other places where the bags are being made. The National Center for Mental Health (NCMH), also in Mandaluyong, is a good example. Puyat initiated the bag-making there more than 10 years ago as a livelihood project for the Rotary Club of Mandaluyong, while her husband Tony was governor of Rotary International District 3800.

Since then, the bag production at NCMH has been thriving, Puyat says. Rotary Mandaluyong still helps with the marketing, but orders now come in from other groups as well.

Another plus to this bag-making project, aside from the potential for income, is the fact that it can be done at home. “You don’t need a factory,” Puyat explains. “We see this as kind of a home industry.”

This is what makes the bag-making venture attractive to women like Tolo, who works from home as a manicurist. She says, “Pwede kong isingit sa oras na walang ginagawa (I can do it when I’m not doing anything).”

“Magluluto ka pa, maghuhugas ng pinggan (You have to cook and wash the dishes),” adds Aguirre, a stay-at-home mother of four and grandmother of one. “Pero pag inupuan mo siya at kumpleto ka na [ng gamit], matagal na ang isang oras pag sanay ka na (But when you really focus on it and you have all the materials needed, it will take you just an hour to finish a bag once you’re used to doing it).”

The bag-making project couldn’t have come at a better time. In March, Mandaluyong City Councilor Jessie Garcia introduced a draft ordinance seeking to reduce the use of plastic bags in stores and restaurants. Similar ordinances have already been implemented in the cities of Muntinlupa and Valenzuela, as well as the municipalities of Carmona, Cavite; Los Baños, Laguna, and Sta. Barbara, Iloilo.

In New Zaniga, a barangay ordinance proposing the same has been approved. Cruz knows all too well the drawbacks of using plastic bags, as their area is prone to flooding. He recounts that during “Ondoy,” some areas in their barangay sank in chest-deep floods and they had to swim to rescue stranded residents.

“Nakikita ko ang problema tuwing naglilinis kami ng drainage—’yung mga plastic doon sa drainage (I see the problem whenever we clean out the drainage—there are plastic bags),” he says. “Hangga’t maari, dapat papel ang gamitin (As much as possible, we should use paper).”

Cruz knows the new ordinance might meet with resistance, if not criticism, from the residents of New Zaniga but this is something that must be done. To assist them, he plans to supply them with bayong (woven reed bags) or paper bags for their use. “Parang noong araw, di ba? Bayong lang. Hindi naman uso ang plastic noong araw (It’s just like the old days, right? People would use bayong),” he points out.

With a D’yario bag, one can easily comply with the ordinance. Not only are the bags attractive and fashionable, they can also be used for shopping. (One bag design is actually patterned after a grocery bag.) And because the bags are made from paper, they are recyclable and biodegradable, posing no threat to the environment.

In fact, making environment-friendly bags is exactly what Ocampo set out to do. “I had a pile of newspapers and didn’t know what to do with it,” she recalls. “But I knew it could be made into a bag.”

It’s an ingenious way of repurposing old newspapers that would otherwise just be discarded.

Even used manila paper or old calendars and telephone directories can be used to make a D’yario bag. It all depends on one’s creativity and skill. The women can even create their own designs after learning the basics from Ocampo.

Beauty salon owner Marietta Dagalea has started doing this, experimenting with smaller bags for her holiday gift giving to loyal customers. “Gawa ko lang ’yon. Hindi tinuro sa amin (I did that on my own. That was not taught during the workshop),” she says.

If nothing else, it’s a gratifying skill to have. Dagalea notes that the bags she made were a hit with a balikbayan friend, who readily got some of them. “Gift ko na sa kanya ’yon (That’s my gift to her),” she adds.

The skills and techniques that Dagalea, Tolo, and Aguirre learned have given them fulfillment and hope. Bag-making has breathed new life not only into old newspapers, but more importantly, into the women of Barangay New Zaniga.

As Puyat sees it, “It’s not just about the money or having a livelihood. It’s about changing lives.” <strong>Women’s Feature Service</strong>