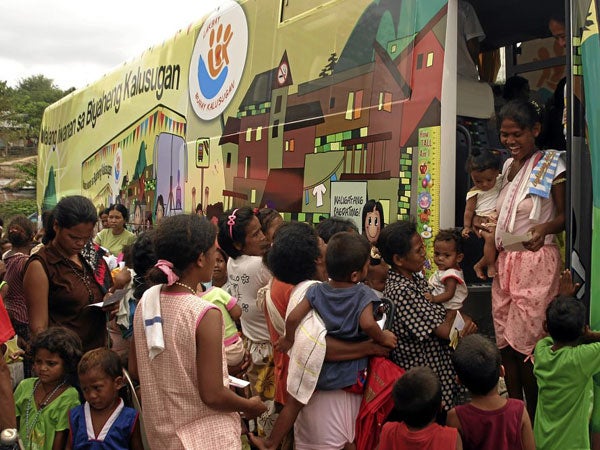 “Byaheng Kalusugan” is as real and literal as it gets when the colorful bus rolls into town and the show begins. But it’s not a circus or a carnival that draws the crowds. It’s the mobile clinic and consultation office, plus all the activities that highlight every Lakbay Buhay Kabuhayan (LBK) stop.

Called LBK and launched in March this year, the health caravan has been promoting health-seeking behavior among couples of reproductive age and children aged five and below in select sitios (sub-village) of Capas, Tarlac; municipalities in Lingayen, Binmaley, Bugallon and Labrador in Pangasinan; Gabaldon, Nueva Ecija, and Sagay, Negros Occidental.

A typical “Byaheng Kalusugan” visit is very festive. There are guided, interactive exhibits, health classes, story-telling for children, video presentations, skits, and other entertaining means of educating the masses about their health. The platform through which LBK shares its advocacy is the bus with the message “Walang Iwanan sa Biyaheng Kalusugan” (No One is Left Behind: We are all Drivers in this Journey to Health).

The most in-demand medical services in the visited communities so far have been pre- and post-natal and pediatric care. Most mothers inquire about the health of their babies and children during check-ups. Anemia is a common concern.

The campaign addresses the need to make communities aware that health is not the responsibility of government alone, and that they should not simply wait at the receiving end of medical services.

“Indigent communities are used to medical missions and dole outs, which are merely curative,” explained LBK project manager Rey Soriano. They don’t feel responsible for ensuring their own health and take advantage of these events only to avail themselves of vitamins, vaccines and other free medical services, he added.

For many, if not all, of the recipients of LBK’s services, it was their first time to attend a health event that sought to educate them through classes, exhibits, video, presentations and other fun, engaging and entertaining means. But they were all receptive to the campaign, the ideas and the lessons.

LBK also provides family planning education services, but Anden was quick to say that “it is neither for nor against the Reproductive Health Bill.” Neither do medical workers give out contraceptives, she added. What they do provide is counseling on responsible parenthood. Many women were found to be pregnant and breastfeeding at the same time. Death due to complications in pregnancy and unsafe delivery were also pressing issues. Healthy spacing of pregnancies, regular check-ups (four times during the whole nine months), safe delivery in health centers or with a skilled birth attendant and providing one’s self with proper nutrition were found to be the most urgent health issues of Filipinos.

Enthused Barangay (village) Health Worker Delia Cayaban of Gabaldon: “Marami po kaming naserbisyo. Mahirap pero masaya.” (We were able to serve a lot of families. It was difficult, but fun). She related that they underwent training on interpersonal communication and counselling prior to the LBK experience.

Provincial Health Officer Dr. Josefina Garcia recalled how expectant mothers during the tour were very curious about the nine maternity dresses or dusters that illustrated the growth of the babies as their pregnancies progressed.

“They really wore the dusters, opened the paper flap on the belly to look at the illustration of how big the baby was at every month, and read what was in the pockets of the dusters about the development of the baby at that age,” said Dr. Garcia. They also listened intently to the lectures on nutrition, safe motherhood and birth planning.

So called “male topics” like vasectomy and the correct way of using condoms were also included in the tour.

Garcia explained that as a follow up activity, the Barangay Health Workers will go house-to-house and do one-on-one lectures for women of reproductive age.

The health fiesta caravan proceeds to seven other pilot sites through 2011, namely Negros Occidental and Bohol in the Visayas in July; Bukidnon, Zamboanga del Norte, Compostela Valley, South Cotabato in Mindanao, and Maguindanao in ARMM.

LBK was initially designed to be a public-private and public-public partnership. The traveling bus which they use as a platform for their campaign and as a mobile clinic was donated by the Dona Marta T. Hernandez Foundation of Victory Liner Inc.

The US Agency for International Development provided technical assistance. They also get a considerable amount of help from the media, like the Philippine Daily Inquirer, which provided free ad space for LBK. Other partners are Melawares, Air21, OMF Literature Inc., Dakila – Philippine Collective for Modern Heroism, Manila Broadcasting Company, UNTV, Center for Community Journalism and Development, Philippine Press Institute, and the Alliance of Young Nurse Leaders and Advocates.

The local government units also have a stake in the project. They are responsible for announcing the health tour, mobilizing the families in their region, providing the venue and feeding all who attend the event. Easily the most important asset is the training among local health and barangay workers to follow through with the work LBK has started in their respective areas.

LBK is part of the Aquino government’s mission of providing Filipinos Universal Access to Health. As Dr. Ricardo Ramos from the Provincial Health Office put it, “People rely on the government to resolve situations that were perfectly avoidable in the first place. In the case of dengue, for example, all people have to do is regularly check their households for anything that holds clean, stagnant water and cover all water containers. It’s a preventive measure that takes minutes to do.”

The ultimate goal of the Lakbay Buhay Kalusugan program is to reformat the mindset of citizens, creating self-reliant families that share the vision of the state. “The community must be empowered down to the smallest unit—the family. We want each family to be able to manage itself and be responsible for the health of each member.”