Is the Philippines Ready for Divorce? | Lifestyle.INQ ❮ ❯ 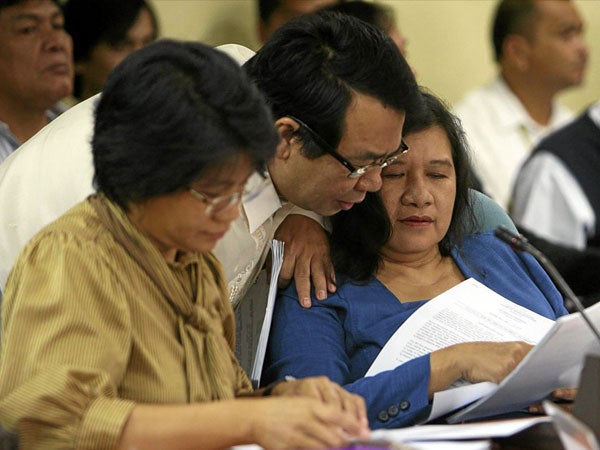 Is the Philippines Ready for Divorce?

When Marita last checked herself into a hospital, it was to recover from the violent beatings her husband gave her. She contemplated filing for an annulment, but post recovery, she returned to her husband, “because of the kids,” she said. And the cycle of violence continued. They were married amid the promise of a fairy tale, but five years and two children later, the rosy scene turned black and blue.

Now separated from the husband who almost killed her, Marita wishes there are other options that would give her another chance to re-create a happy home.

That will have to remain in the realm of wishes. Philippine culture views marriage as a sacred union of love, with legal prescriptions provided to preserve it. But marriages are never detached from social realities, and for a lot of women, the inequalities and violence they experience within the marriage just aren’t worth living up to society’s expectations of them.

Instances of violence against women (VAW), according to the Philippine National Police Women’s Desk, have been increasing in recent years: from 1,100 cases in 1996 to over 6,500 in 2005, almost a six-fold increase. Of VAW cases filed from 2001 to 2007, domestic violence comprised 76.2 percent. The perpetrators were mostly the victims’ husbands.

According to Gabriela, a national alliance of women in the Philippines, of the 294 cases of violence against women reported to them from January to May, 2011, 204 involved domestic violence.

Despite the alarming figures, the numbers can be considered conservative as most women opt to suffer in silence to “keep the family together” and to avoid the stigma of a broken marriage.

In the Philippines, the options to end bad marriages legally are restricted to three.

1. Legal separation, which allows the couple to separate on the basis of repeated violence and physical abuse, sexual infidelity, conviction of a criminal offense with a penalty of more than six years, and abandonment. But this option does not allow the couple to re-marry and requires that they maintain fidelity. So individuals legally separated from their spouses should not have any sexual relations, lest they be charged with concubinage or adultery.

2. Declaration of nullity of marriage declares a marriage void from the very beginning. Children in this type of marriage are considered illegitimate. This legal option is available to minors who married without parental consent and those who were married by an unauthorized person. Bigamous marriages, mistaken identity, and incestuous marriages may also be declared void from the very beginning.

3. An annulment declares the marriage legal until it is declared void. This legal option is available to minors married without parental consent and to individuals who may have been of unsound mind at the time of the marriage. Couples married under deceitful circumstances such as the failure to inform the other party of a sexually transmitted disease, a pregnancy involving another man, criminal conviction, addiction, impotence, or homosexuality may also file for annulment. Article 36 of the Family Code states that a marriage can be declared void if one of the parties is psychologically incapacitated to perform his or her marital obligations. This has often been used by couples seeking a way out of marriages and is sometimes dubbed as the “Philippine de facto divorce law.”

These options, however, cannot accommodate cases that a divorce can. When a woman is a battered wife, she must have the freedom and the right to get out of the marriage and to totally severe the bond that has been destroying her. The existing laws however, fail to address this reality.

During the 15th Congress, Gabriela Women’s Party representatives Luzviminda Ilagan and Emmi de Jesus refiled the Divorce Bill (House Bill 1799) as an additional option for ending an unhealthy marriage, and as a means to reintroduce divorce into the Philippine legal system.

Historically, divorce was once part of the Philippine legal system. In the 16th century, before the Spanish colonial rule, absolute divorce was practiced widely among certain tribes such as the Tagbanwas of Palawan, the Gadangs of Nueva Vizcaya, the Sagadans and Igorots of the Cordilleras, as well as the Manobos, Bila-ans and Moslems of the Visayas and Mindanao. Divorce was also available during the American period starting 1917, and during the Japanese occupation until 1950.

When the New Civil Code took effect in 1950, divorce was disallowed under Philippine Law, which allows only legal separation. This was adopted by the Family Code of 1988, although the code introduced the concept of “psychological incapacity” as a basis for declaring a marriage void. The 1987 Constitution is silent, thereby not prohibiting the legalization of divorce.

Divorce dissolves the conjugal partnership, with the assets equally divided between the spouses. But the bill also proposes that the spouse who is not employed shall be supported by the employed spouse for one year. This provision addresses the economic deprivation that most women experience because of marital break-up.

Since the divorce bill was first discussed in the House of Representatives on June 1, 2011, the question “Are we ready for a divorce law?” has dominated discussions and debates in the media and in informal conversation.

But it is not meant to break up the Filipino family, as detractors claim. According to the Gabriela bill, it is just another option to get out of an already failed marriage. Divorce is all about the individual’s right to reclaim a dignified and secured life. It can also protect a battered woman and her children from further violence in the case of an abusive relationship.

Is this country ready for divorce? It can only be so when we recognize that if a person has the right to enter into marriage, he or she also has the right to get out of it if the union is no longer healthy, and is in fact life-threatening for both of them and their children.