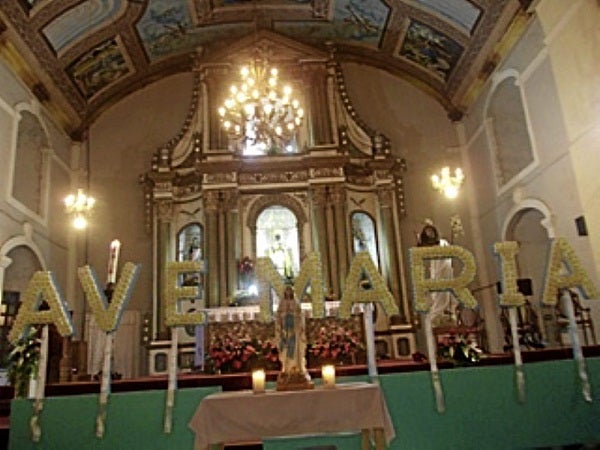 Everywhere we went, in Tagbilaran, Dauis, Loay and Loboc in Bohol, we would espy families, neighbors and communities taking part in the Flores de Mayo. At the Loboc Church on a Saturday afternoon, we saw schoolchildren all dressed in white, singing Marian hymns.

When time came to offer flowers to Mary, younger girls with tiny cotton and cardboard wings clipped to their upper backs lined both sides of the central aisle while the rest of the children queued with their humble floral offerings, all the while singing hymns in Boholano.

It was a scene straight out of childhood—or at least the childhood of the fairly senior members of the Jimenez clan—and evoked memories of an innocent time, a time of simple faith, a time of family togetherness.

Some 62 members of the clan founded by Ildefonso and Pacita (Tabuena) Jimenez of Sorsogon, Sorsogon flew into Tagbilaran last May 18 to observe the clan’s Flores de Mayo tradition. Tagbilaran was where the clan was founded, where it all began for five generations.

It was understandable why lola Pacita would choose the Flores as the Marian devotion she would adopt when her prayers for a cure for her paralyzed legs was granted 68 years ago. At that time lolo Ponso was assigned to Bohol as the provincial treasurer, and when she was finally able to walk that summer day, lola Pacita must have seen how the Flores tradition permeated the lives of residents in the towns and barrios of Bohol, leading her to decide to popularize the tradition among her family wherever it was her husband’s peripatetic career brought them.

And so the Flores has lived on, through the War, through the family’s many migrations, through changes in circumstances and the growth of the clan. Sixty-eight years later, it was time to revisit the place where the tradition began.

It fell on two members of the clan—my cousin Edgar and sister-in-law Coratec—to shoulder much of the planning and preparations for the grand Bohol reunion. Coratec, who is also general manager of the Metro Manila Development Authority, asked the Tourism people with whom she regularly coordinates to get her in touch with Bohol Tourism personnel to draw up an itinerary for our group and assist with arrangements.

(Another cousin, Ramon, known to all of us as Monette, is tourism secretary but had to beg off from joining the trip. But perhaps in tribute to him, we all wore T-shirts, designed by my niece Charm Tan-Cardoso Salavante, declaring: “It’s more fun being a Jimenez… in Bohol!”)

And so we had a full day’s schedule, combining the most popular tourist spots (the Tarsier sanctuary, Chocolate Hills, Dauis and Loboc churches, and the Loboc River Cruise) with sentimental visits to the childhood stomping grounds of the senior Jimenezes and meeting with friends from their youth.

We also enjoyed a sumptuous lunch in the Flores family home in Loay, where May, wife of cousin Ray Pascual, was born and spent her youth. Meeting in Tacloban, they returned to Loay to get married, with older Boholanons marveling at how their union had “brought back” the Jimenezes to the province and established life-long ties.

Indeed, high on the agenda of the surviving elders of the clan, especially my aunt Chulia Azarcon and uncle Ramon Jimenez, was to meet up with friends from their childhood. Upon arrival in Tagbilaran, the first item on their agenda was a visit to the home of Jose Ma. “Ondoy” Rocha, a former mayor of Tagbilaran and one of the closest friends of the family, especially of two late aunts: Carol Pascual and Elvira “Baby” or “Be” Jimenez, who were the teenagers in the family during their stay in Bohol. There they were joined by two more friends, Flora “Inday” Liban and Teresita “Tita” Lapes, as well as by tito Ondoy’s son, Fr. Jingjong Rocha, SVD, daughter Mitos and granddaughter Carla.

As old friends do when getting together, they reminisced on the fun times they had growing up in Bohol, reconstructing from memory what Tagbilaran used to look like back then. The next day in Loay, another old friend, retired Judge Gertrudes Fernandez Bernaldez, a classmate of our Tita Be, joined the family for lunch, marveling at old pictures published in the Jimenez book “In Search of Family” of tita Be as a student in Bohol. I do believe the retired judge even saw a picture of her young self!

There was another surprise visitor who joined us at our Flores de Mayo celebration in Loboc Church. As Inday Flora Libay tells it, she had left Bohol to live and work in the States but decided to retire in her home province.

“I used to think that my old friend Chul had passed away, as I had no information about her,” she told me. “But when I read your column last January (where I wrote about the Jimenez family reunion), I confirmed that not only was she still alive, but had plans of visiting Bohol!”

But it wasn’t only the “senior” members of the clan who had the time of their lives in Bohol.

On our first evening, almost the entire clan met up at the famous Bohol Bee Farm for dinner. I had long wanted to visit the place, but somehow missed dropping by in my previous visits to Bohol. What we saw that evening was extremely gratifying, with structures fashioned from wood, bamboo and nipa scattered throughout a hillside. Our group, including some of my Braganza cousins, settled on a pavilion overlooking the seafront where we enjoyed a buffet dinner washed down with refreshing glasses of tanglad juice flavored with wild honey. We were later joined by the Pascual “delegation,” while the rest of the Jimenez cousins and their children swooped down on an upper pavilion for their own buffet spread.

We also spent a lot of time in the souvenir shop, stocking on bottles of exotic-flavored honey (molave honey, anyone?), souvenir items and memorabilia.

On the bus on the way back to our lodgings and even the next day, “entertainers” from the family livened the proceedings, special mention going to Beatles life-long fan Bon Jimenez, and multifaceted talent (singing and dancing on a moving bus!) Manoling Jimenez.

My cousins from Tierra Pura (because the family home of tito Ramy and my late tita Flor, and of tita Chul and my late tio Dodoy and their daughter Lani is in that subdivision), including another cousin, Linda, who flew in from Los Angeles, and her siblings were billeted at the posh (judging from the photos) Amorita Resort, which I understand is owned by a friend of one cousin, Carina Mirasol.

Our group of Jimenezes, Braganzas (our maternal cousins) and some Pascuals were billeted in the rest house owned and managed by Holy Cross University in Tagbilaran which is in turn managed by the good SVD (or Society of the Divine Word) fathers, though the overspill had to be accommodated in the rest house next door, owned by a Filipina and her Japanese husband.

Easily the highlight of the clan reunion in Bohol was our Flores de Mayo observance in St. Peter the Apostle Parish in Loboc. Many thanks to parish priest Fr. Alger L. Angela and parochial vicar Fr. Alvin Pusta for accommodating our request for a special Mass!

After touring the magnificent interiors of the Spanish-era convent beside the Church, we trooped into the charming interiors of Loboc Church to find a group of children conducting their own Flores de Mayo observance. We gladly waited for their own rites to be over before we held our Mass, celebrated by my brother, Fr. Boboy Jimenez, SVD. We even shamelessly hijacked the “Ave Maria” backdrop prepared by the children!

Thanks to the local tourism officials, we were able to book the world-famous Loboc Children’s Choir for the Mass and when Fr. Boboy asked how many of them had travelled abroad, almost all raised their hands. Turns out the present choir had just won in an international choir competition in Europe!

Most amusing was when we were getting ready for our own floral offering when my cousin-in-law Achie, wife of Edgar, wondered if we vocally challenged Jimenezes would dare ruin the magical atmosphere created by the angelic voices of the Loboc Children’s Choir. Fortunately, the children stayed on (and joined us as we said the Rosary) to lend their voices as we approached the statue of Mama Mary with floral offerings. Never had the hymn “Immaculate Mother” sounded more heavenly!

Still, even as the afternoon sun waned, we all felt a familiar inner glow, warmth brought on by tradition and family, remembering how our clan’s devotion began with our lola Pacita’s promise, and how we of the succeeding generations had found our own deeply personal meanings in the simple rites of offering flowers and prayers for Mama Mary.

One more surprise awaited us after dinner on board the famous Loboc River Cruise, highlighted by the delightful performance of villagers entertaining tourists on the river banks. Highly recommended by Bohol’s tourism officials and our guides was the Loboc Ambassador Youth Band. I didn’t know what to expect, and, indeed, kept my expectations low for fear of disappointment. Who knew, indeed, that this small town of Loboc hid a rich resource of musical talent? As our guides pointed out, “every child in Loboc is expected to sing well or play a musical instrument.”

The Loboc Ambassador Youth Band is composed of young townsfolk who undergo musical training in hopes of gaining college scholarships by way of membership in college bands. Their performance that night at the Loboc Children’s Theater was lively, energetic, inventive and utterly delightful, especially a young boy playing the trumpet who stole every scene he was in.

It was nearly midnight by the time we all got back to our lodging places. For some of us, an early morning ferry trip to Cebu awaited. Others had planned a longer stay to enjoy Bohol’s charms further, while the rest of our delegation had morning flights back to Manila. But for everyone, it was a bracing trip back to the origins of a family tradition, a trip that brought us closer to the beginnings of a wandering family and clan, united not just by love, but also by memory and enjoyment of each other’s company.