The Queen and I | Inquirer Lifestyle ❮ ❯ 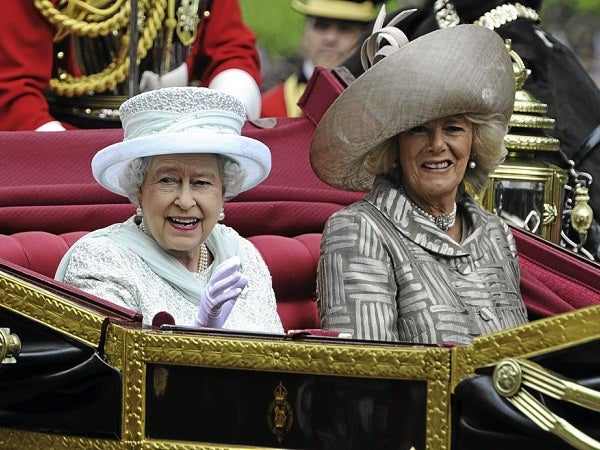 The Queen and I

LONDON—In a country where a hundred years can seem like the tick-tock of a quickening clock, the four-day celebrations to mark Elizabeth II’s 60 years of uninterrupted sovereignty and service to the people of Britain and the Commonwealth of Nations were an excuse to put aside—if briefly—our woes and cares, to dress them up with miles of bunting and silly hats.

Years of scrimping, belt-tightening and fears for the economic meltdown of the eurozone have made us angry, anxious and morose. Gaiety, wrote Yeats, transfiguring all that dread.

Here was a chance to loosen our stays, party and gawp—breathless with emotion—at spectacular tableaux: the equivalent of eating a box of fondants and chocolates and a big tub of ice cream—in one sitting. Four days to wave our Union Jack (even if made in some dusty Chinese sweatshop), bask in a sea of national pride, thump our chest, muddle through the second verse of the national anthem and suffer excitable TV anchors’ diarrhea of hyperbolic adjectives and tired clichés. A great dry run for a fantastic summer of fun and Olympics—rain or shine.

Four days pregnant with symbolism. So what if we got cold and wet? So what if it’s Cool, rather than Rule, Britannia?

Many disasters have befallen the world; there are gerontocratic, calcified, sclerotic and brutal regimes carrying on regardless. Here we were—regardless of where we were born or where we came from—in “this little world, this precious stone set in the silver sea,” proud to be British.

For a horse-mad queen, the Derby (horse race) at Epsom on Saturday was a fitting start to celebratory tributes.  On Sunday afternoon, 1,000 gaily festooned vessels—a motley fleet of historic ships, leisure craft and working boats crewed by 20,000 men and women—turned the majestic River Thames, in the heart of London, into a resplendent floating theater for a royal pageant flanked on both sides of the river by over a million exuberant well-wishers.

The river pageant was inspired by a 1748 Canaletto painting, “The Thames on Lord Mayor’s Day.” Between the 14th and 18th centuries, London’s powerful Lord Mayors conducted ostentatious processions on the Thames to demonstrate the city’s maritime superiority and wealth and to show allegiance to the throne.

“The Thames is no ordinary waterway,” wrote Winston Churchill. “It is the golden thread of our nation’s history,” which records that Richard III was the first monarch to travel on the river, in a silk-canopied barge, to his coronation in 1483. Full of love and brio, Henry VIII conveyed the second of his six wives—Anne Boleyn—via the Thames, in 1533, to her lavish coronation. Three years later and along this very same route, she traveled to meet her executioner.

When Elizabeth I died, in 1603, her night-time funeral procession was along this historic stretch of water as, lit by torches, the muffled oars “at every stroke…did tears let fall.”

Over 400 years later, here was Elizabeth Alexandra Mary, elegant in a white ensemble studded through with Swarovski crystals, aboard the central vessel of the pageant—the royal barge “Spirit of Chartwell”—for the seven-mile procession from the Tower of London to Tower Bridge, as bells up and down the land tolled, her subjects cheered and music played on and on.

In freezing 7°C, the flotilla moved at a stately 4 mph, even when it started to bucket it down with driving, wind-lashed rain. Intermittently waving to the sodden crowds, our queen variably smiled, frowned, gurned, pulled a long face and tightly pursed her lips. Was she unhappy? Was the procession going on forever?

Her eyes lit up at the sight of Joey and the War Horse on the rooftop of the National Theatre. They being stalwart and stoic, the queen and Prince Philip—91 today and dashing in his naval dress uniform—refused to sit down on the red velvet thrones specially built for them on deck.

The finale was an ear-busting cacophony of foghorns, klaxons, bells and whistles. The end, when it finally came, was a relief.

At the rear end of the procession, the 64 musicians of the London Philharmonic Orchestra played a jolly sailor’s hornpipe which made Prince Charles and his father do the briefest jig.

The heavens poured out a torrent, but the Royal College of Music Chamber Choir, thoroughly soaked, gave the joyful bravura performance of their young lives in a rendition of the patriotic “Land of Hope and Glory.”

Across the Atlantic, Jon Stewart (“The Daily Show”) quipped: “It was a magnificent spectacle that you could almost see through the inside of a car wash that is England in June. They’re not dancing, they’re shivering!”

Up and down the country and in parts of the Commonwealth, street parties, picnics, dances, hot-air ballooning, sausage-throwing and other jinks were being held.

The fountain of Savoy Hotel, on London’s Strand, was filled with 600 liters of gin punch for revellers. Commanding the best possible river view of all, the Oxo Tower, on the eighth floor of a building on the south bank, charged £500 per person for lunch.  Around the world—beginning in New Zealand at daybreak—4,000 beacons were lit, creating a chain of light.

“A fading imperial power when Queen Elizabeth took the throne,” appeared in The New York Times the following day, “Britain now stands, by its own measure, in the second rank of nations, measuring its status by accomplishments in arts and sciences more than its diminished international clout. Yet the queen has provided a stability that has made the changes easier to accept.” Shame we don’t send miscreants and troublemakers to the Tower anymore.

Because a lifetime’s sterling work deserves a soundtrack, we serenaded Her Majesty outside her London house on Monday evening. With a sturdy lot camping out overnight in the cold and rain, over a million people, including the young, the old, die-hard American, Canadian and British royalists, stood for over three hours along Admiralty Arch, the Mall and outside Buckingham Palace, to be entertained by our top comedians and to dance to the music of aging rockers, pop artists. Stevie Wonder, the mezzo-soprano Renée Fleming, Sirs Elton John, Tom Jones and Paul McCartney belted out one vintage hit after another.

QE2 joined her family—minus Prince Philip who was being treated in the hospital after being taken ill with cystitis—to witness a stupendous son et lumiere spectacular that culminated with the queen lighting the last of the beacons. (Watch out for a plethora of BBC nabobs and artists receiving gongs—knighthoods—and other medals in the next New Year’s Honours List!)

On Tuesday, amid the fanfare, in the grandeur of St Paul’s Cathedral where she was anointed with holy oil at her coronation in 1953, QE2, in a mint leaf-colored coat dress embellished with star-shaped flowers and draped with mint chiffon, cut a forlorn, slightly stooped figure as she walked down the aisle, without Philip—her “strength and stay”—at her side.

This being the last public address of the highly intellectual—and controversial—Archbishop of Canterbury before his retirement, Dr. Rowan Williams delivered a trenchant sermon that lifted our spirits when he extolled the queen’s selfless service and generosity, but also shamed us when he said: “Only altruism can save us from the traps of ludicrous financial greed, or environmental recklessness, of collective fear of strangers and contempt for the unsuccessful and the marginal…we live less than human lives if we think just of our own individual good.”

The weather mercifully held for the royal procession in the State Landau back to Buck House where, from the famous balcony, Her Maj beamed, visibly touched by the tumultuous adulation of hundreds of thousands of people before her.

To her right, 64-year-old Prince Charles and heir to her throne; to her left, bonny Prince William, with Prince Harry, Kate and the Duchess of Cornwall, who, until seven years ago, was a reviled figure for usurping the place of Diana. While there isn’t yet a swell of national affection for her, most have come around, charmed by her humor and the stabilizing influence she has had on Charles’—and the two boys’—lives.

Robust and in ruddy health as she is, there may not be many more years ahead for the 86-year-old great-grandmother.

But this balcony scene of a slimmed-down core of royals signifies the monarchy will continue, endure and remain an anchor of stability in an unstable world; an almost mystical symbol and presence, a reassuring constant in our lives.

QE2 is our head of state, but standing outside politics in a largely ceremonial role, she wields no power to shape our political and economic lives.

Not all of us love her, her dynastic family and what they represent.  They’re not immune to public scorn and are sometimes dragged into the tabloids. The playwright John Osborne described the British monarchy as “the gold filling in a mouth full of decay.”

While it is true that the present government of Scotland wants to secede from the Union, that Australia and Jamaica have made noises about leaving the Commonwealth, and that there are about 10 million republicans in the UK, the findings of a recent poll suggest that the overwhelming support for the monarchy is “almost rock solid throughout the last 20 years, but may have become slightly more positive in the last year or so.”

At 50 odd years, QE2 shows no sign of slowing down. She floats serenely above the passions, frays and tumults, and if she tires, aches or hurts, she hides these well in well-mastered self-effacement. “Hers is a job of concealment as it is a spectacle,” wrote Ben MacIntyre.

We think we know her; we don’t. “In drama as in life,” wrote the playwright Sir David Hare, “the secret of her power has been her silence.”

Unlike her son—the complex, intelligent, sensitive Charles who publicly fulminates against environmental degradations, GM food, ugly architecture—the queen has been circumspect, but for the unreported counsel she has given her prime ministers during a weekly audience.

At 21, Elizabeth was already imbued with her unique mission. In a radio broadcast, she vowed: “I declare before you all that my whole life, whether it be long or short, shall be devoted to your service.”

At the still tender age of 26, when Charles was only three, she ascended to the throne, embracing a life of rigid protocol and duty and, according to Douglas Hurd, a former minister of Her Majesty’s Government, “trained the feelings out of herself.”

Devoted to her horses and corgis, she does not do public displays of emotion or affection, and her speeches are carefully crafted anodyne utterances. If she was stunned by her people’s exuberant show of love and gratitude over the Jubilee weekend, it wasn’t always easy to discern.

We don’t know if she’s troubled by the lack of social mobility, the egregious and uneven sharing of wealth and opportunity in this country today.  There are too many of us; too diverse, but unequal, and we don’t always understand or reach out to each other.

Later, in a broadcast of thanks for the Jubilee celebrations, Queen Elizabeth said the four days were a “humbling experience” that touched her deeply.  Fair wind in your sail and safe moorings, M’am. God save the queen. Send her victorious, happy and glorious!

The Philippine-born author is a British national who moved to England 30 years ago.