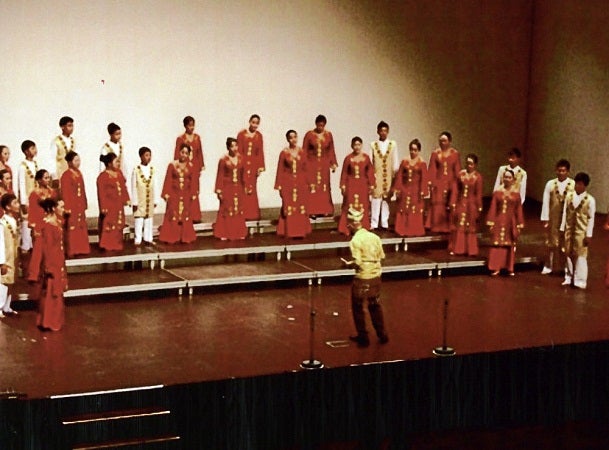 They sang their songs  with a small boy holding a small image of Our Lady of  Peñafrancia   in the recent 18th Certamen International Juvenil de Habaneras y Polifonia in Torrevieja, Spain. Baao Children’s Choir, under the baton of Virgilio Briones, himself a Baaeño, bested 40 other groups from around the world during the elimination, and beat eight choirs during the competition proper on April 27-29. They took home the golden trophy and the 3,000-euro cash prize.

The 18th Junior Habaneras and Polyphony International Contest was organized by the local government of Torrevieja to promote Habanera, a Latin traditional music, among young singers worldwide.

“But the road to the choir’s victory in Spain wasn’t easy,” said Francisco Bulalacao Jr., DepEd Region 5 supervisor and guardian of the choir.

The 30-strong group that flew to Spain had limited budget. There were times the kids felt insecure, especially when they were with other contestants. They were the only group from a developing country, a town no one seemed to have heard of. However, they tried to keep a positive attitude.

Joshua Badilla, road manager, said Baao was the first Asian choir to join the competition. It was the group’s first time to compete outside Southeast Asia.

The Filipino group got a standing ovation and the longest applause.

The choir expressed its thanks to Baao Mayor Melquiades Gaite and the people of Baao.  They helped the choir through a series of fund-raising concerts in Baao and other parts of Camarines Sur and Metro Manila.

Fortunately, the Filipinos in Spain were generous and some OFWs hosted dinners for them.

The choir owes much of its success to Briones, who is regarded as the Bicol region’s most awarded choral conductor.

Briones is the only Filipino conductor who has won five national championships in the National Music Competitions for Young Artists (Namcya), organized by DepEd and Cultural Center of the Philippines.

Under Briones’ tutelage, Baao Children’s Choir (with members ages 11-18) remains the undefeated chorale in the Namcya.

On the third death anniversary of Ramiro Kilayko on April 28, his daughter, pianist Leonor Kilayko invited friends and relatives to the ancestral house in Talisay, Negros Occidental, where she did a solo concert in honor of her father.

Kilayko, Filipino pianist par excellence, was early on “programmed” by her father Raming (way before the era of computers) to be a musician. He would hum operatic arias or symphonies to her even when she was still in her mother’s womb.

That was how Leonor became the concert pianist that she is today.  Her father passed away six hours after her birthday on April 27 three years ago.

It was a full-house performance for family and friends. Instead of bouquets of flowers, Kilayko was presented baskets of fruits, sweets, a chocolate church cake from cousin Dolly B. Lopez, goodies from Filipiniana Tours headed by the Flores family and staff, and lollipops from dearest friend and fan, Yugoslav national Ruska M. Gamboa.

Gamboa was recently widowed. Her husband was Roy Gamboa, a former vice governor. In the concert were Kilayko’s sisters Sony Ng and Annie Javelona.

Unknown to many, Kilayko  is a  philanthropist, donating  her earnings from her performances. She has been donating to the Aeta Foundation, Silag Heritage Foundation, PGH children’s ward headed by Steve Lopez.

This pianist wishes “to bring light to the depths of the human heart,” quoting Robert Schumann.

On Feb. 28, she received a plaque of recognition from the Society for Arts and Culture, a new group founded by Victoria R. Vega. The awarding was highlighted by performances of Bacolod singers  Luis Garrucho and  Ruth Pedrigosa; maramba player Cecile Asico, with Lota Gabiosa on the piano; and organ and piano by  Sylvia Javellana.

Congratulations to Dr. Salve Olalia, wife of brilliant surgeon William Olalia, both from the University of Santo Tomas, for receiving the “Ulirang Ina” award from the National Mother ’s Day and Father’s Day Foundation on May 13 at the Centennial Hall of Manila Hotel.

The couple has seven children. Three are medical doctors, three nurses, one is taking up medicine. A son is a sous chef in San Francisco.

Blessings to Letty Syquia on her birthday on June 15. Her son, Fr. Jocis Syquia, will celebrate the thanksgiving Mass at North Forbes Park Pavillion.   There to wish her well are Letty’s  friends in the apostolate with the Cofradia de la Inmaculada Concepcion, the Manila Cathedral Restoration Committee, among others.