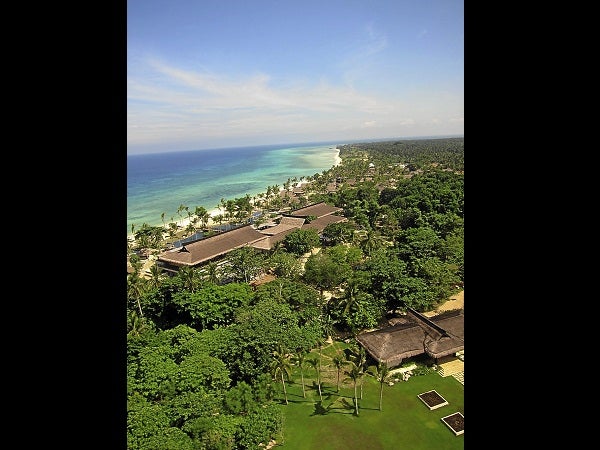 Why Balesin Island should be good for boxed-out Bradley

I’m not really a boxing fan but today, like almost every other Pinoy, I’m watching the latest Pacquiao fight. The hubby and our boys have dragged me to the big screen at the Alpha Tents in Alphaland Southgate Mall in Makati, where, like every other mall in the country, the fight is being shown live.

I’d much rather be in another Alphaland project actually, a much more private and secluded location in an island far, far away from the hustle and bustle of Manila. Alphaland’s Balesin Island Club (www.balesin.com) in Quezon province is only a 25-minute flight away but is mentally another world from the city.

I was there recently for an all-girls overnight getaway. Our group started our island adventure with a bike ride to visit the oldest balete on the island, the tree that gives the island its name. The giant balete is in the midst of a small rainforest and is clearly several decades old. It’s great how the entire island has been eco-planned to preserve as much of its authenticity as possible.

After all that trekking, we checked out Balesin Spa where we had a choice of an individual spa suite or a beach-side massage facility. Each of us girls was billeted in a beach-front villa in the Balesin Village. Our room was huge and fully equipped with such niceties as an iPod dock and a Coffee Bean & Tea Leaf espresso machine. The king-size bed looked big enough to accommodate my hubby and my youngest girl Athena quite easily.

Of course, if the entire family comes, we can opt for one of the Clubhouse Suites, where the kids can be separated just enough to give us that extra bit of privacy. Each of the Clubhouse Suites is a duplex with two bathrooms, and has a direct view of the huge, freeform pool and the sea beyond. It’s perfect for a family of six to eight.

Five other villages are being constructed on Balesin, each uniquely themed to match several high-end resort locations around the world—Mikonos in Greece, St. Tropez in France, Costa Smeralda in Sardinia, Bali in Indonesia and Phuket in Thailand. By December, it will be possible to have a Greek salad lunch, and a golf cart to have French bonbons for merienda and finally a Thai dinner.  And of course, top all that off with a Magnum Ice Cream bar for dessert!

In the event the culinary choices aren’t enough, Balesin’s main Clubhouse is opening its Sakura Japanese restaurant next month. With all that eating, I will really need to spend time on the ocean kayaks and other sports choices in the resort.

Hubby Dennis and I have actually now spent several weekends on the island. On a recent visit with some other couples, we all had the chance to try the latest sports craze, TRX, demoed by fitness instructor Linzi Co (tel. 0917-5352251). Triathlete Larry Ocampo was excited to find a muscle or two that his multi-sports regimen hadn’t covered. I rewarded the couples who survived TRX with Toblerone chocolate bars—the perfect instant gratification.

Thanks to L’Oreal, we were able to enjoy the new Ralph Lauren Big Pony Fragrance Collection as we discovered which scent fit our personalities best.

RL’s Janie Latayan generously shared bottles of the new scent, which we were delighted to sample.

World-renowned Brazilian flip-flop brand Ipanema also gave each of the girls sandals from its new collection of animal prints and seascape designs. At its recent fashion show at Bonifacio High Street, a mystical urban jungle scene was background to the new Ipanema collection.

The city’s style stars were enchanted with the unique designs of the flip-flops, with their refreshingly distinct mix of bright colors and bold prints.

Ipanema flip-flops are just perfect for strolling on the fine sands of Balesin.

Not that crowds are bad, because as we all know, I do like a crowd. The more famous island was recently host to the Dragon Boat Festival, with its main beach filled with teams from all over the world.

The dragon boat competition is one of Boracay’s pride and joy every summer. Fila dominated the scene, sponsoring fierce dragon boat teams like Boracay Bumshell and the Guardian. The former is the brand’s women’s team, which ended up as overall champs in their division.

Over at the Fila beach house, happy hour cocktails were ongoing almost 24/7. Uber-hot Rachel Lobangco kept the temperatures sizzling with a fire-dancing exhibition. And there is no party like a Tim Yap-led party, as the ever-young partymaster and Fila’s Cris Albert kept the crowds entertained all night.

After partying all night, I’ve just discovered the best way to get a full night’s sleep is on my new Tempur bed. Tempur’s new mattress lines have just been launched and I was lucky enough to be one of the first to experience the utmost in sleep satisfaction.

Ernie Lopez and I were invited to be part of a Tempur experiment. We got to try a Tempur mattress of our choice for a month-long test. We chose from three new styles, and I picked the softest one of all—the Cloud mattress. I don’t know whether Ernie chose the Sensation mattress, which provides sturdier feel with maximum support, or the Original, still perfectly soft and firm, contouring to the body’s shape and position. He was all raves for Tempur, so it seems the experiment was successful.

The three mattresses were launched at the Tempur showroom in Greenbelt 5. The event was hosted by restaurateur Malu Gamboa and style chick Leica Carpo-Argosino, who kept all the guests entertained with their witty banter.

Stephen Sy, president of Focus Global, the exclusive distributor of top brands like Tempur, spoke about the company’s thrust in bringing “only the best and top-of-the-line products” to our country. He introduced Dr. Keith Aguilera, director of the Sleep Disorders Center at St. Luke’s Medical Center, who gave tips on how to have restful sleep.

All I know is, after Mr. Pacquiao is through with Mr. Bradley, the best way for him to recover will be to get a good night’s rest on a Tempur mattress.